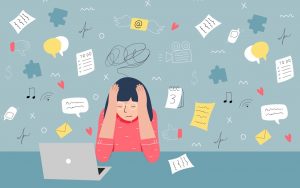 Our survival instinct kept our cave-dwelling ancestors alive, and now we’re stuck with it, for better or worse. In the 21st century, how do we manage our caveman brain, with its primordial sense of fight or flight?

How “Fight or Flight” Works

Back in the caveman days, people faced physical danger, such as an animal attack. According to Harvard Health Publishing, the flight or fight response evolved as a survival mechanism. When the human brain sensed danger, it triggered stress hormones that initiated physiological changes to prepare the body to either get away from the danger (flight) or fight it.

Now, we still have this survival instinct, although we face far fewer physical threats. The trick about fight or flight is that it is triggered by any perceived threat, whether physical or emotional, real or imaginary, according to The American Institute of Stress. Our minds can play tricks on our bodies. As Harvard Health explains, your body can overreact to modern stressors that aren’t actually life-threatening, and this can trigger excessive hormones that can be harmful to our health.

While you might not be chased by a lion, modern stressors — such as pressure from finances, work or relationships — can cause chronic stress. When your brain perceives danger, such as an upcoming work deadline, it instantly sends a distress signal to the hypothalamus, which is like your brain’s command center. This sets off a series of reactions that provide the body with a burst of energy to quickly thwart the danger. Glands release hormones such as adrenaline and cortisol. These hormones increase your pulse rate and blood pressure, make you breathe faster and release stored blood sugar and fats from your body. This burst of energy was helpful for the cavemen, but today, it can be unhealthy.

Our Phones Stress Us Out

In the 21st century, our smartphones are constantly by our side, reminding us about all of our responsibilities and the pressures we each face. If your phone rings, you may instantly think of a challenging family situation. When you see a notification on social media, it could trigger thoughts of comparison to your peers and feelings of inadequacy. An email ping will often remind you of work stress.

People are addicted to social media, and it is damaging pathways in our brains. This problem is widespread. As many a 43 percent of Americans are constantly checking social media, and this attachment to devices and the constant use of technology is associated with higher stress levels, according to the American Psychological Association.

Give Your Caveman Brain a Break

Our phones can chronically raise levels of cortisol, the fight-or-flight hormone. This triggers the physiological changes that helped cavemen escape, but when it releases in response to modern emotional stressors, it can make our bodies sick. According to the New York Times, just having your phone nearby can elevate cortisol levels.

“It’s a stress response, and it feels unpleasant, and the body’s natural response is to want to check the phone to make the stress go away,” David Greenfield, professor of clinical psychiatry at the University of Connecticut School of Medicine and founder of the Center for Internet and Technology Addiction told the New York Times.

But when you check your phone, you’ll likely find another stressful notification, which could lead to yet another cortisol spike. Chronically elevated cortisol levels aren’t just unnecessary, they are dangerous. The hormone has been associated with increased risk of significant health problems, including obesity, depression, Type 2 diabetes and fertility issues, among others.

In the 21st century, the ultimate survival strategy goes against our instinct: Put down your phone.