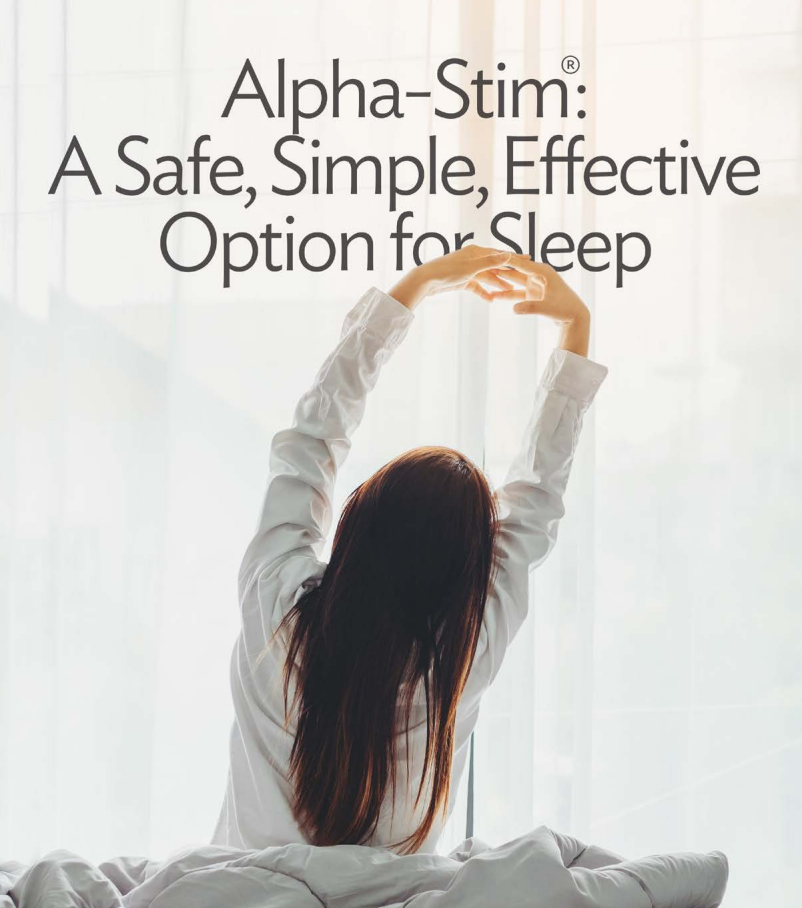 *This is an article from the Winter 2022 issue of Contentment Magazine.

Do you struggle with getting enough sleep? You are not alone. Chronic sleep problems are becoming more prevalent. A recent survey1 found that 61% of young adults, and half of adults over the age of 50, reported difficulty falling and/or staying asleep the previous night. Not surprisingly, stress has been found to have a negative impact on quality of sleep, as almost twice as many respondents who reported high levels of stress reported difficulty sleeping. With a recent Gallup poll showing people worldwide are feeling more stressed than ever,2 it is no surprise that sleep difficulties are also becoming more prevalent.

Many people turn to either medications or supplements, such as melatonin, to help them sleep. However, these sleep aids often come with their own difficulties. Sleep medications, and sometimes even melatonin, can contribute to drowsiness the next day or difficulty waking in the night if needed. As a clinical psychologist, I have worked with patients who, when prescribed sleep medications for prolonged periods, begin to act out their dreams and have awakened in their kitchens, their living rooms, or even in their vehicles (fortunately still in the driveway).

Additionally, sleep difficulties are often exacerbated by, and themselves exacerbate, other medical and mental health issues, such as anxiety, depression, or chronic pain. Sleep disturbances may also be a side effect of medications used to treat these conditions. Simply taking a medication or supplement to try and improve sleep does not address the underlying issue that may be contributing to your sleep difficulties, and thus may lose effectiveness over time.

The good news is there is an alternative that works quickly, safely, and effectively. Alpha-Stim® is a portable device designed to be used at home that is FDA cleared for the treatment of insomnia, anxiety, depression, and pain. Alpha-Stim Cranial Electrotherapy Stimulation (CES) is the only device available at this time that utilizes a patented waveform to transmit a variety of electrical frequencies into the central nervous system. These frequencies help to calm cells that are hyperactive, while simultaneously stimulating activity in cells that are underactive. The electrical current is transmitted across the brain via the use of earclip electrodes that clip onto the earlobes. In the United States, purchase of an Alpha-Stim requires an order from a healthcare provider that is licensed to diagnose and treat anxiety, insomnia, depression, and/or pain. However, in other countries, Alpha-Stim can be purchased over the counter. Side effects are extremely rare, occurring less than 1% of the time, mild, and self-limiting. 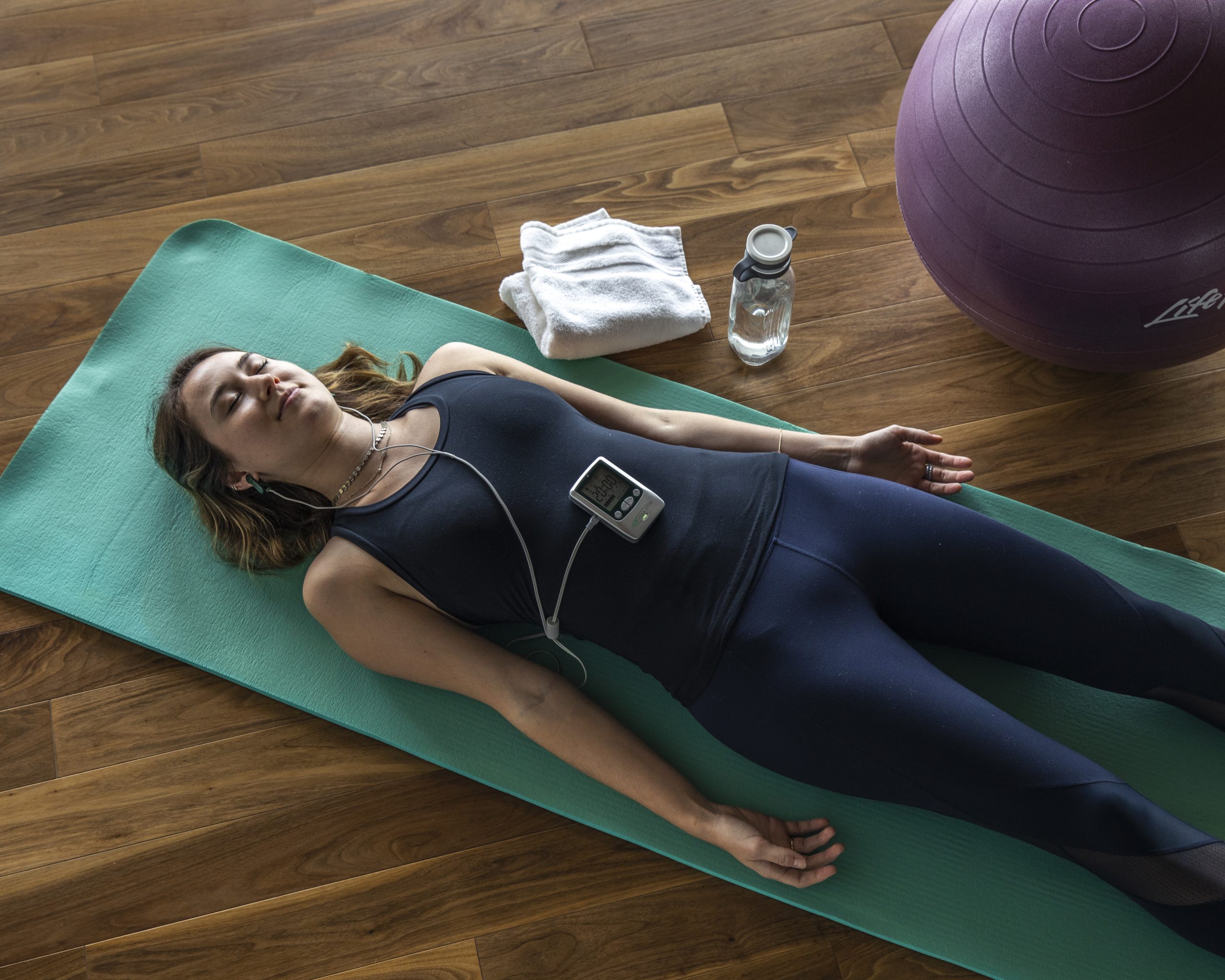 Unlike medications or supplements, Alpha-Stim does not make you drowsy in the moment nor does it contribute to residual drowsiness the next day. In fact, while Alpha-Stim does create a sense of relaxation and calmness, many people also report feeling very alert and focused upon completing an Alpha-Stim treatment. Therefore, it is recommended that people use Alpha-Stim no less than three hours before bedtime to prevent this alertness from further interfering with the ability to fall asleep. In contrast, there are many people who are able to fall asleep during or immediately following an Alpha-Stim treatment, and such people are able to use Alpha-Stim just before bedtime. As mentioned above, Alpha-Stim works to balance the nervous system and restore homeostasis. Proper sleep patterns are part of an optimally functioning nervous system. In contrast to medications and other insomnia treatments, you do not develop a tolerance or become addicted to Alpha-Stim. Quite the contrary, the effects are cumulative, so the more consecutive days you use Alpha-Stim to treat your insomnia, the better the results will be and the longer they will last.

I used Alpha-Stim in my work as a psychologist for the Veterans Health Administration. I have also conducted countless demonstrations with Alpha-Stim as the Clinical Education Director for EPI, the manufacturer and distributor of the device. The results I have seen are nothing short of remarkable. Many of the Veterans that saw me had difficulty falling and/or staying asleep every night. Most of them were on medications that were supposed to help them sleep but did not. After a few days of using an Alpha-Stim, most of these Veterans were falling asleep quickly and staying asleep throughout the night.

I once had a coworker who had chronic and severe insomnia. She had not slept more than four or five hours a night, usually less, over the past few decades. One afternoon she used an Alpha-Stim at work. When she went home that evening, she followed her normal routine, only she fell asleep as soon as she went to bed and woke up over 14 hours later to the phone ringing because she was over three hours late for work. She reported sleeping better than she had in years and stated, “it looked like someone made the bed with me in it.” She did not use the Alpha-Stim that day, and still slept approximately 12 hours the next night.

In May 2022, I was working at a conference, and an exhibitor across the hall from our booth completed a demo with an Alpha-Stim, again about mid-afternoon. The next morning, she showed up later than she had been arriving to the booth the previous days. She came over and stated she had slept through her alarm and was running late. A few hours later, she came back over to the booth and said her FitBit was reporting she had the best night sleep in over a month.

At a conference in Baltimore in October 2022, a health care provider completed an Alpha-Stim demo at our exhibit booth. I saw her two days later, and she reported she was sleeping better than usual, especially for being in a hotel room, and still felt very relaxed and alert.

My favorite example of how well Alpha-Stim can improve sleep comes from a four-time cancer survivor I spoke with recently. She obtained an Alpha-Stim from Roswell Park Cancer Center in Buffalo, NY. When I spoke with her, she stated she had used her Alpha-Stim every day for just over a week, and for the past two nights, she had slept through the night for the first time in 22 years. She was very grateful that she was finally able to sleep well. 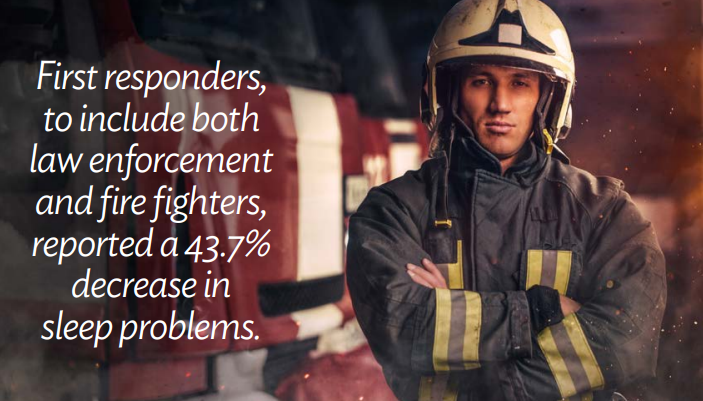 Alpha-Stim can work quickly to improve your sleep quality and quantity, as the testimonials above demonstrate. Scientific research conducted with Alpha-Stim also demonstrates the effectiveness and cumulative nature in improving sleep in a variety of patient populations, as summarized in recently published systematic reviews.3,4 Additionally, a study conducted at Walter Reed5 found that with only five nights’ use, patients using Alpha-Stim reported an average of 43 more minutes of sleep, whereas patients using a sham device reported almost 20 minutes’ less sleep (See Figure 1). 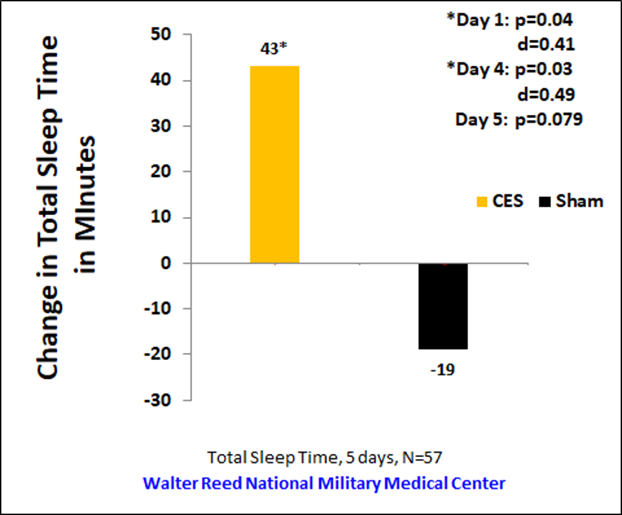 Furthermore, the results seen with Alpha-Stim are cumulative, with results getting better and lasting longer with continued use. A recent study conducted in the UK6 showed that not only did patients’ sleep improve during 12 weeks of Alpha-Stim treatment, but that improvement continued during the subsequent 12 weeks after treatment had ended (see Figure 2).

Two recently published studies7,8 demonstrate the ability of Alpha-Stim to improve sleep in teachers and first responders. After using Alpha-Stim daily for six weeks, teachers reported an 80.4% decrease in sleep disturbances. First responders, to include both law enforcement and fire fighters, reported a 43.7% decrease in sleep problems. Participants in both studies also demonstrated significant decreases in anxiety, depression and pain that may have exacerbated their sleep difficulties, with no side effects. 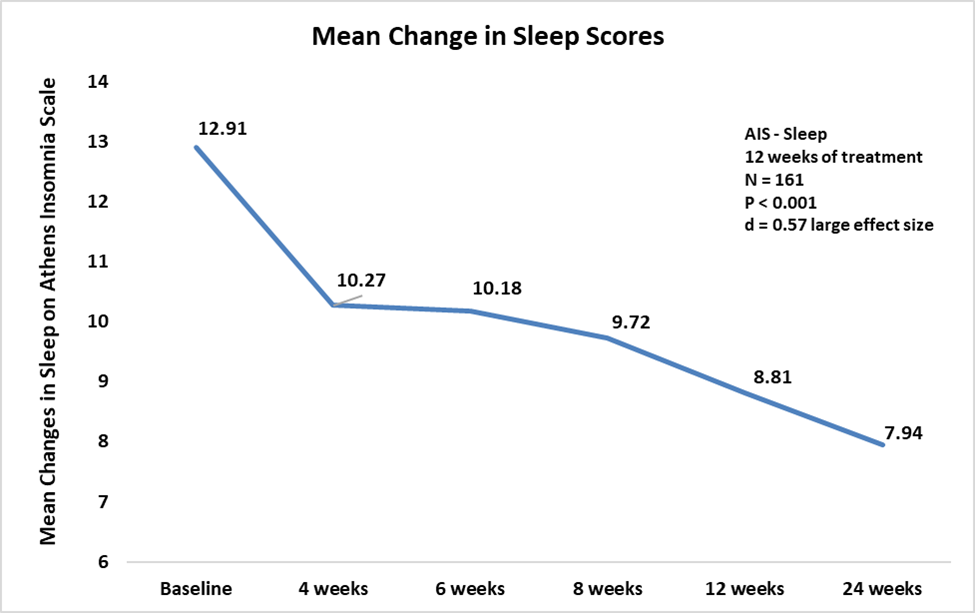 Concomitant with recently reported increases in stress levels, more adults are reporting sleep difficulties. Medications and supplements are frequently used to attempt to improve sleep, but often fall short of being effective and may cause unwanted drowsiness the next day. Alpha-Stim is a safe, easy to use, effective, and cumulative solution to improve both the quality and quantity of sleep, as well as factors such as anxiety, depression, or pain that can be exacerbating sleep difficulties. You can learn more at www.alpha-stim.com. 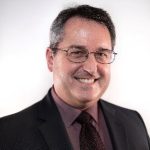 Josh Briley, PhD, BCMAS, FAIS is the Clinical Education Director for Electromedical Products International, Inc., the manufacturer and distributor of Alpha-Stim devices. Dr. Briley is a licensed clinical psychologist who earned his doctorate in clinical psychology in 2003 from the University of North Texas. He began his career at the Federal Bureau of Prisons, where he focused on drug treatment, crisis intervention, and anger management and was quickly appointed leader of the Crisis Support Team and Regional Assistant Team Leader. He went on to work in an outpatient clinic for the Veterans Health Administration specializing in individual and group therapy for PTSD, depression, anxiety, and chronic pain treatment. Dr. Briley has also owned a private practice, taught online undergraduate and graduate level courses, and conducted teletherapy for Betterhelp.com. He is a board member and Fellow of the American Institute of Stress.