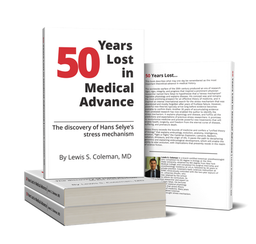 The Stress Repair Mechanism Implications for Anesthesia and Medicine

This work is an encyclopedic investigation into the stress mechanism originally proposed by Hans Selye in the 1930s. As first proposed, the mechanism centered on the hypothalamic-pituitary-axis (HPA) in response to injury and disease. Coleman has re-discovered and extended these observations to develop a Stress Repair Mechanism (SRM) mediated by the vascular endothelium which functions as a vast neuro-endocrine gland orchestrating the vascular and tissue response to injury and repair via the coagulation cascade.1 This is subdivided into a capillary gate component and a tissue repair component. The capillary gate is mediated through the intrinsic coagulation cascade and the gate is opened by NO via the parasympathetic nervous system and insulin and importantly by CO2. It is closed by a number of modifiable factors including sympathetic nervous system activity (modified by nociception and cognition) which generate endothelial Von Willebrand Factor (VWF) release and as a consequence increases blood viscosity, alters capillary bed flow, vascular resistance and decreases cardiac output. The tissue repair component is mediated by tissue factor released by injury, which binds Factor VII and initiates tissue repair orchestrated through thrombin activation. The broad implications of this mechanism are explained at length in the book and culminate in a Unified Theory of Medicine and Biology.

A key feature of the book is a discussion of the influence of anesthesia management on modifying the SRM. It is the responsibility of the anesthesiologist to manage the SRM optimally to maximize patient care and thereby positively influence patient outcome. The SRM can be influenced through anesthesia management in two key ways – by attenuating the nociceptive and cognitive pathways. Nociceptive pathway activity is blocked by use of narcotics and NSAIDS, wound infiltration of local anesthetic agents and nerve blocks. Cognitive pathway activity is altered by sedatives and intravenous and volatile anesthetic agents. Coleman emphasizes that both of these pathways need be managed together to minimize the stress response to surgery. The tissue repair pathway cannot at present be manipulated intraoperatively due to release of tissue factor with surgical trauma. Targeted postoperative management of tissue factor would revolutionize surgical management and maximally control the SRM. Central to Coleman’s thesis is intraoperative CO2 management and the impact of CO2 on the stress response.2 He maintains that modern anesthesia practice with hyperventilation and lower ET CO2 is counterproductive and harmful to patient outcome. He is harshly critical of some of the founding fathers of anesthesiology with considerable opprobrium directed to Ralph Waters and Chauncey Leak and their misrepresentation of the physiological actions of CO2.3 He advocates a return to a prior time when CO2 was added to the inspired gases during the surgical procedure – an approach advocated by George Washington Crile and Yandell Henderson.4 His identification of the SRM and the importance of the capillary gate indicates why higher CO2 tensions are salutary – CO2 opens the gate, releases NO, decreases release of VWF thereby lowering the inflammatory response, lowers blood viscosity, improves capillary blood flow, improves cardiac output, improves tissue oxygenation by the Bohr effect, better ensures delivery of antibiotics to site of action, facilitates volatile anesthetic agent uptake into the brain and removal at end procedure. Optimal anesthetic agent dose blunts the cognitive pathway, which attenuates the sympathetic activation that higher ET tensions of CO2 cause, further enhancing the effect of CO2 at the capillary gate. Supporting Coleman’s proposal are recent works indicating greater mortality and postoperative delirium with lower ETCO2 tensions as measured intraoperatively.5,6

I believe that this book by Lewis Coleman is a very important contribution to the medical literature, especially so to the anesthesia library. It should receive wide readership and initiate vigorous discussion of current medical management. The full implications of this compendious work could well alter all fields of medicine if research based on these ideas bear fruit. Research into the benefits of CO2 supplementation, or at the very least, preventing intraoperative hyperventilation, are easily accomplished studies in the anesthesia realm to begin testing the Stress Repair Mechanism.