Bringing Mindfulness to the Police Department 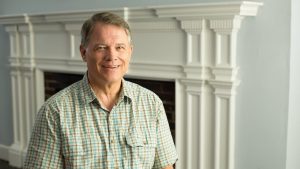 “How cool is it that I can say I practice yoga with my police chief?” a young officer asked Richard Biehl when they ran into each other recently. He was glad to hear the officer was impressed. As chief of police, Richard frequently introduces new classes of recruits to the techniques of yoga and mindfulness practice.

Policing is a stressful occupation. Police deal with everything from active shooters and threats of terrorism to the opioid crisis and domestic violence. They also face closer public scrutiny following the police killings of unarmed people of color.

The ongoing stress can take a toll on officers and may affect their ability to make good decisions on and off the job. Stress also affects how well they handle challenges in their personal lives: Studies have shown high rates of drug and alcohol abuse, domestic violence, and suicide among police officers.

“I tell recruits: ‘You will see a lot of human suffering. And to endure a career of that, and not be tainted with cynicism or overwhelmed by the sheer magnitude of the difficulties you see every day, you’re going to need a self-management tool. You’re going to need a body-mind practice, whether it’s mindfulness meditation or yoga or something else,’”

Mindfulness meditation calms the mind through breathing and relaxation techniques, and, combined with yoga’s physical movement, can help individuals reconnect body, mind, and spirit. The practice helps build greater compassion for oneself and others and enhances feelings of wellbeing.

Richard says his yoga practice has brought tremendous benefits into his life, and he sees it as more than just a tool for stress reduction. “It’s about living a good life, a life where we really are being effective in what we’re doing. We can be focused. The world doesn’t disrupt us as much. There’s this sense of: ‘No matter what happens during the day, I can handle it.’ That’s a great gift.”

Richard has been involved in policing for 40 years, and he’s been practicing yoga for 25 years. Before that, he was a martial artist and weight lifter. What drew him to Lesley’s Master of Arts in Mindfulness Studies program was that it combined Eastern contemplative traditions (such as Buddhism) with Western neuroscience. 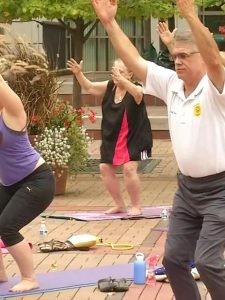 He points out that the U.S. military is experimenting with mindfulness practices to help overcome “attentional lapses”— “when you’re in a high-stakes environment and there’s not a lot going on, but there’s some level of risk or danger, how do you maintain critical attentional skills?” he asks. “We know that mindfulness training, based on the military’s research, shows that awareness is maintained over a prolonged time for those who practiced mindfulness versus those who did not.”

Richard is enthusiastic about the possibilities for mindfulness training in police departments across the country. But he knows that the culture of law enforcement—like the military—is difficult to change. What has made a difference in cities is support from the top: When police chiefs like him endorse mindfulness training, then the practice is much more likely to be adopted department wide.

Police agencies have begun to offer training to help officers handle stress. For example, the Ohio Peace Officer Training Academy created a course called Blue Courage to “help make officers more well-rounded, both on the job and off,” according to the website. The program promotes “the four parts of a whole person: physical, emotional, mental, and spiritual.”

This is good news to Richard. “I think this is going to be an evolution, that we have to get enough experience with mindfulness practice in its various forms, how it fits best within the police environment and how it can help us make better decisions.”