Skip to content
A clinical trial of cranial electrotherapy stimulation for anxiety and comorbid depressionKellie Marksberry2018-06-13T11:45:44-05:00

Objective
The purpose of this study was to examine the efficacy of CES for the treatment of anxiety and depression.

Design
This was an IRB approved 5 week study that used a randomized, sham controlled, double-blind design in which subjects in the treatment and sham groups participated in a daily one hour treatment of CES using active or sham Alpha-Stim CES devices. The sham device was identical to the active CES device, except it did not conduct an electrical current. The active CES device was set to 100 µA, a subsensory level. The subjects, investigators, physicians and staff were all masked as to the identity of the device.

Primary Effectiveness Endpoint
The primary effectiveness endpoint was the change from baseline in the last post-treatment scores on the Hamilton Anxiety Rating Scale (HAM-A) compared to the sham treatment at the endpoint of the 5 week study.

Secondary Outcome Measures
The secondary outcome measure was the change from baseline in the last post-treatment scores on the Hamilton Depression Rating Scale (HAM-D17) compared to the sham treatment at the endpoint of the 5 week study.

Key Inclusion Criteria
• Male and female participants between 18-65 years of age.
• Diagnosis of an anxiety disorder was verified by a licensed clinical psychologist in an interview using the DSM-IV criteria.
• Must score > 15 on the HAM-A.
• Score on HAM-A must be higher than score on the HAM-D17.
• If on antidepressant medication, the medication and dose must be stable for at least 3 months before entering study.
• Must be in good health; chronic medical conditions must be stable.

Key Exclusion Criteria
• Pregnancy, planning to become pregnant or nursing.
• Presence of implanted pacemakers, pumps or electrical stimulators.
• Use of Benzodiazepines more than twice per week.
• Met DSM-IV criteria for an Axis I diagnosis, other than an anxiety disorder.
• Participant judged by investigator to be a risk for suicide or has attempted suicide one or more times within the past 12 months.
• Current alcohol or substance abuse.
• Participants exhibiting a psychiatric condition that would require inpatient or partial psychiatric hospitalization.

Protocol Summary
The Alpha-Stim CES active and sham devices were randomized by the manufacturer and the devices were packed in the device box in the order which they were to be assigned. Subjects were assigned a device based on the order the devices came out of the box. Baseline measures were done prior to the first CES treatment. Subjects had 5 weeks of daily CES treatment for 60 minutes with either an active or sham device. Outcome measures were done at the end of 1, 3 and 5 weeks.

Study Blinding
The subjects, investigators, physicians and staff were masked as to the identity of the device, active or sham.

Power Analysis and Sample Size
A power analysis was done and indicated that for two groups and at least one covariate that 107 subjects were needed for an ANCOVA analysis, an effect size of d=0.50 and p=0.05.

Baseline Measurements: Group Equivalence
There was no statistically significant difference at baseline between active CES and sham treatment groups on anxiety, depression and subject characteristics of age, gender, use of prescribed medication and type of anxiety or depression disorder. 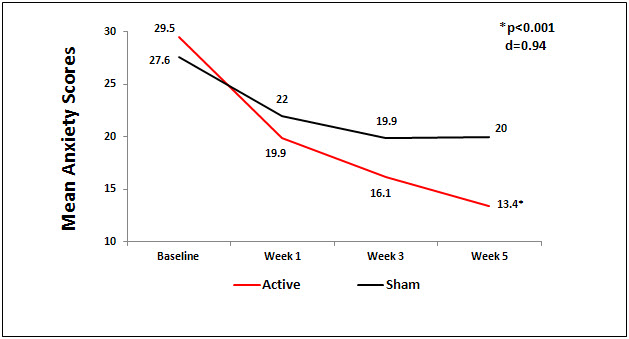 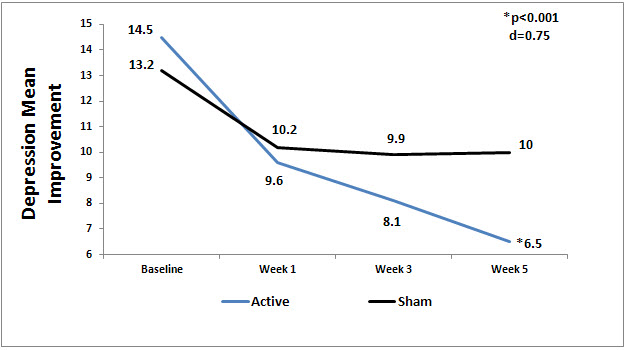 Quality of the Research
This is a strong study that used a randomized, sham controlled, double-blind design and was adequately powered. Active and sham Alpha-Stim devices were pre-set and locked at the designated levels for each specific group (active or sham) to maintain the current level and treatment time by the manufacturer. Sham devices were the same as active, except they did not emit electricity. Randomization of devices was done by the manufacturer and followed according to the protocol by the investigators. Individuals had to meet the DSM-IV criteria for an anxiety disorder to be in the study. Pre-specified criteria for success were established for the study. CES treatments were done daily for 60 minutes for both active and sham groups. ANCOVA was the appropriate analysis for the data on anxiety and depression. All subjects (N-108 at end of study) completed the HAM-D17 at baseline and endpoint of study. A limitation of the study is that the number of individuals within the total groups who met the DSM-IV criteria for depression was small (12 in the active CES group and 11 in the sham group), however the total active CES group had significantly lower scores on the HAM-D17 from baseline to endpoint of study than the total sham CES group (p<0.001, d=0.78). The range for no depression is 0 to 7 on the HAM-D17, so there was ample room for subjects who did not have depression to have lower scores on the HAM-D17 at endpoint of study from CES treatments. This is most likely what happened. Subjects in the active CES group who had depression scored significantly lower on depression scores at endpoint of the study indicating less depression. Subjects in the active group who were in the “no depression” range on the HAM-D17 had lower scores at endpoint representing an improved mood status.