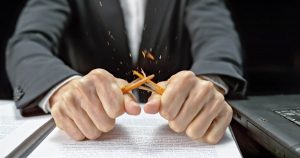 PITTSBURGH (KDKA) – COVID Anger, It is a very real thing, and it’s growing.

You can hear it in people’s voices and see it in a lack of patience.

“We are dealing with extra levels and layers of stress than we’ve ever had to deal with ever before and on a very large scale,” says James Shamlin, LCSW Cranberry Psychological Center. “We’re dealing with more fear and holding onto more stress day today I think allowing us to be a little shorter on sleep and not able to use our coping mechanisms and stress reductions kind of strategies and holding onto our fears of the future.”

Shamlin says we most often let the anxiety and anger flow around those we care about the most because “we expect they are going to be the people who understand us the most. When we’re just not having our best days.”

So, if you feel those emotions boiling up what can you do.

Shamlin says, “It starts with recognizing it and recognizing where it’s really coming from. The deeper it is the stronger it is the less likely it’s coming from what’s in the moment and more so from what’s been building up over time. The more we recognize that the more I think we have the ability to give ourselves some options and handle our own emotions today.”

Shamlin says it’s important to develop coping mechanisms before you need them. Cut yourself a break or just remove yourself from the situation and cool down.

But if you see the anger raising its ugly head in someone else it’s a different story.Carefully assess the situation and who you are dealing with says Shamlin before you try to intervene.

“It’s how we’re pointing out in a way they will understand,” he says. “So for the person who is extra sensitive we want to point out from recognition of showing them a great deal of empathy for why they might be feeling on edge the way they do and show them a gentle mirror for how that edge is coming across. For the person less sensitive they can be pulled aside and told ‘hey you got really loud on that phone call when all I did was ask you how you are feeling today’ or told you some distressing news I can tell you got upset do you want to talk about it.”

If they say no, you might want to walk away but Shamlin until you, “say I’m here for you later is you choose to talk about it. You know the number one thing to defuse any negative tensions is to show understanding more than attempting to be understood.”

Shamlin says the art of understanding is hampered by the wearing of masks, so intentions with a smile may be lost.

“That does take away our ability to communicate on another level, even more, important than the words themselves,” he says.

You are carrying enough of your own baggage and stress. You don’t need to carry theirs.

The adage of counting to ten before you react has never been more important than it is right now.