We met with some friends for breakfast at a popular barbecue restaurant making beef brisket breakfast tacos this morning. A few months had passed since our friend Tom had last been seen and he told us he had been down with COVID. This was the second time he had contracted COVID, but he had been symptom-free for about three weeks.

The problem is that he and his wife received both vaccinations and the six-month booster shot several months before his first bout with the Coronavirus.

Tom is not the only one to report this. While the vaccinations are helping in the fight against Coronavirus, figures from the Center for Disease Control show the rate for COVID hospitalizations and show similar rises and falls in the vaccinated and the unvaccinated. 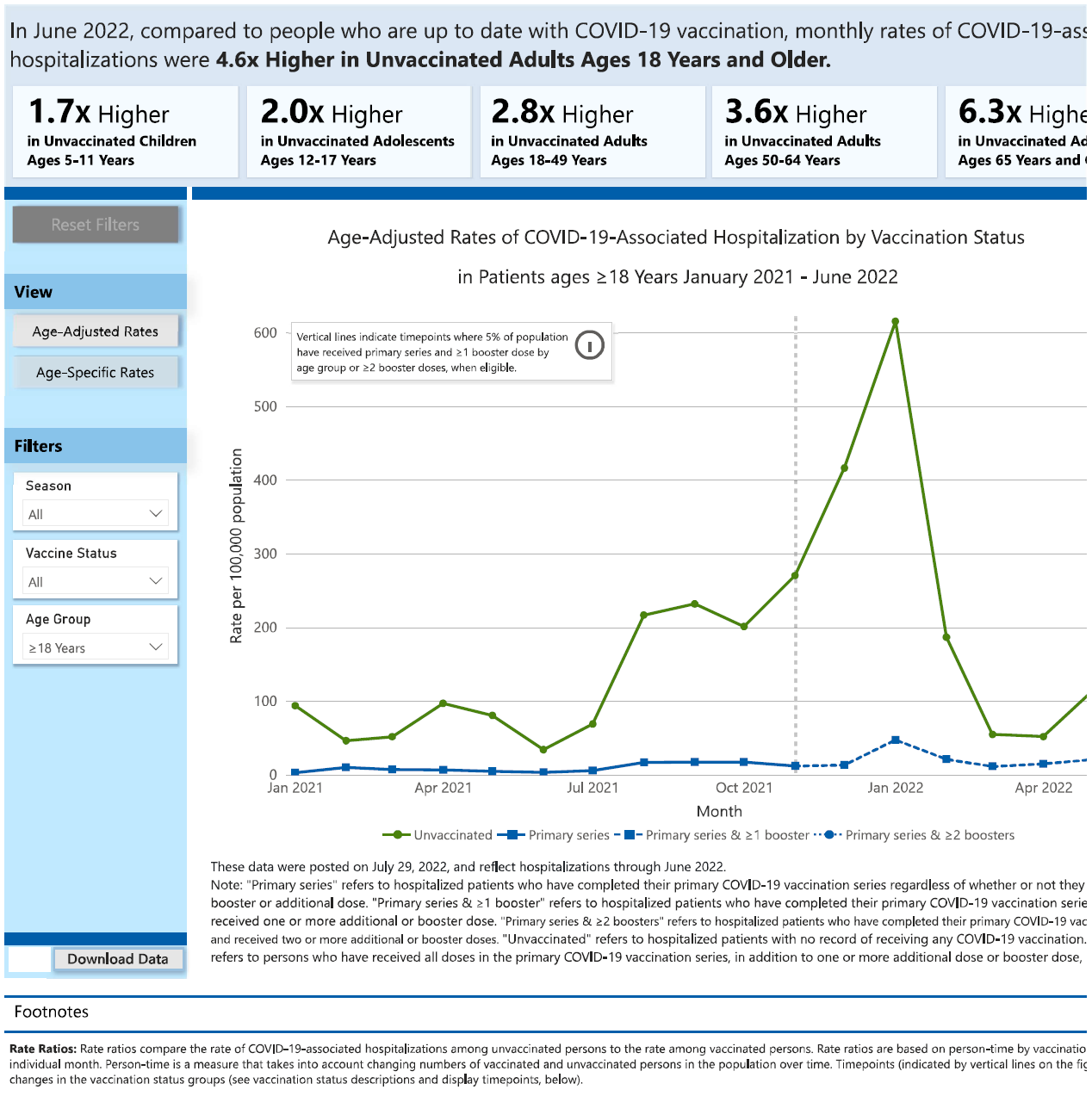 Rates of COVID hospitalizations (shown in blue) for vaccinated patients, from

Is that strange to anyone else? There is a certain school of thought that says an immunization against a disease means one will not get the disease…or is that old-fashioned thinking?

In April of 1955, the success of the polio vaccination (together with the fact that Jonas Salk, MD, chose not to patent it nor to profit from it), led to the nation hailing the good doctor as a “miracle worker.” If Dr. Salk had developed the polio vaccination only to discover that children still got polio, his career might have come to a dead-end…unless, of course, he had a good marketing agent.1 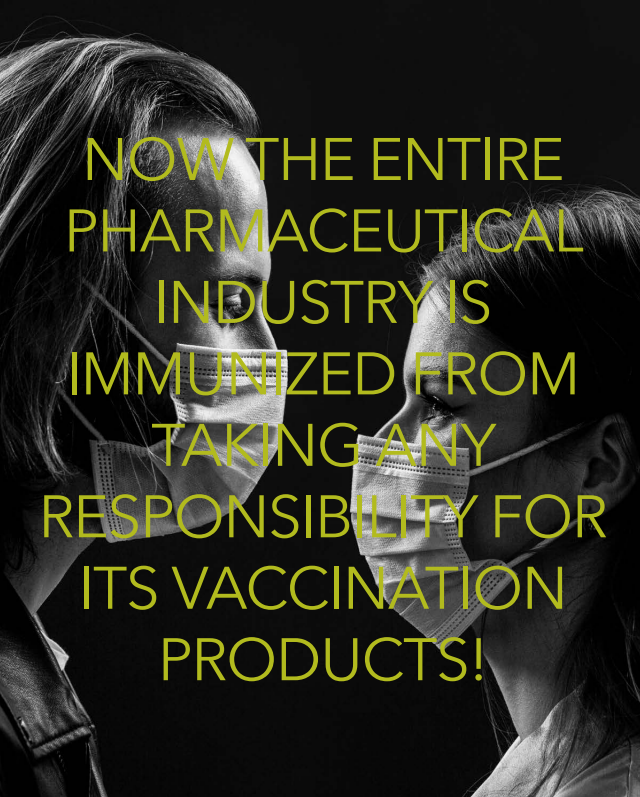 Incidentally, the vaccination that Dr. Salk developed was based on a strain of “killed” polio virus. Opposition to the use of the killed virus vaccination was staunch and unrelenting, as it flew in the face of the prevailing scientific opinion and a medical community of “experts” who refused to believe that the vaccine could immunize against poliomyelitis without harming the patient. After one million people were vaccinated (including Dr. Salk and his family and all of his laboratory assistants) and experienced neither poliomyelitis nor negative symptoms, however, the opposition vanished like a puff of wind.

So it was, in the spring of 2020, that America went into a quarantine, stayed at home, wore masks, and accepted restrictions on travel. Everyone needed to get vaccinated, and the anti-vax crowd faced loss of employment and additional restrictions. The scare tactic was effective and, still today, we see people driving alone in their cars or walking on the beach by themselves, no one around, and they’re wearing masks. Considering the prevailing winds out of the east, perhaps their concern is a cloud of Coronavirus sweeping in from Florida, 850 miles across the Gulf of Mexico.

Meanwhile, doctors in the quarantine who advocated the use of alternate therapies for COVID infection were vilified by the press. In particular, the use of chloroquinoline derivatives, Ivermectin, and vitamins C and D, have landed more than one physician in a career-ending loss of licensure. Physicians around the nation are expected to parrot out the medical advice of “experts,” who rely on hastily collected information to form clinical practice guidelines. With misreporting of death information tied to increased hospital funding and avoidance of negative publicity, causes of death related to vaccine administration are difficult to assess.

In short, the current delivery of vaccinations worldwide has been less than fully effective in the prevention of COVID, and the current clinical practice guidelines have come short of reversing deaths related to Coronavirus. Changing those recommendations – or challenging them – has been shown to be deleterious to the careers of many healthcare providers.2

The man providing medical leadership during the quarantine was Anthony Fauci, MD, heading the National Institute of Allergy and Infectious Diseases (NIAID) in Maryland. In his position, he has little official authority for policy development and implementation. However, by skillful use of the mainstream media, what Fauci says becomes national policy. In one writer’s words,

“[Fauci] was constantly traveling and speaking to the media and opining about everything related to…research and treatment. In Arthur Kahn’s book, Winter Wars, Larry Kramer pointed out that to get an appointment with Fauci, one didn’t call his secretary, but his press officers, ‘who book [his] talks and interviews…like movie stars.’”3

These words were written about Fauci, but not about the current COVID concerns. This was quoted from the 1993 book by Arthur D. Kahn commenting on Fauci’s involvement in the national response to Aquired Immunodeficiency Syndrome (AIDS) in the mid-1980s.

It seems doctors were told at the time to use certain treatment modalities, some of which were later proven to be completely ineffective (such as sugar pills used as placebos in double-blind studies). As one of the top researchers at the time of the human immunodeficiency virus (HIV) that leads to AIDS, Fauci stated, “My career and my identity has really been defined by HIV.”4

The draconian policies that Fauci worked to put in place often meant that doctors who experimented with other treatment modalities than Zidovudine (AZT, the only AIDS-fighting drug approved by the Food and Drug Administration) faced revocation of their medical license and censure in professional communities. Does this modus operandi sound familiar? This led to private individuals going afield to find different treatments and making those treatments available to others who had contracted HIV. These “buyers’ clubs” would open the door to membership to other sufferers, then the club would pool their money to send agents across the border into Mexico, Canada, and even China and India to obtain unapproved drugs for the club members, such as Ribavirin, Peptide T, Dextran Sulfate, and DNCB (dinitrochlorobenzene), as well as generic forms of AZT.5

Likely the most well-known and mercurial figure involved in buyers’ clubs was Ron Woodroof of Dallas, whose life and death story was made into the 2013 film “Dallas Buyers Club.” After acquiring the disease, he was told he had six months to live. In reality, he lived seven years following his diagnosis until his death in 1992 at the age of 42 due to pneumocystis pneumonia (PCP), a common end to many who suffer from various forms of immunodeficiency.6

Pneumocystis pneumonia, incidentally, is prevented by Bactrim and other sulfa drugs. Fauci has been criticized for a less-than-enthusiastic response in making this knowledge known during the late 1980s during the AIDS epidemic.3 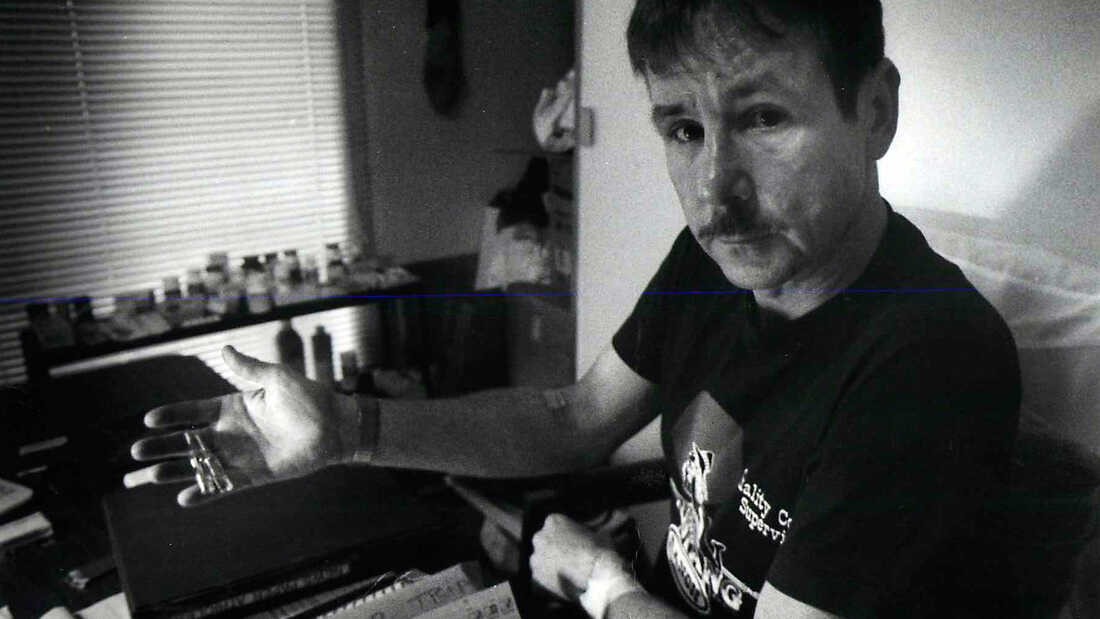 Ron Woodroof shows a vial of Compound Q, a Chinese drug that showed promise in the treatment of AIDS.6

From Anthony Fauci’s position as the head of the NIAID, he was also able to direct grant money intended to support vaccinations used to counter bioterrorism. M-Cam International Innovation Risk Management in Charlottesville, Virginia, has monitored biological and chemical weapons since the anthrax scare in the fall of 2001. A review of the financing for studies of Coronavirus and SARS (Severe Acute Respiratory Syndrome, the 2002-2004 viral specter) since 2002 shows NIAID money siphoned to research in weapons-grade biological agents.7

In fact, Peter Daszak, PhD, and his organization – EcoHealth Alliance of New York – was able to channel NIAID funding (with Fauci’s approval) to the Wuhan Institute of Virology (the laboratory in China widely cited as “ground zero” for the COVID epidemic) for coronavirus research.7

David Martin, PhD, head of M-Cam International, believes the spike protein in Coronavirus is a toxin that damages liver, kidney, and pulmonary functions, as well as increasing circulatory issues such as clotting and micro-bleeds. The vaccines used against Coronavirus are actually coding human DNA to begin manufacturing this toxin, resulting in the eventual death of those who got injected.7 It seems a far reach, until the fact is added that the Public Readiness and Emergency Preparedness Act (PREPA) of 2005 disengages pharmaceutical manufacturers from the responsibility of harmful effects of their products when prepared as a response to a national emergency.8  Talk about immunization! Now the entire pharmaceutical industry is immunized from taking any responsibility for its vaccination products! Pharmaceutical manufacturers can push doses on the American public and up their arms without fear of legal liability. 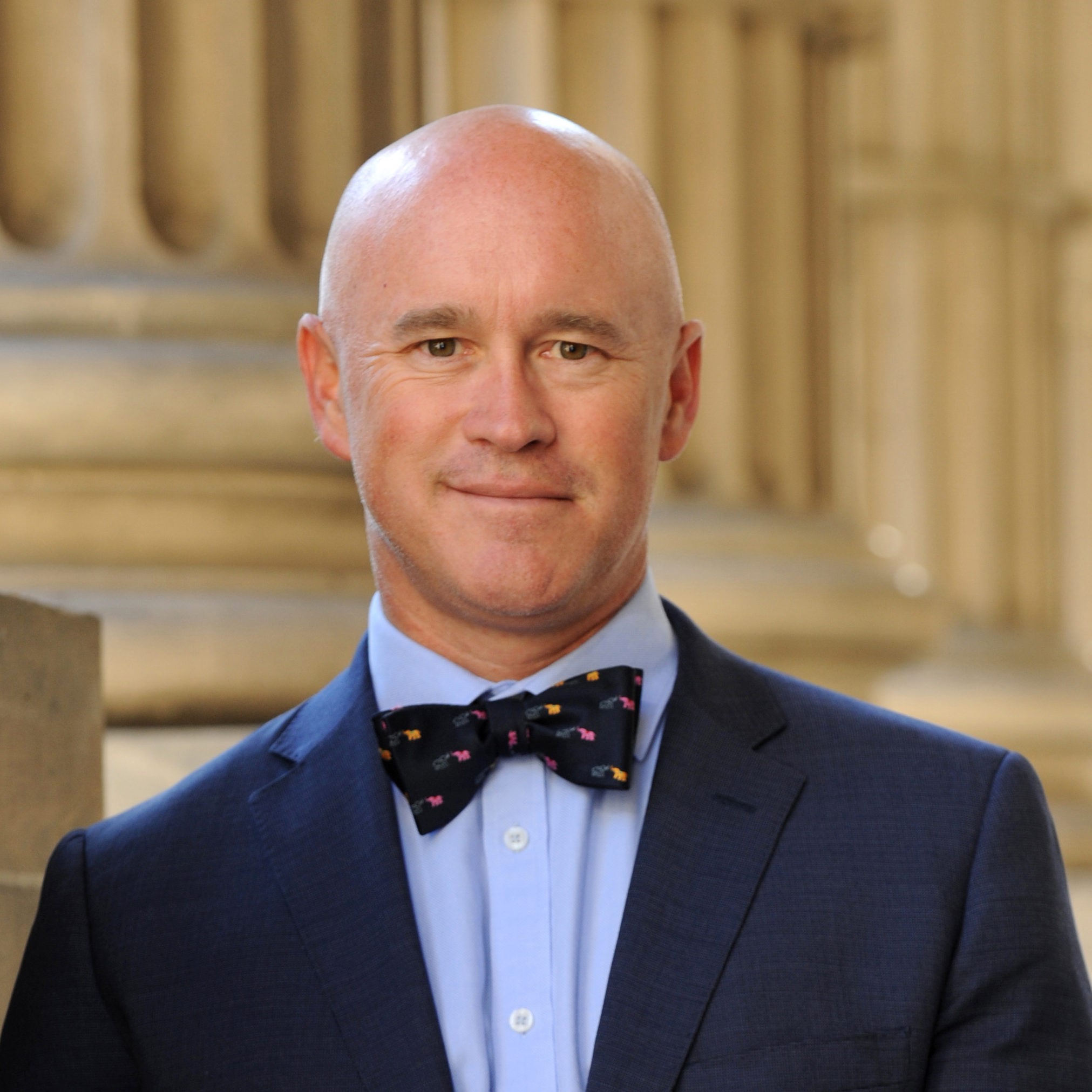 So, the virus can be researched with U.S. tax dollars and vaccinations can be prepared under the legal immunity PREPA offers, without fear of consequence or responsibility. Further, compulsory vaccinations can be administered with the full backing of mainstream media to promulgate fear of an epidemic.

The 91st Psalm comes to mind here. “Save us from the pestilence that stalks in the darkness and the plague that destroys at midday.”9

Wait a minute! Wasn’t the point of the Constitution of the United States of America something about providing for the common defense and promoting the general welfare? WE THE PEOPLE must take a hard look at where our tax dollars are going and who is empowered with the authority to spend it, lest our insouciance creates the weapons of our own demise. 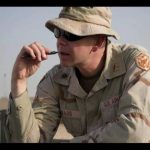 LTC (Ret) US Army, Charlie Bass served in the aftermath of hurricanes, a tornado, a terrorist bombing, and the wars in Iraq and Afghanistan during 28 years with the U.S. Army. In 2014, he retired with his wife to Corpus Christi, Texas.