Funding Source, Location of Study or Author’s Affiliation
This study was conducted at the Department of Psychiatry, Mansoura Faculty of Medicine, Mansoura, Egypt.

Objective
The aim of the study was to determine if CES is beneficial for chronically symptomatic bipolar subjects.

Design
This study was a retrospective chart review

Primary Outcome Measures
All scores were taken at baseline and at 8-week follow up to test for change.

Key Exclusion Criteria
Not specified in the study.

Protocol Summary
Each patient was instructed to set the current between 10 and 500 uA at a frequency of 0.5 Hz, for one or two daily sessions ranging from 20 to 60 minutes each.

Device Application Protocol
The patients titrated their duration and current to their perceived optimal level, nearly always corresponded to 400 µA for 30 minutes daily. Two patients used the maximum setting of 600 µA, for 60 minutes daily. Most patients varied the length of each daily treatment session varied, usually in response to level of distress on that particular day, consequently accurate treatment duration could not be determined.

Statistical Analysis Plan
No formal study hypotheses were articulated, the goal was to use patient records to conduct a retrospective analysis on the effect of CES on the four primary outcome measures. No missing data were present, consequently no missing data mechanism was needed, and no replacement algorithm was used. Therefore, no Intent-to-Treat analysis was conducted, rather, a Complete Case approach was used in all statistical analyses. T-tests were used to determine changes over time.

Data Analysis
The mean (SD) CGI improved significantly 2.7 (0.6) at baseline vs 2.0 (0.0) post-treatment (t=0, PG 0.001], but mood symptoms change minimally. Changes in scores on the MADRS, YMS, and GAF were not significant. There were very few adverse effects of CES.

Depression scores as measured by MADRS revealed a 34% reduction from baseline to posttest at 8 weeks. A 21% decrease in mood variability was reported using the YMS scale. The CGI scale provides an overall clinician-determined measure that incorporates the patient’s medical history, psychosocial circumstances, symptoms, behavior, and functional impairment) and reported significant (25%) reduction (p<0.001), indicative of improved quality of life. 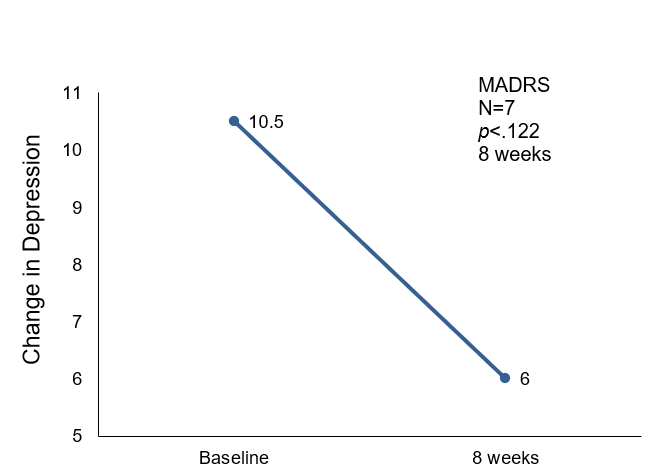 Conclusion
Chronically symptomatic bipolar patients (CSBP) continued to experience symptoms following CES treatment but showed modest improvements. With approximately half of patients reporting the level of symptoms improvement was worth the financial investment in the device.

Limitations
This was a retrospective naturalistic study without a sham group. The small study sample was not sufficiently powered, and power analysis were not possible. In addition, the study lacked consistency in the number of treatments administered per day.