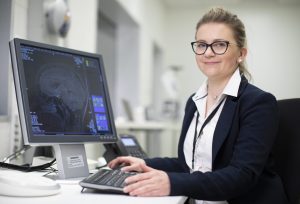 A new study out of Colorado State University has found that physical stress in one’s job may be associated with faster brain aging and poorer memory.

Aga Burzynska, an assistant professor in the Department of Human Development and Family Studies, and her research team connected occupational survey responses with brain-imaging data from 99 cognitively normal older adults, age 60 to 79. They found that those who reported high levels of physical stress in their most recent job had smaller volumes in the hippocampus and performed poorer on memory tasks. The hippocampus is the part of the brain that is critical for memory and is affected in both normal aging and in dementia.

Their findings were published this summer in Frontiers in Human Neuroscience under the research topic “Work and Brain Health Across the Lifespan.”

She added that it is important to understand how occupational exposures affect the aging of our brains.

“An average American worker spends more than eight hours at work per weekday, and most people remain in the workforce for over 40 years,” Burzynska said. “By pure volume, occupational exposures outweigh the time we spend on leisure social, cognitive and physical activities, which protect our aging minds and brains.”

Burzynska explained that the association between “physical stress” and brain/memory were driven by physical demands at work. These included excessive reaching, or lifting boxes onto shelves, not necessarily aerobic activity. This is important because earlier work by Burzynska and her colleagues showed that leisure aerobic exercise is beneficial for brain health and cognition, from children to very old adults. Therefore, the researchers controlled for the effects of leisure physical activity and exercise.

As expected, leisure physical activity was associated with greater hippocampal volume, but the negative association with physical demands at work persisted.

“This finding suggests that physical demands at work may have parallel yet opposing associations with brain health,” Burzynska explained. “Most interventions for postponing cognitive decline focus on leisure, not on your job. It’s kind of unknown territory, but maybe future research can help us make some tweaks to our work environment for long-term cognitive health.”

These MRI images show the location of the hippocampus in the brain. Courtesy of Aga Burzynska

She added that the results could have important implications for society.

“Caring for people with cognitive impairment is so costly, on economic, emotional and societal levels,” Burzynska said. “If we can support brain health earlier, in middle-aged workers, it could have an enormous impact.”

The researchers considered and corrected for several other factors that could be related to work environment, memory and hippocampus, such as age, gender, brain size, educational level, job title, years in the occupation and general psychological stress.

One piece of the puzzle

“The research on this topic is so fragmented,” Burzynska said. “One previous study linked mid-life managerial experience with greater hippocampus volume in older age. Another showed that taxi drivers had larger hippocampi than a city’s bus drivers, presumably due to the need to navigate. In our study, job complexity and psychological stress at work were not related to hippocampal volume and cognition. Clearly, our study is just one piece of the puzzle, and further research is needed.”

The magnetic resonance imaging (MRI) data used for the study was collected at the University of Illinois Urbana-Champaign between 2011 and 2014.

With this new capability, Burzynska, along with Michael Thomas and Lorann Stallones of CSU’s Department of Psychology, is launching a new project, “Impact of Occupational Exposures and Hazards on Brain and Cognitive Health Among Aging Agricultural Workers,” which will involve collecting MRI brain scans and identifying risk and protective factors that could help the agricultural community age successfully. The project recently obtained funding as an Emerging Issues Short-Term Project from the High Plains Intermountain Center for Agricultural Health and Safety.

The Department of Human Development and Family Studies is part of CSU’s College of Health and Human Sciences.