Dayton cops get help to cope with a tragic year

After several tragic events this year, Dayton police and city officials are worried about the cumulative effects the tragedies have had on police officers.

Officers have responded to horrific crime scenes and stressful situations since late May, including the mass shooting in the Oregon District, the devastating tornadoes and a high-speed crash downtown involving a stolen police cruiser that killed two children.

“Many public safety professionals do not see any of those in a career, much less all of them in a period of months,” said Dayton Police Chief Richard Biehl.

Last week, the Dayton City Commission approved additional funding to provide police officers with trauma counseling, intervention, and evaluation from Dr. Katherine Platoni, a clinical psychologist and war trauma and PTSD expert who is a survivor of a mass shooting.

“Dayton PD is to be credited with doing the right thing for its officers, to work with them and assure they are granted everything they need,” Platoni said. “This is the gold standard … I can’t say enough about what they’ve done for their officers.”

Many Dayton police officers worked the KKK-affiliated hate group rally on May 25, which had the community on edge. 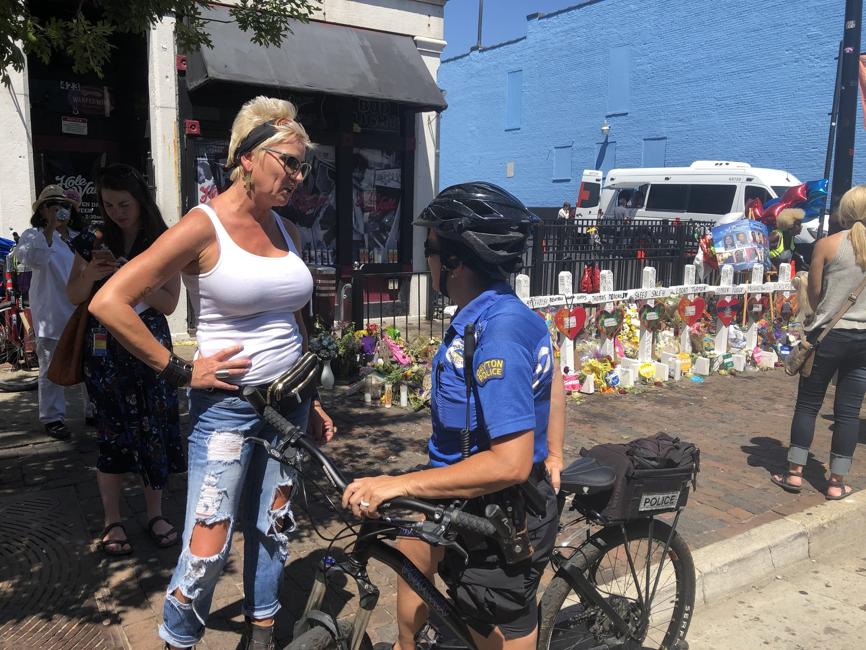 Less than 10 weeks after that, large numbers of officers responded to the Oregon District after a gunman killed nine people and shot 17 others.

Also last month, there was a deadly crash by the downtown Dayton Metro Library, an officer-involved fatal shooting and a double homicide involving two teens.

During the Aug. 4 shooting in the Oregon District, police officers engaged and killed the shooter, but they also investigated and secured the scene, provided first aid, applied tourniquets and transported some of the wounded to the hospital in their vehicles.

As the Associated Press reported on Friday, Dayton officers, like other law enforcement around the country, took on big medical roles after the mass shooting in order to save lives, not just end the attack. Dayton officers started carrying tourniquets on their belts in 2017, the AP reported.

Later that month, Myers and Swiger also responded to the crash at the library, in which a man in a stolen Riverside police cruiser crashed into a van full of children while going 97 mph. Two 6-year-old children were killed and others were injured.

Officer David Denlinger was one of seven officers who received the public safety Medal of Valor for his actions to engage and take down the Oregon District gunman.

He also responded to the deadly crash at the Dayton Library, working along the perimeter, officials said.

Officers, investigators, and evidence technicians have been exposed to these and other tragic scenes and circumstances this year, and there’s been a cumulative impact since some have not had a chance to regain a sense of normalcy, police officials said.

The Dayton Police Department has provided an “extraordinary” response in recent months to extremely traumatic events, and the impact has been felt across the agency, though to varying degrees, largely based on proximity and exposure to the incidents, Biehl said.

Biehl said the city and police department continue to check in with police personnel and connect them with resources to make sure what they’ve experienced on the job is not negatively impacting their personal or professional lives.

Officers are required to meet with a clinical psychologist on call when there are critical incidents, and on Wednesday, city commissioners voted to authorize up to $13,500 in additional funding for trauma counseling services from Dr. Platoni, who has served the department for years.

The city originally approved $10,000 for her services this year.

“We authorized spending more money because of the insane amount of crises we’ve had this year,” said Dayton City Manager Shelley Dickstein.

Platoni said the police department has kept her busy because of the nature, intensity, and frequency of traumatic events they encountered in recent months.

The next four weeks were packed with counseling sessions with officers because the trauma from an event like that is unforgettable and leads to flashbacks, nightmares and recurring mental images and memories from that night, Platoni said.

“You cannot unsee this,” she said. “Nobody gets out of an event like this unscathed.”

Officers and first-responders feel tremendous sadness about the loss of lives during the tragedies and some feel guilty for being unable to save more people, even though their actions certainly were life-saving, Platoni said.

Counseling sessions give officers an outlet to express what they are feeling, which is needed in order to heal, and treatment is tailored to the needs of the individual because a one-size approach does not fit all, she said.

Platoni teaches guided imagery, meditation, controlled breathing and other relaxation strategies for dealing with anxiety, agitation, and other unwanted feelings.

Some officers will continue to struggle, and some have unresolved trauma from terrible things they’ve seen over the course their careers, Platoni said.

But most officers have been released from treatment and are coping and recovering in healthy ways, which can be credited partly to early intervention and debriefing and defusing sessions they were provided, but also because they are speaking openly and honestly to each other about their experiences, she said.

“Because the Dayton Police Department responded so quickly to taking care of its officers so early on in the game, people are generally doing very well,” said Platoni.

Platoni knows firsthand what some first responders and citizens in Dayton are going through because she is a survivor of the November 2009 mass shooting in Fort Hood, Texas, which left 13 people dead.

Dayton officers joined the force to serve and protect the community and they have shown resiliency and have been eager to continue doing their jobs, despite a very challenging spring and summer, said police Lt. Col. Matt Carper, assistant chief.

But, Carper said, “I have been here 27 years and have not seen a year like this one.”