Surveys show that there has been a surprising resurgence in the popularity of knitting and other sewing activities in recent years. More than one in three American women, (some 56 million) now knit or crochet, a 51% increase over the past ten years. Even more impressive is that in the past five years, participation in these crafts increased more than 150% in the 25-34 age group and 100% for those 18-years-old and under. This revival in these hobbies is attributed to their stress reduction rewards. As one college student said, “being able to sit down and just concentrate on one thing such as knitting forces you to slow down and breathe. No worries about scheduling, analyzing, charting or anything else that the ordinary person stresses about every day. Even if it is only for half an hour, it’s a great way to forget everything else for a brief moment and relieve the stress of everyday life.” 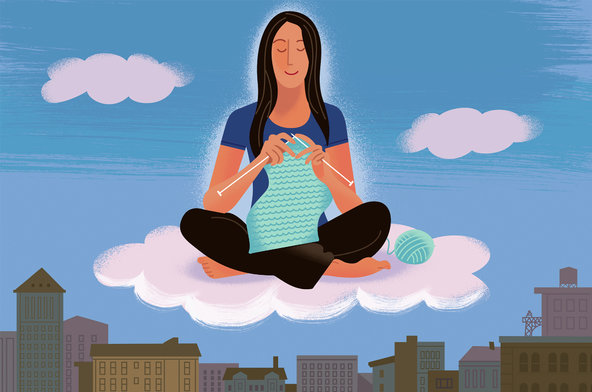 Others agree that the repetitive actions needed for knitting and crochet can induce a “relaxation response” much like that experienced with meditation, Tai Chi, yoga, and other relaxation techniques. One study at Harvard’s Medical School Mind/Body Institute found a reduction in heart rate of 11 beats/minute and a fall in blood pressure during knitting. Many institutions are taking advantage of these health benefits by incorporating knitting and crochet into their activities. Gilda’s Clubs, which offer family cancer support in locations across the U.S., now provide knitting to help with the emotional upheaval of dealing with cancer. At the Duke Diet and Fitness Center, knitting is used to lower stress for its clients. Grade schools from Oregon to New Jersey have incorporated knitting into their curriculum, not only for the health benefits but to help build creativity and improve math skills.

Many consider knitting to be the “new yoga”, since it provides similar benefits but can be practiced anywhere, whenever you want, and for any length of time. Like yoga, knitting forces those who practice it to slow down, take a break from the rush of everyday tasks, to look at the parts that make the whole, and to expand themselves both mentally and physically. However, yoga can be uncomfortable judging from the facial expressions of some, especially those with pain from arthritis or muscle spasm. In contrast, people who are knitting or crocheting always seem to be smiling and happy.