The Mental Health Check-In (MHCI) for law enforcement has been recommended by mental health professionals for decades, however, the pushback from the police community has been strong and consistent. I will provide the full protocol so you can understand what the MHCI entails, who should conduct them, and why officers reject them. Police Psychologists have been pressing for mental health check-ins to become mandatory because of their multiple benefits for the officer, his/her family, the department, and the community.

The number one reason for the rejection of the annual check-in is stigma. To fully understand this, you need to understand the culture itself. Law enforcement personnel as a group are known to be generally conservative and traditional in their views personally and politically. That is not true for all officers, however, law and order is the platform they stand on.

Once they are entrusted with solo patrol, officers become part of the private club in blue. Allegiance to the men and women they work with becomes a necessity because their lives depend on each other. More so now with officers under tight scrutiny as well as emotional, psychological, and physical attack by those they have sworn to protect. As a result of this high-pressure job, they can become, cynical and insular. Police officers can often be described as strong, protective, suspicious and private, and many enter the profession with the belief that they can withstand anything.

They can’t. They have the same human needs as the rest of us. But the lifestyle is brutal. Many have sleep shift disorder from working long hours and then being forced back for another shift. Some officers report being so exhausted that they stand at the back of the room during training so they can stay awake. In addition, officers often have poor diets. Also, they experience a frequent release of stress hormones pouring into their systems. The job stress is also associated with elevated anxiety, depression, marital problems that result in divorce, financial stress, and the list goes on.

You’ve heard the term, thin blue line, which represents the division between law and order, and anarchy. That is what a police officer is tasked with daily, and it is becoming more difficult every year. The divisiveness in the country regarding law enforcement adds to all the other stressors at work and at home with which they are confronted with. Mental health issues occur in this population at an increasingly high rate. The culture dictates that going for help is a sign of weakness – or the person is crazy. If other officers find out one of their own is in treatment for depression, anxiety, substance abuse, post-traumatic stress disorder (PTSD), or any other disorder, they start to worry.

Can he/she be trusted under pressure to perform? Will they be able to back me up if needed on a call? How did they get this way? This couldn’t happen to me. Could it? Can’t they just suck it up? What if someone finds out they went for help? Whom are they talking to and how do they know that the therapist won’t tell people what is discussed in the session? Are they saying anything about me? 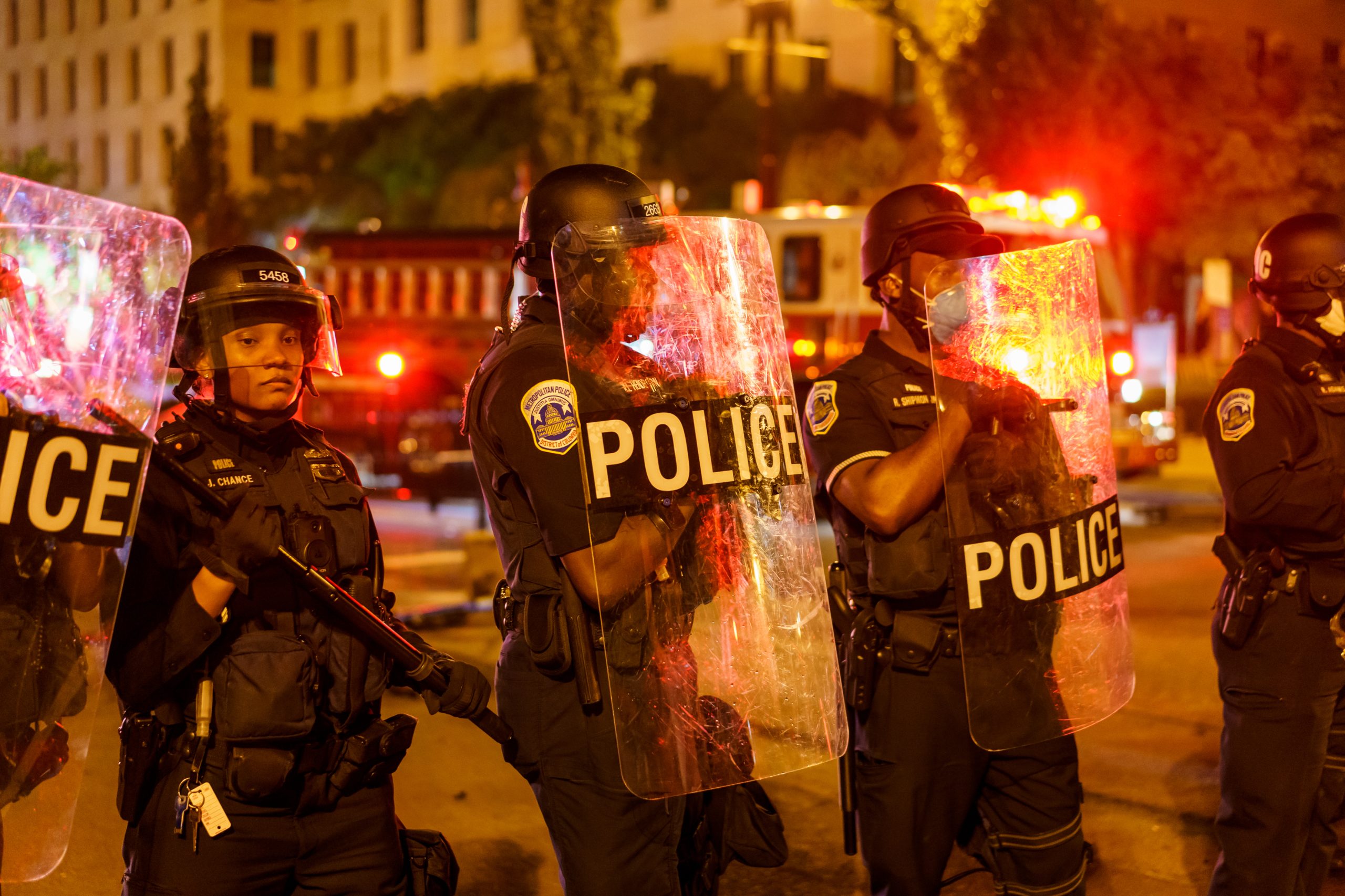 The anxiety about anything personal being revealed or that their thoughts or fears are exposed is not a risk they want to take. There have been some shifts in attitudes among younger officers, and that is a hopeful sign. Concerns about taking medication remain, but they can take medication and still work though some medications they are not able to take because they could affect reaction time or cause drowsiness, which would be a safety concern. They are not encouraged to be self-reflective, or deal with their own thoughts or feelings unless they are related to the job. They often have limited coping skills when overwhelmed with stress, sadness, grief, horror, fear, terror or anger. Anger and frustration are the feelings that are understood and accepted as long as they aren’t acted upon. This might be because policing was only open to males for a long time. Given a choice between anger and tears, anger is certainly more accepted than crying.

Are you wondering why they struggle with feelings, frightening intrusive thoughts, nightmares, insomnia, panic, disgust, and the urge to yell and put their fists through a wall? Some explanatory issues: Police officers are exposed to death on a frequent basis. Other than the occasional investigations of “died peacefully in his sleep,” the injuries and deaths they encounter may be mutilated, bloody, shot, stabbed, raped, tortured, burned, hung or dismembered. And too often the victim is a child. Sometimes they are children of the same age and sex as the officer’s child. For many officers seeing an injured or dead child is the presenting problem in the psychologist’s office, though the officer doesn’t know that yet.

The sights, sounds and smells they encounter are tattooed in them and can be triggers for trauma for a very long list of haunting symptoms. In addition, there are other issues which cause stress, sometimes for a prolonged period of time. Interpersonal struggles, addiction, inhouse organizational pressure, financial problems and other things add to the frequent strain experienced by officers. 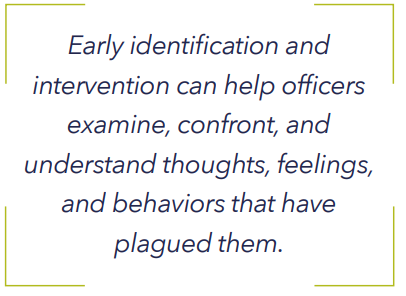 What we do know is that officer candidates enter the profession mentally healthy. They are tested extensively and then begin their careers. Five years later, many are not the same person.

In the U.S., there is no mandatory reporting for police officer suicide. Every government agency that has a reporting system insists on voluntary reporting only. We know suicides have been underreported because all the officers in the department know about them. Most command staff are devastated by a suicide in their department. We all still struggle to understand why in many cases. However, most citizens are unaware that more officers take their own lives than are killed in the line of duty. Policing is lethal.

To identify and understand the variables associated with suicide, Dr. Olivia Johnson, president of Blue Wall Institute, collected 50 data points for a great many police suicides. Analyzing records from coroners, medical examiners, family members, and autopsy reports yielded previously untapped data. Dr. Johnson was able to add to our knowledge about suicide through the psychological autopsy. Fresh research results, and new clinical practices are offered in Practical Considerations for Preventing Police Suicide-Stop Officer Suicide (Johnson, 2021.) Concluding with “The Fatal 10,” a graphic representation of the salient variables, we now have solid data to assist us in training, practical therapeutic methods, and curriculum development.

Early identification and intervention can help officers examine, confront, and understand thoughts, feelings, and behaviors that have plagued them. Developing a confidential relationship with a culturally and trauma-informed clinician can provide safety, encourage insight, allow for collaboration on solutions and build resilience. But the first step in this process is the Mental Health Check-In.

The goals and guidelines for the mandatory Mental Health Check-In include:

The following statement is a standardized example of a letter that could be given to an officer:

“John Smith has successfully satisfied the requirements for the Mental Health Check-In.”

No other information is passed to the department. 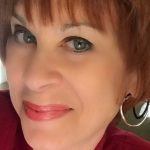 Dr. Marla W. Friedman is a Police/Clinical Psychologist and Chairman of Badge of Life. She is an international trainer, curriculum developer and creates training films for law enforcement. She publishes on issues of mental health, trauma cessation and suicide prevention for police and other first responders. She has trained for the FBI at the National Academy in Quantico VA., ICAC, F TO’s and police departments with her, Building A Better Cop and A Sip of Poison programs. She is adjunct faculty member at the College of DuPage Police Academy (SLEA) She has 35+ years of clinical experience, is fluent in Sign    Language and serves the Deaf and Hard of Hearing Community.

She is trained in offender profiling, detection of deception and interview and interrogation (Reid). She has earned her certification in Investigative Psychology from John J. College of Criminal Justice (NYC). She is a contributor to the new book, Practical Considerations for Preventing Police Suicide (Johnson, O., Papazoglou, K., Violanti J., & Pascarella, J. Editors.)