When feeling stressed, people are more likely to focus on their romantic partner’s negative behaviors rather than their positive behaviors, according to a new study published in Social Psychological and Personality Science. 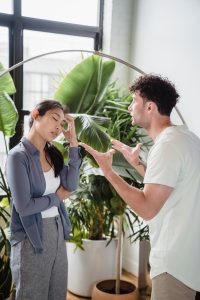 Previous studies have shown that stressful life circumstances can affect how couples interact and influence their individual behaviors. But this study suggests that stress can also affect what people notice in the first place, such as their partner being annoying, impatient, or critical.

“We found that individuals who reported experiencing more stressful life events outside of their relationship, such as problems at work, were especially likely to notice if their partner behaved in an inconsiderate manner,” Lisa Neff, PhD, the lead study author and an associate professor of human development and family sciences at the University of Texas at Austin, said in a statement.

Neff and colleagues did a daily diary study with 79 heterosexual newlywed couples to understand what they went through. The couples completed a short survey each night for 10 days, where they documented both their own and their partner’s behavior. Before the study, they also completed a questionnaire about the stressful events in their life.

Studying newlyweds highlights the significance of the results, Neff said, because couples are more likely to focus on positive behavior and ignore negative behavior during the “honeymoon” period of their marriage.

“One direction would be to examine if the harmful effects of stress might be even stronger among couples no longer in the newlywed phase of their relationships,” she said. “But the fact that we found these effects in a sample of newlyweds speaks to how impactful the effects of stress can be.”

Importantly, a single stressful day didn’t appear to cause partners to focus on their significant other’s negative behavior, the researchers found. Instead, a longer accumulation of stressful life circumstances often caused a shift in focus.

“For many people, the past few years have been difficult, and the stress of the pandemic continues to linger,” Neff said. “If stress focuses individuals’ attention toward their partner’s more inconsiderate behaviors, this is likely to take a toll on the relationship.”

More research could investigate whether it’s possible for couples to correct this behavior if they’re aware of the effects of stress in their lives, she said.