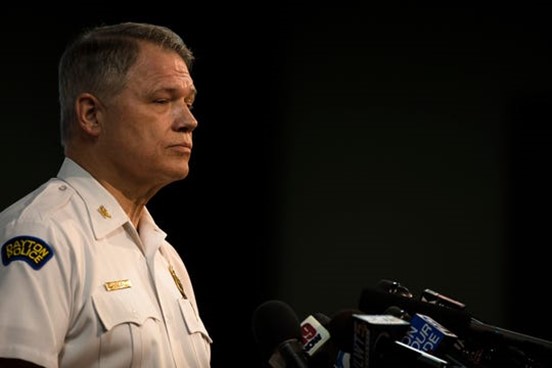 Dayton Police Chief Richard Biehl speaks during a press conference about a mass shooting that left ten dead, including the shooter, and 26 injured along the 400 block of E. Fifth Street, Sunday, Aug. 4, 2019, in Dayton, Ohio.  (Photo: Albert Cesare)

It had already been a long, terrible day when Dayton Police Chief Richard Biehl stepped to the podium to speak to a room full of reporters.

Nine people had been killed, at least 14 wounded in Dayton’s Oregon District.

But as Biehl spoke, his voice was calm, was authoritative. His demeanor meant to reassure citizens Dayton remained safe.

And he was clearly proud of officers who fatally shot Conner Betts, a 24-year-old Bellbrook, Ohio man, within 30 seconds of him firing into a crowd in Dayton’s Oregon District — a quick reaction that prevented even more tragedy.

“While this is a terribly sad day for our city, I’m amazed by the quick response of the Dayton Police that saved literally hundreds of lives,” Mayor Nan Whaley said.

For Biehl, it was another instance of him finding a way to get the best out the people around him, say those who know him.

He did it as a police recruit when he refused to leave others behind when training was physically demanding.

He did it when he championed problem-solving policing instead of using the same old lock-em-up mentality.

And he did it when he took over as Dayton’s top cop, implementing a series of policies aimed at better community relations. 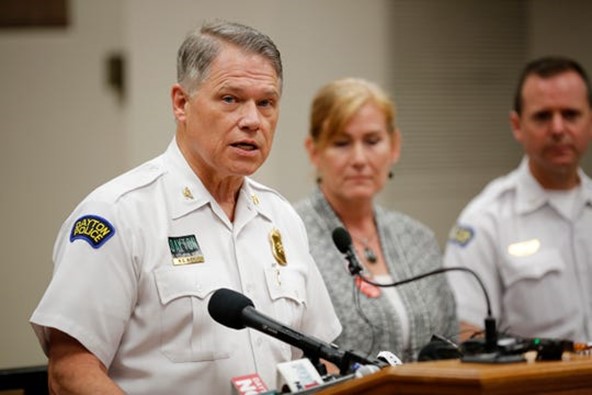 Dayton Police Department chief Richard Biehl gives an update on his agency’s role during a press conference to give an update on the mass shooting investigation at city hall in Dayton, Ohio, on Tuesday, Aug. 6, 2019. The FBI announced that it had uncovered a violent ideology but had not found evidence to suggest the shooting was racially motivated. (Photo: Sam Greene/The Enquirer)

Once a top candidate for Cincinnati police chief

Biehl’s calm demeanor was built on a career spent rising through the ranks of the Cincinnati Police Department, all the way to assistant chief. He held that job for six years, through the 2001 riots and the brokering of the historic police, community Collaborative Agreement.

In 1999, Biehl was one of three people considered for the chief’s job, but narrowly lost out to Tom Streicher.

Biehl retired in 2004 to lead the Community Police Partnering Center, aimed at curbing crime in Cincinnati, for four years before being sworn in as Dayton’s chief in 2008.

“For me, truth comes through struggle,” Biehl said in an email to The Enquirer Monday. “These matters are complex and only with a lot of patience and perseverance can we get to the truth.”

Biehl, now 66, said his time in Cincinnati prepared him to deal with the mass shooting.

“I’ve learned through multiple critical events in Cincinnati that it is important to do the homework to thoroughly examine critical events to determine, to the best of one’s ability, the key factors that contribute to tragic outcomes,” he wrote. “By developing that level of understanding we can learn how to prevent, reduce the harm from, and better respond to these events.”

‘They made a mistake when they didn’t make him chief’

Cindy Combs rose through the ranks of the Cincinnati Police Department with Biehl, starting in the same 1980 recruit class all the way up to working as an assistant chief alongside him. Combs too was on the shortlist to be chief when Streicher was chosen.

“They made a mistake when they didn’t make him chief,” Combs said of Biehl. “Rick is the epitome of a servant leader. He truly puts the community and people he serves first.”

Biehl graduated from Elder High School and the University of Cincinnati, joining the force after a short stint as a store security guard.

Combs, now retired, said Biehl was a leader from the start. Police academy training, especially back then, had similarities to military boot camp. When the recruits would do morning runs there were inevitably some who struggled. Biehl was the recruit who ran back to drag stragglers along, so everyone finished, said Combs.

“He was like that his entire career,” Combs said.

Biehl was popular among officers throughout his career, recalled FOP president Dan Hils.

Hils said officers tend to be conservative, but Biehl was open about having more liberal views. That was noted by officers but didn’t hurt his popularity.

Biehl made the rank of captain within 10 years of being hired, a quick ascension. In 1998, he was named an assistant chief, alongside Combs and Tom Streicher. 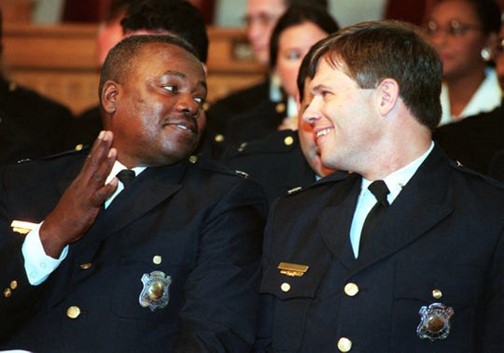 When it came time to choose a new chief the following year, the three vied for the job. Biehl lost out to Streicher.

It was a turbulent time for the department, including a high number of police-involved shootings of black men. In 2001, the fatal shooting of Timothy Thomas, an unarmed black man, erupted into civil unrest.

The collaborative agreement was brokered the year after the unrest, with Biehl working to implement problem-solving policing, then new to urban policing. 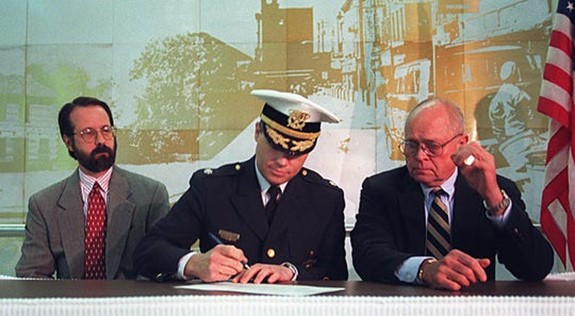 Biehl told The Enquirer in 2002: “If crime is allowed to be only a police problem, I don’t see much improvement in any of the problem areas in our community. Our officers can no longer afford to say ‘Move along, this a police matter.” That is the worst message we could send to a citizen. It probably never should have been a message.”

“In my time on city council, when the city faced major challenges, no person in the chain of command was more impressive than Rick Biehl,” Pepper said of his interactions with Biehl. “Professional and positive, he was committed to partnering with the community, and also focused like a laser on how to address the deeper root causes of crime. He almost felt like a professor when it came to analyzing those root causes.“

The Community Police Partnering Center was created in 2004, born out of the Collaborative Agreement. Biehl was named its first director and retired from the police department.

Dave Bailey, who was an assistant chief at the time and has since left the department, said Biehl was a mentor to him throughout his career.

“Chief Biehl… was a pioneer in examining the social causative factors influencing crime,” Bailey said. “Administratively he treated everyone with respect, and he is absolutely the epitome of integrity and leadership. The City of Dayton should feel fortunate to have him as their police chief.”

As Biehl was making the transition to the private sector, Cincinnati’s homicide numbers were the highest in years. Biehl kept working on the idea that grassroots help would reduce that number.

In his new job Biehl went on to bring the widely hailed neighborhood-based gun violence reduction program, CeaseFire, to Cincinnati.

That program was working and drawing national praise when in 2007 Dayton began the search of a new police chief.

Biehl got the job and started work in January 2008. He bought 27 years of police experience to the job.

One of his first moves was to bring the same type of neighborhood anti-gun violence program to Dayton.

Throughout this week, Biehl has given multiple updates about what happened Sunday.

On Monday, as he shared details about the AR-15 style .223 caliber firearm Betts used to kill, Biehl explained it had been modified to function like a rifle.

And that was troubling to him, he said.

“It’s fundamentally problematic to have that level of weaponry in a civilian environment, unregulated,” Biehl said during a news conference.

Biehl has mostly sailed through his career on praise for his work, with no problems found in his Cincinnati police personnel file or in newspaper archives during his time as an officer.

In 2017, Biehl was disciplined with a written reprimand and ordered to reimburse the city $469 after his gun was stolen from his car, in what a city investigation concluded was not a forced entry.

“I believe (Biehl’s) proven track record of leadership and innovative policing strategies has made the Dayton community a safer place,” Dickstein wrote in a statement then. “My confidence in him as the head of the Dayton Police Department has not wavered.”