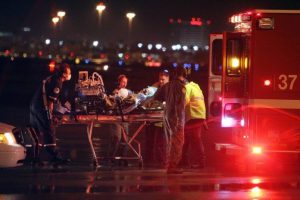 This time, the suicide call led Marion County sheriff’s deputies to one of their own.

The victim was Adam Rendall, a 13-year veteran of the department who took his own life in July 2017. Sheriff Billy Woods, in an emotional video message to the county’s citizens announcing the tragedy, pointed to hotlines where people in despair could find help.

They included a number specifically geared toward cops. George Wallace, a sergeant in the department, wondered whether the community of first responders – cops, firefighters, paramedics, emergency dispatchers – might need more.

What if they were free to discuss with their peers the stress that can build during careers spent cleaning up society’s worst disasters? And could they do it confidentially, free of worry that any suggestion of instability might harm their careers?

Legislation awaiting a hearing on the House floor promises to provide that outlet. The bill (HB 573) would guarantee confidentiality to first responders who unburden themselves about their job stress with colleagues. Exceptions would include confessions to criminal acts or of a risk to themselves or others.

Separate Senate legislation (SB 160) by Keith Perry, a Gainesville Republican, is scheduled for a hearing before the Rules Committee on Monday. Perry has been talking behind the scenes with the sponsors of the House bill, who include Joe Casello, a Democratic former firefighter from Palm Beach County.

Wallace is encouraged at the prospects. “Overall the bill’s a great bill and will do a lot to combat the police suicide issue that we’re having,” he said.

antis invited a group of emergency workers from around the state to the Governor’s Mansion in December to discuss the matter as part of a listening tour she led last year. Attorney General Ashley Moody has also addressed the topic.

The situation is truly dire.

A 2018 study by the U.S. Substance Abuse and Mental Health Services Administration, within the National Institutes of Health, estimated that 30 percent of first responders develop problems including depression and post-traumatic stress, compared to 20 percent among the public.

The report cited estimates of suicides between 125 and 300 per year.

Programs to help first responders prepare for and cope with work stress represent “a cultural shift in fields in which professionals sometimes have coped with disastrous and traumatic experiences on the job by trying to disregard their reactions or using other maladaptive techniques such as substance misuse,” the report says.

“As more first responders discover the resilience they can access through others, and particularly their peers, they become better able to maintain their own behavioral health while addressing the myriad challenges of disaster response.”

Another report, in the Journal of Emergency Medical Services, notes that paramedics contemplate suicide at roughly 10 times the rate of the general public and attempt it at a rate of roughly 60 percent higher. Those w

But “the data suggest that being in a supportive environment isn’t enough. The major factor increasing the likelihood that a respondent would seek help is if he or she was encouraged to seek said help by either their peers or management.”

In an interview, Perry said that after Wallace first brought the idea to him he’d hoped to create some informal framework for peer-to-peer counseling.

“We’ve got programs in place that, if you talk to first responders, they say are not adequate or appropriate. So, the last thing I wanted to do is pass another program. The whole key to this thing is not to have a program – it’s just where you and I can talk as colleagues,” Perry said.

The House bill, actually, would organize the counseling under the aegis of agency commanders – sheriffs, police chiefs, fire chiefs, and so on. It defines “peers” as people with “experience working as or with a first responder regarding any physical or emotional conditions or issues associated with the first responder’s employment.”

The communications would remain strictly confidential absent a waiver in writing with a few exceptions – most importantly involving confessions that “would lead a reasonable, prudent person to fear for the safety of the first responder who was a party to the peer support communication, another person, or society.” Even then, only law enforcement or potential victims could be informed.

The bill doesn’t specify a penalty for the betrayal of confidences but does mention possible civil, criminal, administrative, or disciplinary action.

When most people think of behavioral problems among first responders, they tend to focus on the worst cases, said Michael Crabb, a lieutenant in the Orange County Sheriff’s Office who has been advising lawmakers.

“The hope is that we’re able to get some of these first responders talking to their peers and friends about some of these minor incidents before it turns into a major incident,” he said. “If we start dealing with the small stuff, the big stuff won’t happen.”

Counselors are available now within most departments, but people are reluctant to consult them because of lingering stigma – acknowledging suffering could threaten their standing as big, tough cops, Crabb said. Even though, these days, agency leaders stress that “it’s OK not to be OK” – to admit a problem and seek help.

Peer counselors could serve as ambassadors, go-betweens between first responders and the therapeutic community, he added.

“Sometimes I might just need to get something off my chest, and I walk out of there going, ‘I feel great! Thanks, Bob, I appreciate it, I’m good.’ On the other side, somebody might need more serious help, where the peer support could say, ‘We need to get some professional help, and I’m going to help you do that.’”

In Orange County, the University of Central Florida is using a federal grant to finance peer-to-peer training for civilians dealing with, for example, workplace violence; the university hopes to expand those services to first responders, Crabb said.

“That specialty training from licensed mental health counselors is the key to this whole thing,” he said.

The legislation would leave undefined the specifics about what that training would look like but would allow people in the field to work out what would work best. Perry hopes for a syllabus adaptable to both big-city and small-county departments.

“I know that my peers – the deputies and the officers – want to go to someone they can trust, not necessarily someone that has been picked by the higher-ups,” he said.

Here’s the bottom line for Perry: “It’s high time, given the rate of destruction of our law enforcement peers, that we give them some standing to have these conversations and these relationships so that everything isn’t a matter of a courtroom event,” he said.

“Because they’re not – they’re just lives that need to be coached and encouraged by one another. And it’s proven that this is the most effective thing we can do to encourage them.”