The Physiology and Pathology Of Exposure To STRESS

TO THOSE WHO – IN THEIR EFFORTS FOR GOOD OR EVIL, FOR PEACE OR WAR – HAVE SUSTAINED WOUNDS, LOSS OF BLOOD OR EXPOSURE TO EXTREMES OF TEMPERATURE HUNGER, FATIGUE, WANT OF AIR, INFECTIONS, POISONS OR DEADLY RAYS.

TO THOSE WHO ARE UNDER THE EXHAUSTING NERVOUS STRAIN OF PURSUING THEIR IDEAL – WHATEVER IT MAY BE TO THE MARTYRS WHO SACRIFICE THEMSELVES FOR OTHERS, AS WELL AS TO THOSE HOUNDED BY SELFISH AMBITION, FEAR, JEALOUSY, AND WORST OF ALL BY HATE.

FOR MY STRESS STEMS FROM THE URGE TO HELP AND NOT TO JUDGE.

BUT MOST PERSONALLY, THIS BOOK IS DEDICATED TO MY WIFE, WHO HELPED SO MUCH TO WRITE IT, FOR SHE UNDERSTOOD THAT I CANNOT, AND SHOULD NOT, BE CURED OF MY STRESS BUT MERELY TAUGHT TO ENJOY IT. 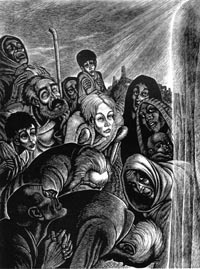 This is from Hans Selye’s Dedication to his magnum opus Stress, with over 1,000 pages and more than 5,000 references that was published in 1950. The frontispiece on the left, which occupied a full page, is from an engraving by Fritz Eichenberg, a German artist who was forced to flee to the United States because of his cartoons and caricatures depicting Adolph Hitler as the devil incarnate. Eichenberg later illustrated many books and is best known for his ability to capture emotion by his portrayal of facial expressions.

The publication of Stress stimulated scientists all over the world and precipitated an avalanche of studies to reproduce and extend Selye’s observations. Selye had a fetish about retrieving each one and classifying it using his own symbolic shorthand system so that it could be immediately retrieved via various key words for his enormous library.