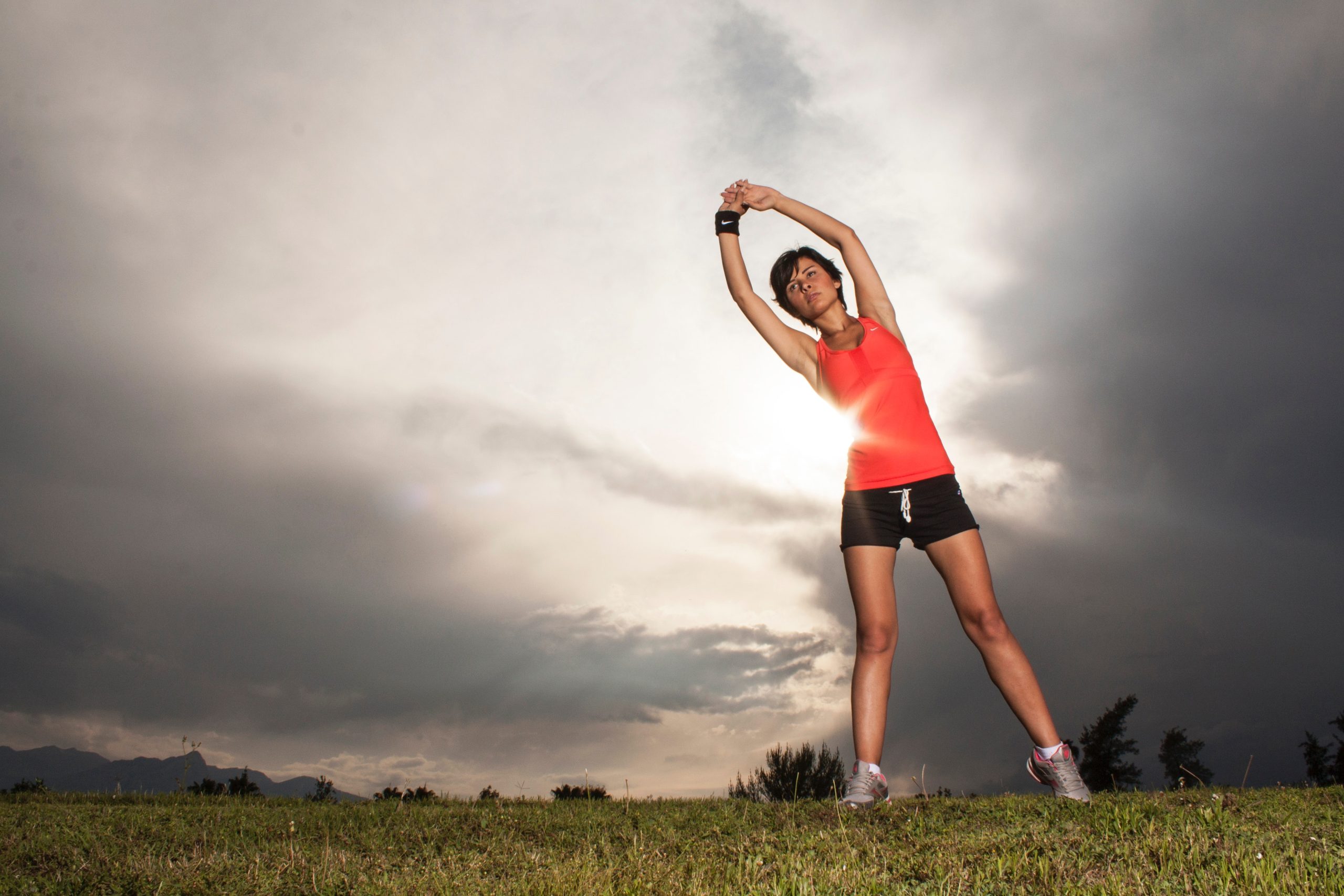 Contrary to what many people think, stress isn’t always a bad thing. It’s the body’s natural response to physically tasking activities — short outbursts can positively impact your performance (via MedlinePlus). Stress only becomes problematic when it’s long-term, says WebMD. To accurately define it, stress is any change that strains your physical, psychological, or emotional well-being, per the World Health Organization. Anyone can experience stress, which can manifest in various ways, including depression, restlessness, or racing thoughts, says WebMD. Chronic stress can cause tension in your chest, stomach, head, or muscles, along with digestive problems and reproductive health issues (via WebMD).

Generally, any type of stress that significantly threatens your overall health can be bad. Statistics from The American Institute of Stress show that approximately 55% of people experience some form of stress during the day, making Americans one of the most stressed people worldwide, per the institute. Furthermore, 57% of people say stress causes them to feel paralyzed. Certainly, stress has serious health consequences over time. According to a 2015 study published in the journal Management Science, about 120,000 yearly deaths in the United States are work-related. It’s no surprise why many health experts recommend at least 30 minutes of exercise daily (via Mayo Clinic). According to the American Psychological Association, 30% of people feel less stressed after exercising, while 53% of adults believe exercise makes them feel good about themselves.

Despite the positive impact of exercise on stress reduction, it doesn’t have to be rigorous or occur in the gym. Some simple stretches are just as effective. 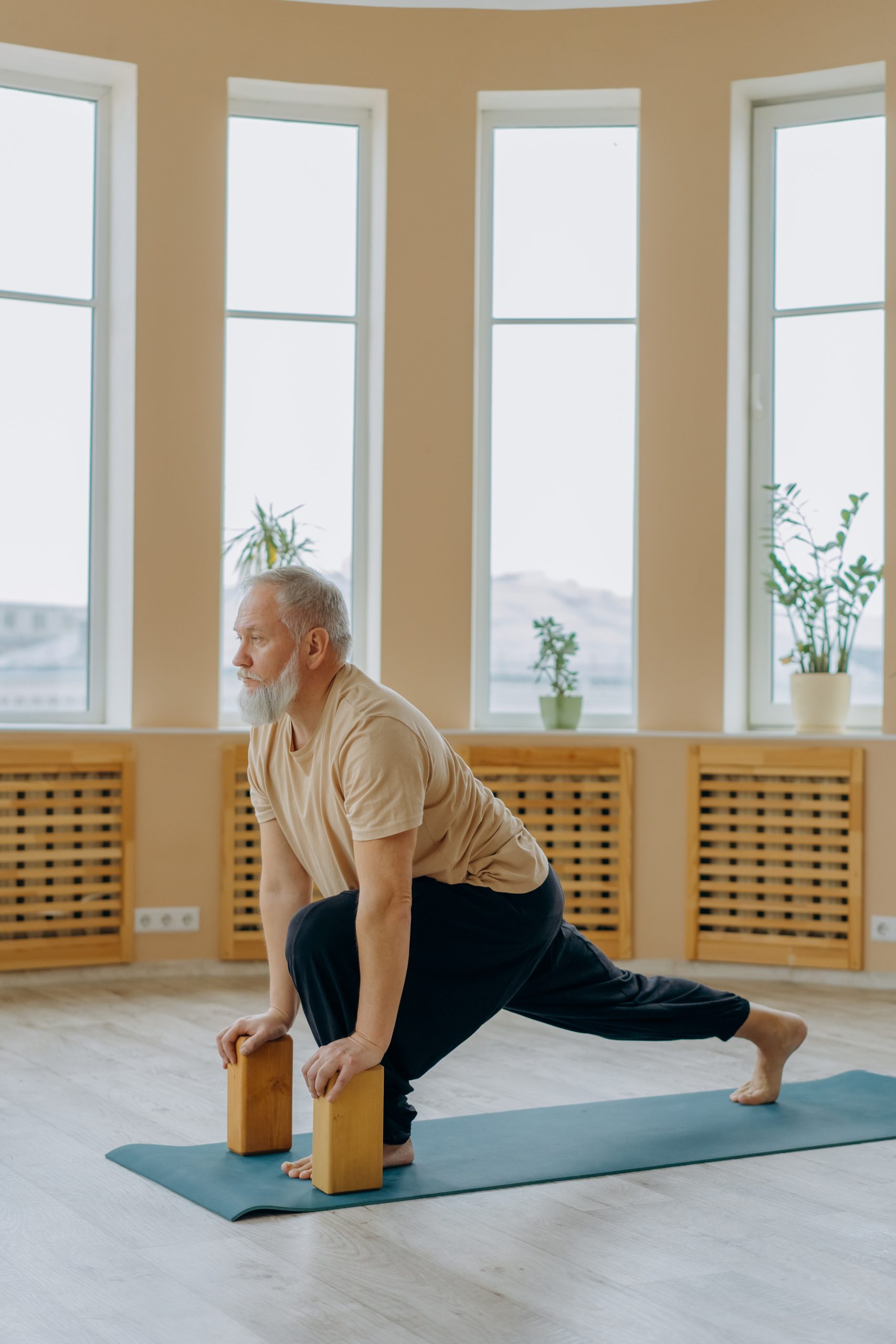 Stretching can impact your overall health in various ways. According to Healthline, committing to a consistent stretching routine can improve posture and enhance flexibility. Usually, old age and sedentary lifestyles can decrease your natural flexibility, but the more you stretch, the slower it takes for these factors to take effect, says Healthline. Stretching is also a mainstay for many sports professionals, which speaks to the positive relationship between stretching and physical and mental health. According to Harvard Health Publishing, performing simple leg stretches can improve blood flow and reduce your susceptibility to heart diseases and strokes. That’s because lower body stretching presses the arteries in the thighs and legs, making them expand and receive more blood flow.

A 2013 randomized controlled trial published in the journal Atención Primaria revealed that even a 10-minute stretching exercise for three months reduced anxiety, burnout, and pain. The study concluded that such a short stretching routine could be considered a low-cost strategy for improving the well-being of workers. Generally speaking, there are enough stretching exercises to explore if you want to enjoy the mental and physical health perks. One example is yoga, which has proven to lower depression, anxiety, and stress, per a 2017 study published in the International Journal of Yoga. According to the study, some specific benefits of yoga may include lowered cortisol levels.

Although stretching has many benefits for stress reduction, it might help to begin with low-impact exercises before increasing the intensity. Be sure to consult your doctor before engaging in any rigorous routine. 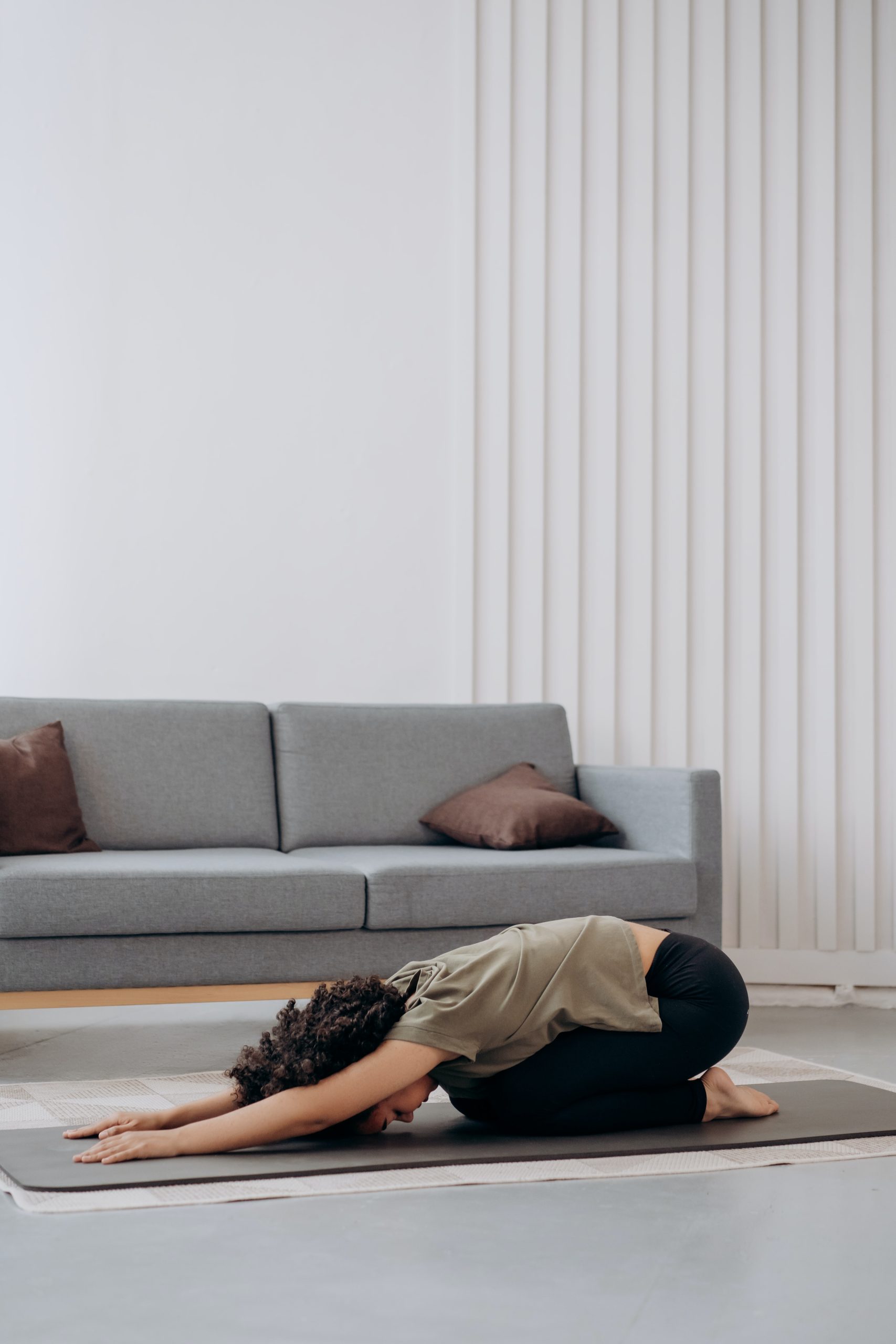 Many yoga enthusiasts are familiar with the child’s pose — a common forward bend. This stretching exercise suits people of all fitness and flexibility levels, per WebMD. It’s restorative in the sense that it helps reset the body for more difficult moves. According to the source, it has evolved from its original names — “shishuana” or “balasana,” coined from the Sanskrit terms. The term “asana” means pose, while “shishu” or “bala,” denotes baby or child.

The pose is straightforward to do. According to Mayo Clinic, you’ll first have to sit on your knees, keeping your buttocks on your heels with your head on the floor. Next, position your arms beside your legs, and place your palms upwards. Next, deeply inhale and exhale slowly about eight times. If you find this pose difficult, another alternative is to sit with your knees slightly apart. You can lead forward with folded arms stretched in front before breathing slowly and deeply for at least eight breaths.

Child’s pose comes with many benefits, including but not limited to the opening up of the hips, the lengthening of the spine, improved sleep, and relaxation (via WebMD). 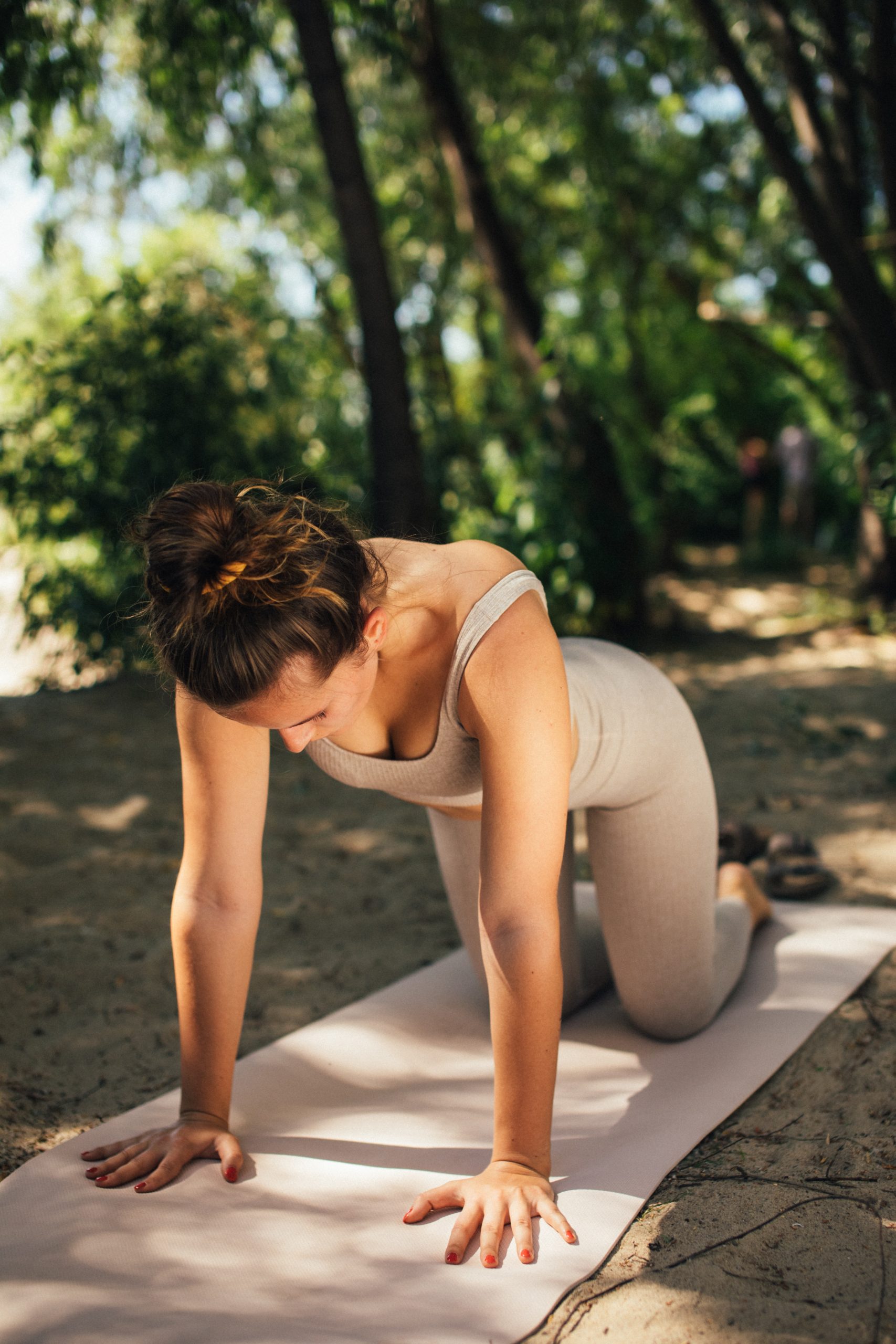 The cat-cow stretch can be a go-to when your body needs a break (via Healthline). It’s a synchronized breath movement that begins with your hands and knees in a table pose. To do it properly, Healthline advises maintaining a neutral spine position with your knees bent and hands on the floor. Next, inhale by lifting your sit bones, sinking your belly, and pressing your chest forward. Raise your head, loosen your shoulders, then gaze straight ahead. To get into the cat pose, your spine should be outward, with your tailbone tucked in and pubic bone drawn forward so you can release your head toward the floor. This pose might be a little sophisticated so it’s crucial not to force yourself into striking it since that defeats the overarching objective of relaxation.

According to WebMD, the cow pose usually involves the hip flexors — these are the muscles involved in flexing your hips which are instrumental to mobility. It also affects the trapezius muscle and erector spinae, which helps maintain a good posture and straightens your back. The pose significantly improves the mobility of the neck, shoulders, and spine and generally works well for people with sustained wrist and knee injuries. Furthermore, it can help reduce stress and improve your overall mental health, per WebMD. 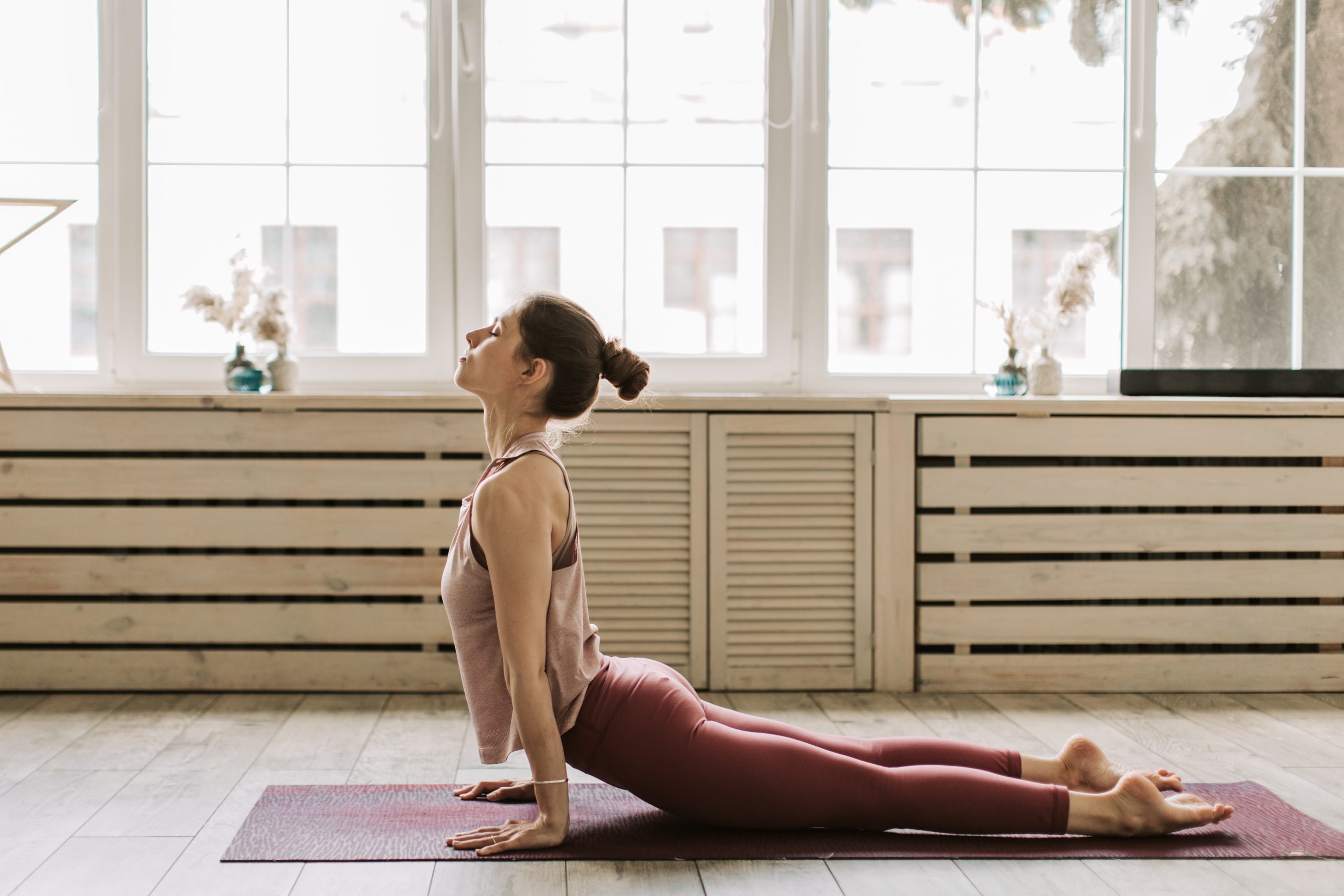 According to MedicalNewsToday, the upward-facing dog is one of the many calming yoga poses. The Yoga Journal defines it as a powerful backbend that lifts the head and improves your posture, which helps fight fatigue and depression.

To correctly perform the exercise, the source advises lying flat on the front with your face toward your mat. Point your toes outwards and downwards. Spread your hands flat on the floor before stretching them out and pushing upwards until your upper body is off the floor. You can then lift your chest and head until your back curves. Keep your shoulders back and take several deep breaths before gently releasing your upper body towards the mat.

Regularly engaging in this stretching exercise can afford you various health benefits. According to the Yoga Journal, it can help boost energy; fight stress; build confidence; and strengthen your back, arms, and shoulder muscles. 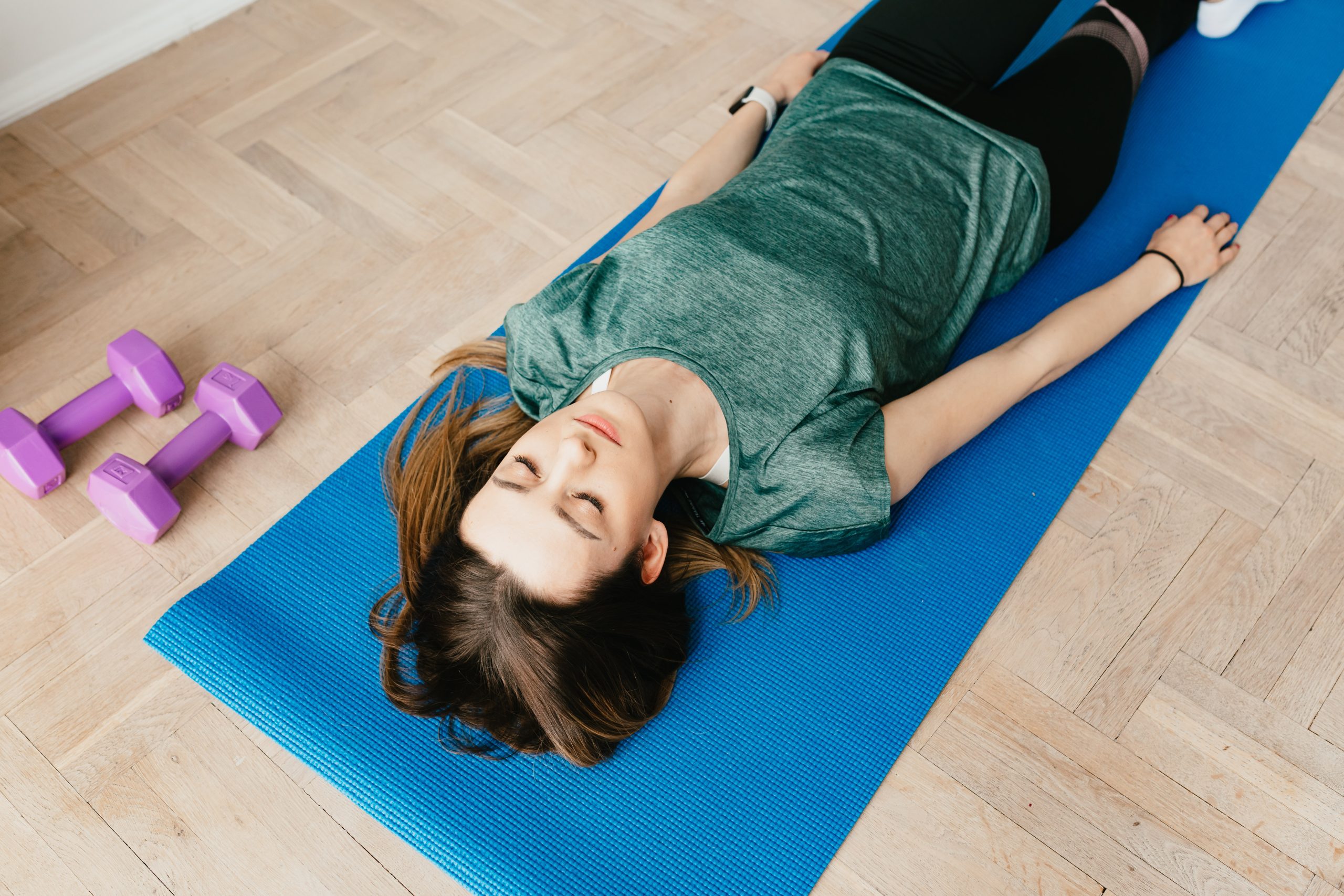 Some yoga practitioners regard the savasana as an exercise that helps you cool down after an intense workout. As WebMD rightly puts it, savasana is a position of rest and relaxation. Unlike other yoga poses, the savasana may not work specific muscles since it’s not a strength training exercise. According to MedicalNewsToday, you begin the pose by lying flat on your back with your arms on the floor with palms facing upward — a few inches away from the rest of your body. Your knees should be open, and your toes slightly pointed out. Be sure to remain relaxed through the pose with the main focus on your breathing, which should be slow and deep. Before sitting up in your original position, roll on your side, maintaining your deep breathing.

Since exercise puts the body into a flight or flight state (which triggers the body to release adrenaline and cortisol) a post-workout stretch like savasana counteracts the stress responses after an intense routine (via Healthline). Allowing the body to wind down with savasana also creates a sense of calmness that helps reduce anxiety and stress. Furthermore, the stretch can also help you sleep better and help relieve back pain (via News Medical Life Sciences).