Report: American Employees Are Some of the Most Stressed Out in the World. Parents Say: Duh! 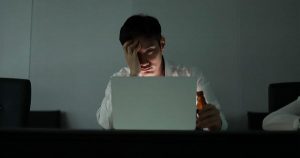 A new report confirms that Americans are among the most stressed-out workers in the world, which should come as no surprise to anyone who has a job in the United States.

According to Gallup’s 2021 State of the Global Workplace Report, American and Canadian workers had the highest regional percentage of daily stress. Fifty-seven percent said that they experienced work-related stress on a daily basis, compared to only 43 percent of people who reported daily stress globally.

Jim Harter, Gallup’s chief workplace scientist, told CNBC that he was not surprised by the results of the study, as American workers have been increasingly stressed and worried about work since 2009. This level of stress is likely exacerbated for a variety of reasons, including the fact that data shows that Americans are great at working long hours and terrible at taking vacations.

Meanwhile, 45% of people who responded to the survey, in general, said their life has been affected a great deal by COVID-19. People in the United States and Canada were the second-most affected by COVID-19, and 33% of respondents from that region said they lost money from work as a result of COVID. 38% of folks in the area also temporarily had to stop work (no surprise as child care centers shut and parents were effectively cut out of the workplace) and 48 percent of respondents said they experienced daily worry, alongside that major 57% stress report.

The whole report is fairly damning for North Americans, but that it is should be no surprise.

The confirmation of American workers existing in a nearly constant state of stress is unlikely to be much of a shock not just to people but to working parents raising kids in the United States, who continue to be given basically no assistance in balancing their jobs and taking care of tiny human beings. The United States remains one of the only wealthy nations on earth to not provide paid parental leave despite an overwhelming majority of Americans expressing their support for it in recent years.

Younger Americans were found to have more daily stress about work than older Americans, which could be tied to the growing wealth gap between millennials and older generations, thanks in large part to massive amounts of student debt and a concerning lack of affordable housing.

Basically, unless America starts providing people with the tools and resources to actually feel empowered to build wealth for themselves and their families, it is pretty much guaranteed that workers will only continue to feel more and more stressed with each passing year, especially parents, who may not be able to provide for their children to the extent that they would like to.