Stress affects more than the mind

As a single-mother, graduating college student, journalist and small business owner, I know that day-to-day stress takes a toll on the human mind. However, a few months ago, I learned the hard way that the effects of stress are not limited to the brain. 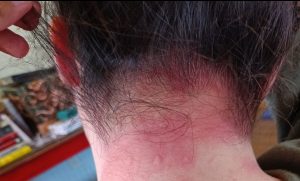 A few months ago, I hit my breaking point. The day began like any other. My alarm went off, I slowly removed myself from my bed so not wake up my son, grabbed my robe and sneaked out of the room. However, I noticed that my neck was hot and burning at the base. It was uncomfortable but I chose to ignore it.

The kitchen is my happy place and I began the morning ritual of counting the scoops of coffee and pouring them into the filter, and once that was done, I hit the “strong” button before walking to my home office located in the living room.  This has been my routine since 2013, beginning my mornings in a quiet house with the only loud noise coming from within, as I tick off my to-do list for the day.

Before I made it to opening my laptop to catch up on my homework for my last semester of college, my son’s nana knocked on the door. I welcomed her in, offered coffee and sat down in my favorite green chair. I could tell that she was unhappy. I had been receiving texts throughout the week about her unhappiness. I knew this was coming — just not before coffee.

Before she began, she motioned behind me, and I realized my son had woken up silently and had gotten dressed. She asked him to walk next door to go help his grandpa. I knew this was not going to be good. It never is when you send a child away — but she also knew that I do not burden my child with adult matters. Before I show her in a negative light, or make her the villain of this story, I would like to take note that she has a lot on her plate as I do. We have a common trait, even though she isn’t my mother, of shouldering a lot of responsibility. Not because we want to, but because we have to. I already knew what she was angry about, but I let her begin the speech.

She was mad that my dog, Mathieu, got out of the pet cage and killed the neighbor’s cat. I am aware that my dog turns wild when I let him run loose in the country. He also ran loose with grandpa’s dogs and they hunted rabbits and squirrels. I knew Mathieu killed the cat — there was no doubt in my mind. However, that was the breaking point for us both.

The speech got out of hand very quickly and I felt trapped — not just in the situation but in my body. And quite suddenly, I was extremely hot. The heat spread quickly from my neck throughout my body and I thought I was about to combust. I ran to the bathroom and I discover I was covered in a red, whelped-up rash — from my face to my toes.

It happened so fast, that in my panic, I grabbed my keys and drove from Kirbyville to Jasper to the urgent care without even changing my pajamas. By the time I arrived, I had to wait an hour and a half for the doctor to come back from lunch. My panic did not cease and my face had swollen so tight that my eyelids and ears looked as though they would split down the middle from the pressure.

When I was finally seen, the doctor thought I was having an allergic reaction — but to what, she did not know. She gave me a steroid shot and a prescription and said if it got worse to go to the hospital. I drove to Walmart to wait on my prescription, but to my horror, the rash got angrier than before and I felt like ripping my skin off — other shoppers steered clear of me like I was a leper. I left the prescription at the store, drove home to pick up my son and drove to the hospital in Jasper.

I was admitted at once and the doctor took one look at me and gave me Benadryl. They did not urine or blood test me — they just sent me home. I called my mother, thinking “She will know what to do.” and asked her to come help me. She had never seen anything like it either. I was literally trapped inside a burning hell. 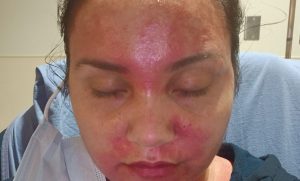 It took a week and a half for the rash to fade. However, the burning stayed under my skin and still makes appearances in random places every day. The weeks that followed, I had my blood and urine tested, nothing unusual was found. I had to give up drinking coffee, the most sacred part of my morning ritual, and replace it with white teas.

I took Benadryl every three hours and covered my body in calamine lotion until the rash disappeared — and I still take one pill every day to keep the rash at bay. My ears were swollen for so long that I was deaf in my left ear. The doctors at the Lamar University Speech and Hearing Department scheduled me twice, which was free of charge because I am a student, and they made sure my ear drum was not damaged.

They explained that the swelling went from outside to inward which caused the earwax to impact. The solution was to switch between swimmer’s ear drops and regular ear wax removal drops to remove the wax. I have hearing in both my ears now.

The doctor that read the lab reports finally diagnosed me with a stress rash. I was under so much duress, from graduating college to trying to make my bookstore successful again that my body had finally had enough.  The rash on my neck was the warning to get my stress under control, or it was going to get worse.

I researched the types of things that irritate a stress rash which range from foods high in histamines to working out and getting hot. My normally smooth skin now has a textured appearance and that makes me feel insecure that I could rash out at any moment.

To reduce stress, I listen to white noise while I concentrate on my deep breathing or when I go to bed — my go-to is thunder and rain.

This incident changed my life in a very inconvenient way, but I took this as a learning opportunity to finally listen to my body — and to just slow down.

I believe my need to be in control of everything and to make people happy all the time is physically impossible — and my stress was warning me that I could only handle so much and the best kind of control is self-control.

We all struggle with day-to-day stresses, but we need to take time to decompress — unless we end up in a mystery show about spontaneous combustion.

by Sierra Kondos, UP staff writer