Are you or a loved one at increased risk for Alzheimer’s, a fatal disease for which there is no cure?  More and more people complain of problems remembering familiar names, phone number, or where they put their glasses, keys, etc.  Loss of memory, especially for recent events, is quite common in the elderly, but surveys show that these same symptoms are increasingly being seen in middle-aged and younger individuals. Many are understandably concerned about whether they will go on to develop Alzheimer’s disease (AD). or have mild cognitive impairment (MCI) that does not significantly impair normal function and may not progress. Making a definitive diagnosis is difficult, since it requires demonstrating the presence of both amyloid plaque and neurofibrillary tangles of tau protein in the brain, which can only be done at autopsy.

As illustrated in the above PET scans, changes in brain glucose metabolism (shown in yellow and red) can be present in MCI, although they are more pronounced in AD as indicated by the larger amount of central, blue, brain tissue with diminished metabolic activity. This is of no value in predicting whether MCI will worsen but a new fluorescent dye that binds to amyloid plaque on PET scans may be able to provide this information. 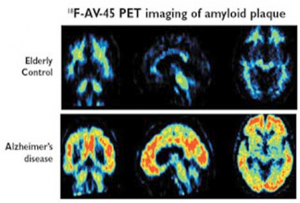 This is important, since if patients with MCI do not show amyloid plaque, they will not progress to AD. MCI is reversible in many individuals if its cause can be treated or eradicated. Some culprits include depression, insomnia, sleep apnea, hypothyroidism, B12 or folate deficiency, certain medications and brain tumors.

Stress is the major cause of MCI, particularly in those younger than 50 according to a national survey.  Stress is also an important contributor to Alzheimer’s based on animal studies an accumulation of tau protein tangles after 14 days of low grade chronic stress, as shown below.1

Electron micrograph illustrating an accumulation of insoluble phosphorylated tau protein aggregates in brain cells after exposing mice to only 14 days of repeated stress.

This effect was most notable in the hippocampus, which is responsible for the formation, organization and storage of memories. In AD, the hippocampus is usually the first region of the brain showing tau pathology and it suffers the most cell death and atrophy.  Hippocampal atrophy is also seen to a lesser degree in depressed and PTSD patients who complain of memory loss. They also have higher levels of cortisol, suggesting they have been subjected to increased chronic stress. Acute but brief periods of stress not only don’t produce debilitating tau protein accumulations in experimental animals, but actually appear to facilitate learning and memory. These differences may be due to effects on two key corticotropin-releasing factor receptors, suggesting a target for potential therapies. Beta-blocker drugs that block stress hormones significantly reduced or delayed the onset of Alzheimer’s, whereas other antihypertensive medications did not in the ongoing Honolulu Asia Aging Study.

Death of a spouse, the most stressful life change event, has been reported to be a risk factor for AD, and a study of 800 nuns, priests and brothers found that those who reported more stress due to anxiety and depression were twice as likely to develop Alzheimer’s as controls who did not perceive they were under increased stress. In addition, stress reduction with meditation and yoga have been shown to slow the progression of Alzheimer’s and other dementias.

Dr. Paul J. Rosch is current Chairman of the Board of The American Institute of Stress, Clinical Professor of Medicine and Psychiatry at New York Medical College, Honorary Vice President of the International Stress Management Association and has served as Chair of its U.S. branch. You can follow AIS on Twitter, watch AIS videos on You Tube, become a fan of AIS on Facebook and subscribe to one or both free AIS magazines to receive the latest stress information and research from around the globe directly to your inbox.