Nearly half of Canadians (48 percent) are more stressed to start 2022 than they were during the first lockdowns in 2020. 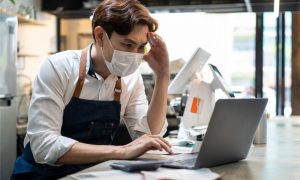 However, job insecurity (41 percent) is not among their top concerns, according to a survey released by licensed insolvency trustees Bromwich+Smith.

Overall, Canadians are worried about the following:

Sixty-eight per cent of Canadians plan to increase travel spending and 57 per cent say they would return to pre-pandemic spending levels on social activities, according to a previous Canadian Payroll Association (CPA) survey.

However, these worries are far more common among the younger generation compared with the older groups, finds the survey of 1,519 Canadians in January.

One in 10 Canadians with credit card debt say that they will need more than five years to pay it off, with another 35 per cent saying they will need between up to five years, according to a separate report from CPA.

Many would also be impacted by rising rents in Canadian cities (37 per cent), a reduction in hours/pay at work (29 per cent) and changes, reductions or repayments to government supports (28 per cent), finds Bromwich+Smith.

Canadians are overwhelmed and certainly fatigued by the numerous economic and life/health challenges being thrown their way,” says Laurie Campbell, director of client financial wellness at Bromwich + Smith. “I can’t imagine a bigger need for financial relief than living through this global event

Nearly one in three (32 percent) of organizations are accelerating their strategy to improve the financial wellbeing of employees ─ but 25 percent are decelerating that strategy, according to a previous survey by Willis Towers Watson.

Visit The American Institute of Stress