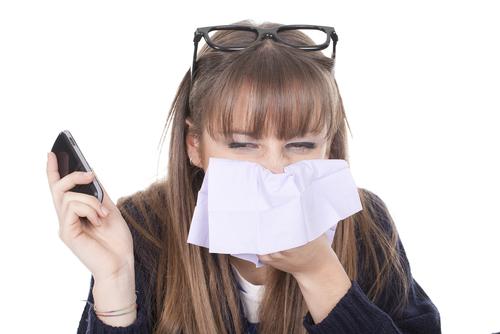 People who suffer from hay fever, asthma and eczema often note that their symptoms worsen when they are under stress. For example, domestic disputes and violence frequently trigger an asthma attack, and asthmatic children subjected to emotional stress tend to have more hospital admissions for asthma and require higher doses of steroids for airway control. In an experiment done decades ago, when a volunteers with hay fever were placed in a room filled with ragweed for an hour or so, they had no symptoms, but promptly came down with a full blown attack of itchy eyes and sneezing after being deliberately provoked. More recently, medical students with hay fever and/or asthma and a healthy control group were extensively evaluated during a calm period of study and then prior to an important final examination. During the stressful exam period, both groups showed a sharp increase in regulatory T cells, which control the activity of other immune system cells that tend to reduce inflammation. However, although IL-6 and other immune system components associated with inflammation were significantly elevated in the allergy sufferers, there was no change in the control group.

A new study now provides additional information on how stress can magnify allergic responses. Hay fever sufferers received a series of skin prick tests to measure their responses to allergens based on the size of the wheals that developed. On one day the subjects were given five minutes to prepare and deliver a speech to an important audience about why they were the best person for a particular job, and then had to solve difficult math questions in their heads under time pressure. On another day, they had less stressful assignments, such as reading a magazine. When researchers compared the size of hive-like reactions to skin tests before, during and after the challenging task, there was no change in size in volunteers who experienced little stress, compared to a 75% increase in those with moderate anxiety, and wheal were almost 200% larger in the severely stressed. The wheals also lasted longer in the high stress groups. Even skin tests performed the day after the speech stress test showed much larger wheals in the most anxious individuals, who still had increased IL-6 levels. This helps to explain why allergic reactions in the nose, chest and skin that seem to resolve within hours can suddenly resurface the following day.

Stress does not cause allergies, but appears to trigger allergic reactions by immediately releasing histamine and immune system activities that sustain annoying symptoms. Antihistamines can help to prevent and minimize allergic reactions but are not effective for spontaneous recurrences the following day, which often require steroids and symptomatic treatment like decongestants. In addition to adverse health effects, allergies also exact a significant financial toll. Researchers estimate that Americans pay $2.3 billion for allergy medications each year; $1.1 billion for doctor visits, and are responsible for the loss of approximately 3.5 million workdays.