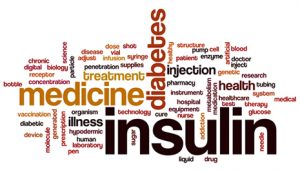 Teenage diabetic females seem to have particular problems in maintaining proper diabetic control.  One study suggests that the problem may be due to increased psychological stress which occurs at this period in life in comparison to male counterparts.  Some 50 adolescent diabetics were studied excluding those who had diabetes for less than one year, other interfering medical problems, or a history of psychological problems or unusually severe stress levels.  The subjects were evaluated in terms of their knowledge of diabetes, adherence to proper control techniques including medication and diet and standard psychological evaluation tests for depression and anxiety.  No significant sex differences were found in terms of self-care efforts with boys averaging 2.6 daily blood sugar tests compared to 2.8 for girls.  However, glycosylated hemoglobin levels which reflect average blood sugar levels of a three month period were significantly higher in females- 10.2% versus 8.7% for males.  While the averages of anxiety and depression ratings were within normal ranges for both males and females, the 16% who exhibited mild to moderate depression were all females as were the 10% of respondents who were in the moderate to high anxiety range.