Survey: Tweens under more stress going back to school 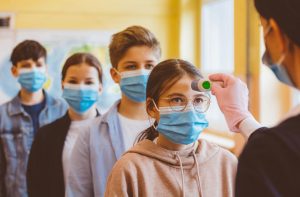 Going back to school is an exciting yet stressful time for children and teens each year – especially this year.

A recent Allstate Foundation survey found that when asked how they feel about heading back to school, the most common responses from teenagers were nervous, uncertain and stressed.

Young people are coming off a school year disrupted by a pandemic, a summer of canceled events and activities, and being distanced from many friends. The simultaneous events of the COVID-19 pandemic, divisive politics and social unrest all have added to the stress, the survey reports, with 73 percent of teens saying world events over the past six months have made them more worried about their future.

While there once was hope that the new school year would signal a return to normal, schools’ back-to-school plans look anything but normal.

The move to online or hybrid learning, or even attending in-person classes with masks and social distancing, is weighing on students, according to the survey. Many feel worried about keeping up with their classes with the changing formats or not being able to take classes that don’t translate well online, such as art or shop. Others are upset about missing out on sports and other activities that have been canceled or adjusted.

“From the start of school closures to the current 2020-21 school year, our students have expressed a wide variety of emotions from a number of variables and extremely complex issues compounded by the social unrest and political climate,” said Roslyn Breyfogle, school counselor at Bayview Elementary.

Additionally, she adds, student stress has increased due to changes in routine and possibly other factors such as a change in family jobs, the role of family members, economic stability, and adapting to balancing work and school expectations. Any change in routine, either positive or negative, can elicit an unexpected stress response.

“Typically, stress levels are reduced through a consistent and predictable routine,” Breyfogle said. However, she notes throughout this time, students have experienced disruption to their friendships, adult support systems, and extracurricular activities, which often provide an emotional and physical outlet for students.

“Think back to when you were a teenager… friends and ‘hanging out’ were a priority,” said Heather Boll, local mental health peer support specialist. “Now consider today’s teens. Many have been cooped up and isolated since March, missing out on sports, clubs and just spending time with their peers. It’s been a long six months with everyone at home, and parents are stressed out too.”

Mental health agencies are reporting more parent-child conflicts that require intervention, and there is genuine concern that the stress and uncertainty weighing on children could have lasting effects on the upcoming generation.

The manner in which sustained stress manifests itself varies but could include anxiety, depression, extreme changes in emotions or sleep patterns, sadness, anger, negative self-talk – even suicide. Centers for Disease Control data shows that in Minnesota suicide is the leading cause of death among 10 to 17-year-olds.

Boll, a former school teacher, now certified in mental health peer support, specializes in anxiety, depression, self-harm and suicide ideation. She is a suicide survivor herself, who has struggled with her own mental issues. Boll typically counsels with women but lately has been regularly working with teens in crisis, their parents too. Boll says she sees many struggling with social isolation in the pandemic, and through The Hive provides peer support, wellness specialists, and resources to help.

From the outside, The Hive at 29 East Main Street looks like a charming two-story home, but inside the building has been transformed to create spaces for working, counseling and connecting. It’s a spot for adults and teens. The Hive works in circles, or small gatherings, led by a peer specialist focused on a variety of topics.

Boll notes that for some teens, art is a better language to communicate with than speaking, so one Hive offering is the teen creative circle. The creative circle helps teens navigate challenges by providing a space to externalize their inner world through creative expression. In the circle, teens are encouraged to verbalize their creative process and reactions toward the finished product.

The Hive also provides other resources for teens and parents, including tips for parents on how to use a method called the “Stage 4 philosophy,” widely employed in the mental health community to help teens early, before their mental health threatens their safety and wellbeing. It outlines the risk factors, symptoms and warning signs of a mental health condition that Boll emphasizes “shouldn’t be ignored or brushed away in hopes that they go away.”

For parents, it can be hard to identify if their tween or teen is okay. How do you ask so they will answer honestly? How do you keep the conversation between you and your teen going? How do you know if your teen needs immediate help?

Sometimes it takes another eye or ear, counselors explain.

“Last spring, during distance learning, I had students who I would virtually meet with to talk about the struggles they were having,” said Dana Henn, a Waconia High School counselor. “Sometimes the students would reach out to me and sometimes I started the conversation. There were usually red flags that a student was struggling based on their grades and attendance. I plan to continue to meet with those students again once school starts and anticipate there will be other students who need support as well.”

School teachers and administrators understand it is vital to support students not only in their academics but also in their social-emotional needs, Breyfogle adds. At the local school district level, they apply a curriculum called Second Step Social-Emotional Learning (SEL) in early to middle school years. In addition, staff will be starting off the year with a greater emphasis on community building, emotional regulation, and empathy. Additionally, Breyfogle explains, students will get support through small group and individual counseling meetings as well as classroom lessons presented by the school counselor.

Finally, virtual webinars/courses and resources are available for faculty and families.

If you think your child is experiencing a higher level of stress and would like additional support or resources, reach out to your school counselor, The Hive at 952-567-9210 or hivemn.com, or Carver County Health and Human Services, (952) 361-1600.

And here are some additional resources for support and counseling: