The Biggest Lie You’ve Been Told About Stress Relief

The myth of over-breathing and how it hurts, not helps. 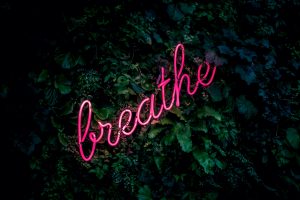 We’ve all heard those four words. In fact, they’re undoubtedly the most common advice we hear on how to calm down in moments of stress or anxiety.

Now, science tells us, deep breathing is the biggest lie we’ve been told about how to relieve stress in the long term. What we’ve been using as a method to help ourselves is actually leading to chronic hyperventilation, a pattern of over-breathing that exasperates stress and anxiety.

It seems to be common knowledge that quick, labored breathing (what we all know as hyperventilation, aka “too much breathing”) is a result of and a contributor to stress and anxiety. When the “fight-or-flight” response is activated, our sympathetic nervous system quickens and deepens our breathing, making us breathe in more air; in this way, stress causes hyperventilation.

However, hyperventilation also causes stress. If you were to make yourself breath quickly, deeply, and heavily right now, you would activate your body’s fight-or-flight response, creating feelings of anxiety and panic, an ironic feeling of shortness of breath, tingling sensations in your hands, and possibly even feelings of derealization. There is a feedback loop whereby stress activates hyperventilation, and hyperventilation activates the stress response.

The destructive feedback loop that is panic

So, the common advice told is to interrupt this feedback loop with slower, deeper breathing.

It is, in fact, good advice to slow down your breath, which reduces the volume of air that you take into your lungs (as opposed to quick, repetitive breaths) and takes you out of the hyperventilation cycle. It can also be helpful to take a deep breath in if it is done very slowly, with a longer exhale, and leads to higher levels of carbon dioxide in the lungs (rather than oxygen, contrary to proper belief), as is done in pranayama breathing.

However, when we take deep breaths to breathe in more air, we’re just using another form of hyperventilation. Using this advice, you stay stuck in a panic loop and, over the long term, end up teaching your body to over-breathe or hyperventilate, leading the body to stay chronically in a state of fight or flight.

You’ve probably never thought you could really breathe too much, but according to 24 published studies, over-breathing is one of the epidemics of our age. In 1929, the average person breathed 4.9 liters of air per minute. This number has been increasing rapidly with the rises in stress, processed foods, unhealthy diets, and unhealthy breathing patterns; today, that number is at a staggering 12 liters of air per minute, almost three times the amount we breathed just 93 years ago.

Such over-breathing is keeping the average person today stuck in a fight-or-flight feedback loop, creating chronic stress and anxiety.

Konstantin Buteyko was a Russian physician who made an interesting observation. While working with people with cardiovascular disease, hypertension, asthma, and other conditions, he noticed that those who were unwell demonstrated quick, heavy, deep, labored breathing, often from the chest. He developed a method of retraining that focused on breathing less (i.e., breathing less air and slower), breathing through the mouth, and breathing with the diaphragm rather than the chest. He found remarkable results in improving many of his patients’ symptoms simply from changing the way they breathed. Given the well-established link between stress and physical health, it’s no surprise that Buteyko was able to improve many of his patients’ physical health by targeting their stress response through the breath.

The foundation of the Buteyko Method of breathing is reduced breathing, in which, slowly, your body is taught to breathe less. This resets the respiratory center of the brain to become used to breathing less air, reversing the destructive over-breathing habit that is feeding our modern stress and anxiety. The result is much less stress and anxiety and a feeling of peace that is felt deeply in the body.

Tasha Seiter, MS, owns a therapy private practice providing online therapy to couples, individuals, and families throughout the state of Colorado. Her research investigates topics related to couple relationships, the benefits of mindfulness, and stress physiology.