The harmful effects of stress during pregnancy can last a lifetime 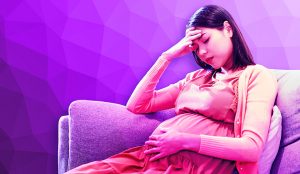 Mice exposed to stress in the womb and soon after birth can expect a lifetime of immune system deficiencies that hinder the ability to ward off infections and cancer, Yale University researchers report March 5 in the journal Cell.

In a new study, they tracked a lifetime of physiological changes experienced by mice given a liquid solution containing the stress hormone glucocorticoid while in the womb or soon after birth. Glucocorticoids are naturally occurring hormones that reduce inflammation and are instrumental in helping infants and adults alike adapt quickly to environmental dangers, such as famine or violence. Physicians use them to treat asthma and autoimmune diseases caused by overactive immune systems, for example.

But, the researchers found, early-life exposure to the stress hormone can permanently alter many immune system responses, decreasing the body’s ability to ward off bacterial infections and fight tumors.

In all cultures, there are efforts to shelter women from stress during pregnancy. The effects of early life stress don’t just go away. – Ruslan Medzhitov

“Mice for rest of their lives are rewired and reprogrammed in ways fundamentally different from those not exposed to glucocorticoids,” said Yale immunobiologist Ruslan Medzhitov, senior author of the study and Howard Hughes Medical Institute investigator.

Medzhitov and first author Jun Young Hun, also of Yale, cataloged a host of physiological changes that occurred in mice given glucocorticoids and that had serious consequences for the rest of their lives. As adults, for instance, the exposed mice were more susceptible to bacterial infections and tumors than mice without exposure. One specific physiological change was decreased activity in a key T cell that responds to pathogens and other threats to the host.

The study helps explain why individuals vary so widely in their ability to ward off infections, the authors said. It also provides an explanation for a social phenomenon found throughout human history: an emphasis on shielding women from stress during pregnancy.

“In all cultures, there are efforts to shelter women from stress during pregnancy,” he said. “The effects of early life stress don’t just go away.”

As more is learned about molecular changes caused by early exposure to stress, the more likely it is that medical science will find a way to minimize its damage, said the authors.

“We aren’t there yet,” Medzhitov said.