The Stress of Causing Stress

In the opening scene of this movie, the camera follows our hero. He is a handsome, well-dressed, young black man, who is driving a nice car alone in an inner city at night. He suddenly notices that he is being followed. His mind goes into alert mode as he constantly glances backward. When he passes under a streetlight, the illumination allows him to see that the vehicle behind him is a police cruiser. His mind now races to think of what could possibly be wrong with the car he is driving or what he might have done wrong while driving it. His quick conclusion is nothing and nothing. He is in a perfectly performing vehicle that he is driving in a perfectly legal manner. So, it must be him. But he hasn’t done anything wrong. So, he must look like someone else. He must resemble some other young black man who is suspected of doing something criminal. Or maybe he is just “driving while black.” It is hard to tell in his city.

Then the flashing red and blue lights come on. He looks in the rear-view mirror, just as two hard white lights come from the cruiser’s light bar and nearly blind him. Our hero instinctively moves his head quickly down and to the left to remove his eyes from the harsh light and then realizes that this movement will probably be understood to be furtive and suspicious. Now frightened, he tries to remember all the things his parents told him to do when (not if) he is pulled over.

Slow down and signal a right turn to alert the law enforcement official that you have seen and understood their overhead lights. Move the car to the right and find a safe place to stop. If possible, make it a safe place large enough for both vehicles. Come to a complete stop. Shift the car’s transmission into park. Take your foot off the brake petal. Roll down the driver’s window. Turn off the engine. Place your hands on the steering wheel at the 10 o’clock and 2 o’clock positions and wait.

Our brave young man follows this sequence of tasks calmly and purposefully, then looks into his side view mirror. The spotlight on the driver’s side of the police cruiser has been lit and turned to point directly into his side view mirror. He squints but keeps looking so he can still see what’s coming. The cruiser door opens and stays open for a long moment, then closes. There in the darkness, with his face obscured, is a middle aged, overweight, white cop. The cop stops by the rear of the car. He has a flashlight in his left-hand, shining it into the back seat. His right-hand rests on the handle of his holstered handgun. This could turn ugly fast.

The actors in this scene are nearly perfect stereotypes. The time and place could be almost any city in America at almost any time in living memory. The movie could be a high budget, emotional drama with big name stars, or a low budget video made to be used as a training scenario in driver’s education or in a police academy. Yet, it was all very real, and I was the cop. 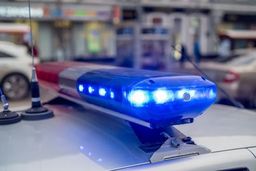 It was a slow evening. I was on routine vehicle patrol, when I spotted a car exiting a well illuminated parking lot without its headlights on. This is typically just a check and a warning. I pulled in behind the subject vehicle and followed to see if the driver would realize the situation and click on his lights. That didn’t happen and I started into my standard traffic stop procedure. I advised my dispatcher of my location and the vehicle description, including its plate number. The car was not stolen, so I was good to make the stop alone. I moved in close and turned on my overhead lights. The car signaled and pulled over. I had almost never seen anyone signal before stopping. I gave my dispatcher the stop location and received information on the vehicle’s registered owner, who was a 47-year-old female with no warrants. I approached and noticed that the car wasn’t running.

The driver, who was clearly not the registered owner, had his hands where I could see them and wasn’t moving. I started with my standard opening. “Good evening, sir. I’m Officer McMurtry and I stopped you tonight because your vehicle is not showing working headlights. And may I see your driver’s license.” I then paused and waited for the driver of the vehicle to speak. The young black man didn’t look scared; just under stress. He took a moment to think through what I had said. Finally, he called me ‘Sir’ and asked if he had my permission to get his license from his wallet and turn his headlights on. I was impressed by his politeness and said he could do both. 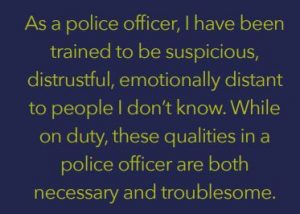 His license was valid, and his headlights worked. We were done–except that I felt the urge to say something. He was a teenager driving his mother’s car. He had behaved perfectly. I stated, “Sir, this will be just a warning tonight and you are free to go. But, may I ask you a question?” He said I could. “Is this your first traffic stop?” He said it was. I told him that he had done well, and he should thank whoever had taught him how to behave during a traffic stop. Then I asked. “How did I do?” After a surprised pause, the driver looked into my face for the first time and said that I had done okay. I smiled. He smiled. I thanked him. He thanked me. I told him to drive safely and returned to my cruiser. He had signaled a left turn and pulled out before I buckled up.

I sat there for a moment and thought about the assumptions we all make about other people. As a police officer, I have been trained to be suspicious, distrustful, emotionally distant to people I don’t know. While on duty, these qualities in a police officer are both necessary and troublesome. They are important in keeping me from getting hurt by alerting me to possible dangers, but also may cause me to treat a perfectly innocent person as a dangerous criminal suspect. It is a delicate balance between safety and oppression that can be fraught with human error and missteps – and which can cause high levels of stress on both sides of even the most routine of traffic stops. Yet, if all parties involved recognize these stressors, understand their roles and play their parts well, everyone involved will almost always get to go home safely. This is always my first goal in any traffic stop. 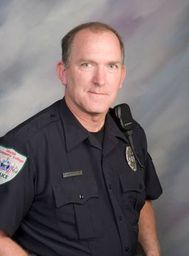 Tom McMurtry, DAIS, Police Officer (RET), CPT, U.S. Army, Special Forces (RET)  has spent most of his adult life serving others. He joined the US Army at the age of nineteen, volunteered for and completed Infantry, Airborne, and Special Forces training. After three years serving on a Special Forces HALO Team Tom became a Reservist. He remained in the Special Operations Reserve for twenty more years. He was recalled to active duty for the invasion of Iraq as a Psychological Operations Specialist, during which he was awarded the Bronze Star Medal. After his combat tour Tom returned home and entered the police academy at age 49. He served as a patrol officer for 15 years and received the Distinguished Action Award for his response on the night of the Dayton mass shooting in the Oregon District. Tom retired at the age of 65 but was recalled to part time duty by his department at the height of the pandemic to help cover for fellow officers who were sick. All of that aside, Tom will tell you that he takes greatest pride in his 45-year marriage to my wife, Holly, along with our five children and ten grandchildren.