Skip to content
Three for Three: A Preliminary Report of Scuba Diving as an Effective Treatment for PTSD – PTSD Progress Through Scuba DivingDanielle Boyd2022-08-23T21:23:40-05:00

Three for Three: A Preliminary Report of Scuba Diving as an Effective Treatment for PTSD – PTSD Progress Through Scuba Diving

My interest in scuba as a treatment for PTSD (post-traumatic stress disorder) began in 2011 when I read a magazine article about scuba diving as a means of improving sensation in paralyzed individuals by as much as 15 percent. Hidden deep within the study from Johns Hopkins University Hospital, I noticed that doctors suggested that they had discovered, quite by accident, improvements in PTSD symptoms by as much as 85 to 100 percent.1

I immediately focused on the fact that an 85 percent improvement as the minimum number was worthy of further investigation.

As a former Physical Training Corps Instructor, Diver2 and Sub Aqua Diving Supervisor (SADS)3, I was very excited about the possibility of improving or even eliminating PTSD sufferers of their symptoms. I then began to offer my location, as well as my dive equipment, boat, expertise and time, free of charge to as many wounded warrior organizations that I could find on the internet on both sides of the Atlantic in an effort to give back. This project is undertaken on Long Island in the Bahamas. 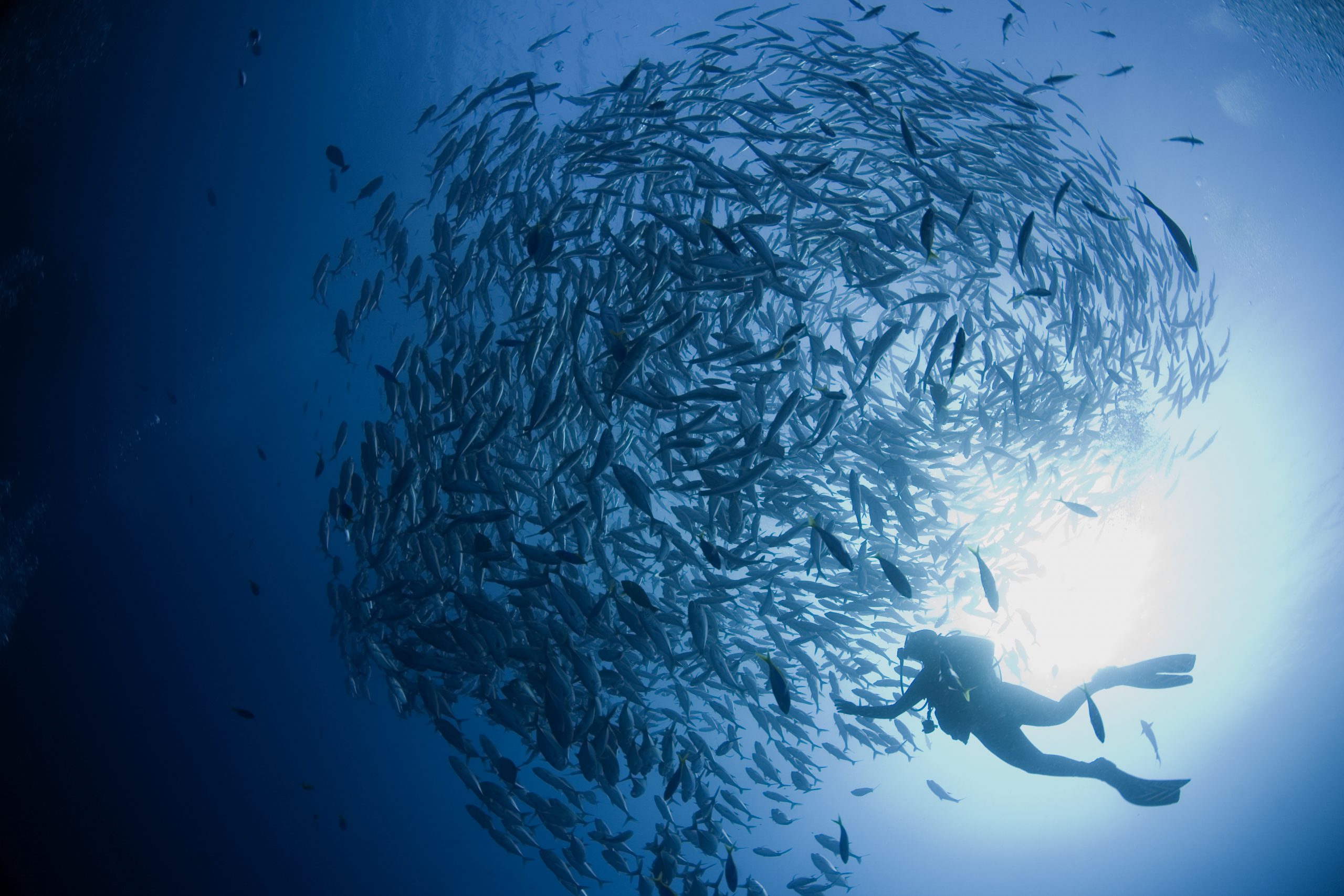 After making an effort to create some interest, encouraged all the way by my fellow ex-Army goalkeeper and colleague, Dave Smith, I finally decided to give up on all of the so-called caring organizations and go it alone. In my extreme frustration, I posted a rant on a British Warriors Facebook page with over 13,000 followers. This proved to be the breakthrough I needed. Jim, a PTSD sufferer who is ex-Black Watch, a leading Scottish Infantry Regiment, contacted me after seeing the post. He asked if he could come to the Bahamas to see whether scuba diving would help with his symptoms. I later discovered that his wife, Magi, was very skeptical about it all, but a holiday in the Bahamas sounded good to her!

His symptoms were such that he flailed around in bed at night as if in an electric chair. He had very dark thoughts during the day about hurting people (Yes, I know. all Black Watch Soldiers have those thoughts.). He would become extremely angry if he so much as spilled a drink, broke something or had a minor mishap of some sort. Luckily, he was able to cover all of the expenses incurred for their trip. While awaiting his arrival, I contacted as many experienced dive friends and medical types that I could, picking their brains for any useful information I could use for “Operation Black Watch!”

It was suggested to me that diving deeper was not necessarily better for improving symptoms, I kept an open mind in that regard. A program was planned, beginning with a shakedown dive to check for buoyancy, then progressing deeper for each dive to find the ‘sweet spot’ depth-wise for Jim. We embarked on dives between 60 and 130 feet (PADI industry standard for deepest depth), discovering that after the deeper excursions, he felt much better than after the shallower ones. He said that a couple of hours after one of the deep dives, he experienced an episode where he felt a black cloud physically leaving his brain. He discovered he no longer felt any anger or dark thoughts. Magi confirmed that he was sleeping like a baby, but stealing all the covers! (There is no pleasing some!) The diving continued for the week and both confirmed, upon his departure, that his symptoms were no longer present. He has now been symptom-free for 18 months.

Being encouraged by Jim’s success, another sufferer was sought and subsequently found. He was unable to pay his own way, so I reached out to all of my friends, family members and contacts, asking for advice, guidance or help with raising funds. A true friend offered his air miles to bring the sufferer out in economy class, even returning him home first class! This was a very generous gift indeed. Encouraged by this substantial donation, I funded the internal flight, accommodations and all incidental expenses myself. Hopefully this would enable a second PTSD candidate to contribute to the emerging track record that I was hoping to witness.

Trevor was selected due to the fact that he was already a diver, as was Jim. He was quite ill and had not worked for more than a year. He is ex-Royal Anglian, (a premier English Infantry Regiment), who transferred to the British Army Medical Corps. Both he and Jim had completed numerous combat tours. His diving program was planned to be very much the same as before. Trevor also commented that he felt much better after the deeper dives than the shallower ones. On three separate occasions, while Skyping with his family, they asked if he had been drinking due to his exuberant behavior and happy smiling face! He, of course, had not. He just felt so much happier, having left his PTSD symptoms behind. He has remained symptom-free for 11 months and is back at work!

The next hurdle in my mind was to find an individual with severe PTSD symptoms, who had never dived before; therefore, potentially giving the opportunity to more sufferers in the future. I started talking to a serving sergeant in the Royal Signals, (the British Army’s communications specialists), who had recently been placed voluntarily in a psychiatric facility. “Smooth room, no shoelaces” was his description of his stay there. He is a keen swimmer but had never tried scuba diving.

Money was raised via a Just Giving Page for his flights and accommodations. He was instructed to complete a try-dive in the UK to ensure that he was able to cope with diving. He also obtained a dive medical evaluation and permission to scuba dive from both his primary care physician and his psychiatrist. Marc then went one better and enrolled for a PADI Open Water course in the UK, less the ocean dives which I was required, by referral, to complete for him after his arrival. This qualification then enabled him to complete an Advanced Open Water course so that he could dive deeper than 100 feet. On first meeting Marc, it was clear that he was really suffering, as he had to be accompanied by his wife for the journey. Yet again, Marc felt much better after the deeper dives than the shallower ones. He said it felt like his brain was being flushed from the inside and the foggy feeling he had before was no longer there. He also claimed to leave symptom-free and it has now been 6 months since he completed our program.

In summary, it would appear that from discoveries on the ground (and of course, underwater), the following could possibly be happening in the brain before, during and after the therapeutic scuba dives. When a traumatic event is witnessed, cortisol is produced in the brain as a clever coping mechanism. Otherwise the person witnessing the event would have an immediate catastrophic “meltdown”. This substance is a sticky affair coating the “feel good” receptors in the brain. This situation tends to make the PTSD sufferer very angry, one of PTSD’s primary symptoms. The divers said this made them feel very negative all the time and prevented them from enjoying life fully. I have been reliably informed that serotonin (the body’s feel good chemical) and nitrogen breathed at elevated partial pressures, meaning. at depth in the water, could be forming a caustic cocktail and therefore, scrubbing clean or simply removing the cortisol from the brain. It would appear that this might then allow the feel-good receptors and the serotonin to do what they are supposed to do. Regardless of why this is working, so far, three PTSD sufferers have visited, dived, and then left claiming to be symptom free!

References
1. https://www.hopkinsmedicine.org/news/media/releases/scuba_diving_improves_function_of_body_mind_in_vets_with_spinal_cord_injury
2. British Army divers are professional divers trained to undertake reconnaissance, demolition, search and salvage tasks underwater.
3. Any sports diving conducted by the military as Adventure Training must be supervised by at least one Sub-Aqua Diving Supervisor (SADS) who has completed the SADS course, conducted at the Joint Services Sub-Aqua Diving Centre (JSSADC), Fort Bovisand, Plymouth in the United Kingdom. 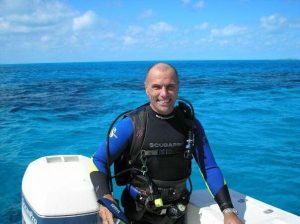 Kevin James, (the Diver, not the Comedian) is the creator of therapeutic PTSD scuba diving courses from his home on Long Island in the Bahamas. He was trained in the British Army as a Navy Sub Aqua Diving Supervisor and British Sub Aqua Club Advanced Instructor. Kevin has since gained the PADI Master Scuba Diving Trainer certification, as well as numerous technical diving qualifications.

His diving career has spanned 4 decades, first learning to dive in a Norwegian Fjord. After leaving the British Army, he supervised scuba diving at a small family- owned dive resort on Andros Island in the Bahamas, keeping the guests safe during their weekly signature dive to 185 feet (occasionally at night!). After leaving this lodge, he managed private islands for wealthy individuals and then semi-retired to Long Island. This is where he now provides PTSD diving in Deans Blue Hole, which is 663 feet deep (202 meters). His opinion concerning the help the PTSD sufferers gain from visiting him is based 50/50 on keeping the divers especially safe, most often at industry standard deepest depths and full on with military banter, whenever a mask and tank are not in use! The banter part of the time with Kevin, PTSD sufferers often insist, is said to be equally important to their symptom reduction or elimination using scuba diving. Kevin is hoping to add a clinical trial to his accomplishments, with a 100 percent track record of success thus far.