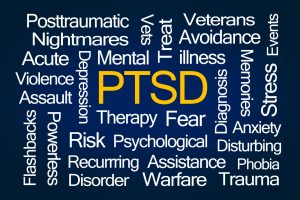 What Is Post-Traumatic Stress Disorder?

Post-traumatic stress disorder (PTSD) is a mental health condition that develops in response to experiencing or witnessing an extremely stressful event involving the threat of death or extreme bodily harm, such as a sexual assault, physical violence, and military combat. It can occur in the wake of a car crash; a fire, an earthquake, or other natural disasters; or any sudden, disruptive event.

It is characterized by vivid, intrusive memories of the precipitating event, hypervigilance, and reactivity to possible threats, nightmares that can destroy sleep, and mood disturbances. Those suffering from PTSD often report feeling anxious or scared even in the absence of danger. It may manifest primarily in anxiety-like symptoms, or in emotional numbness or dysphoria, or in anger and aggression, or some combination of those states. It is as if the normal stress response is locked into always-on overdrive. Those with PTSD often have difficulty functioning in everyday life, and symptoms persist for more than a month.

Although the disorder has likely existed since the dawn of human experience, it was originally thought to affect only soldiers; during World War I it was known as “shell shock.” PTSD was officially recognized as a mental health disorder in 1980. In the United States, about 3.5 percent of adults have the disorder. About half of them recover within three months. For some, the condition becomes chronic.

Treatment usually centers around talk therapy, but new forms of treatment on the near horizon combine talk therapy and medication in a novel—and very promising—ways for the 50 percent of sufferers whose symptoms are not relieved by existing approaches. Studies suggest that it may even be possible to prevent PTSD from occurring, especially in high-risk situations.

Some studies estimate that as much as half of the population will experience a traumatic event at some point in their lives. Of those, a small number will develop post-traumatic stress disorder. Even among veterans of combat, who have often been exposed to a barrage of life-threatening situations, rates of the disorder range from 10 to 30 percent, studies show.

Does PTSD only affect people who’ve been involved, or can it affect you if you’ve heard about an event?

PTSD is the result of a significant mental or emotional stressor.
This can be something directly experienced (heard, seen or felt) or indirectly experienced (told, read or viewed). Simply knowing about a significant trauma, like the violent death of a loved one, is sufficient to create the shock-like condition of PTSD.
First responders, including paramedics and police, experience PTSD from witnessing or reviewing the details of horrific cases.
Essentially PTSD results when the mind is unable to cope with the trauma it’s subjected to, whether that’s through direct or indirect means.

Are there any common misconceptions about PTSD?

One of the most difficult misconceptions about PTSD for society to overcome is that individuals experiencing PTSD are simply mentally weak.
It is not uncommon for people experiencing PTSD to encounter friends and family asking them, “What are you still afraid of? What happened has happened, get on with your life!”
This is a very difficult myth for the mental health and PTSD advocacy community to combat. Unfortunately, mental health issues, in particular PTSD, are plagued by significant societal stigma.

Does it ever go away or can it only be managed and reduced?

The severity of PTSD symptoms and their impact depends on the trauma and the individual.
Less severe PTSD can sometimes self-resolve after the first few weeks. However, for the majority of individuals, the mind simply cannot process the experience and symptoms persist without improvement.
Medications can help some individuals cope better with day-to-day triggers. Individuals can also learn to reduce symptoms like hypersensitivity and re-experiencing, but the trauma cannot be undone.

What triggers it or makes it worse?

With PTSD the mind is hypersensitive to anything connected to the original experience.
Familiar sights, sounds, smells, sensations, dates, words, songs, voices, people or places can trigger a re-experiencing of the trauma. Internal experiences, such as emotions, can also lead to flashbacks or a physical stress response.
The mind is trying to protect the individual from repeating the traumatic event, so the body is kept in a “fight or flight” response, where it is hyper-vigilant to trauma-related triggers.
Something innocent like the smell of freshly cut grass could be a huge trigger for somebody who experienced trauma in the presence of that smell.
Exposure to the news, internet and mainstream media’s typically negative coverage of world events is also triggering, increasing hypersensitivity and perceived threat.

What are some different ways of managing it?

There are some emerging therapies that help individuals reduce symptoms, sensitivity and emotional overwhelm associated with the experience.
There are two general pathways to managing PTSD: complementary medicine – including psychotherapy – and traditional prescription medications.
Eye movement desensitization and reprocessing (EMDR) is a form of psychotherapy using a combination of event recall and rapid eye movements to break the patterns of emotional response and recall.
Cognitive-behavioral therapy (CBT) helps individuals detach from feelings of guilt associated with the experience.
Reducing negative emotions, like blame, helps the mind let go and process the experience.
There is a significant amount of data supporting meditation as a treatment approach for patients with PTSD.
Research regarding the impact of meditation in the brain points to changes in brain structure and function that could account for the reduction of PTSD symptoms.
Transcendental meditation, a form of silent mantra meditation, has been shown to reduce PTSD symptoms, acute stress, and depression.
Prescription medications can alleviate overwhelming emotions. Speak to your doctor about whether they may be right for you.

An AIS Certified Product, Alpha-Stim, supplied this survey showing that the device offers better outcomes than treating PTSD with drugs– and with no side effects.  To purchase an Alpha-Stim, you must first receive a prescription from your physician.
For more info, visit www.alpha-stim.com.

Effectiveness of Alpha-Stim Technology:
2011 Military Service Member and Veteran Survey
With A Comparison to Drug Surveys

Discussing Your Psychological Health With a Provider

If someone you know is experiencing PTSD, what is the best way to support them?

Accept the individual and their condition without judgment or criticism, and comfort and engage with them.
Anticipate triggers and avoid exposure to environments or people who trigger the trauma. Ask how to help, support or provide comfort and let them lead your interactions.
Commit to them and your relationship with them, building trust and safety. Create your own support network and ensure you look after your own needs.
Empathise – the emotional toll of trauma has a deep impact, and they may not be up to day-to-day tasks.
Grounding – taking slow, deep breaths and describing the environment reduces dissociation.
Participate in normal activities including exercise, hobbies, and social events.
Patience is needed to help the individual recover and process the experience gradually – it will take time.
Plan with them how they would like to be supported during a crisis and what help you can offer.
Reassure them and point out their capabilities, strengths, positive qualities and past successes.
Relax – make time for resting and downtime with relaxing and calming activities.
Resist telling them “It will all be okay”, or “It could be worse”, or other unhelpful clichés – it is what it is.
Remove yourself from the situation if you feel threatened and give them plenty of space.
Routines can reduce stress, especially when combined with a low-stress environment.
Safety – their nervous system is signaling “danger”, so do your best to help them feel safe and calm.
Seek guidance and professional support from organizations that work with those with PTSD.
Support – respect their boundaries while encouraging communication, contact, and connection with others.
Understand their behavior may seem irrational or volatile, but remember that it is triggered by the trauma, not you.
Watch for signs of anger or agitation and diffuse the situation before emotions erupt.

Dr Robert Carter III is a Lieutenant Colonel in the US Army and medical scientist specializing in trauma and injury-related research.
Dr Kirti Salwe Carter was an intensive-care physician before training in public health. She is a Fellow of the American Institute of Stress (FAIS) and has been facilitating wellness seminars for the past decade.
They are co-authors of The Morning Mind: Use Your Brain to Master Your Day and Supercharge Your Life.