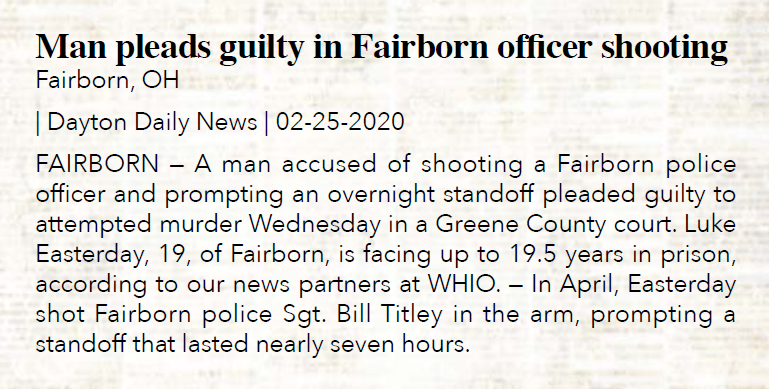 Your Honor,
In preparation for this hearing I was asked if I wanted to make a victim impact statement. At first, I wasn’t sure if I would but the more I thought about it the more convinced I became it would be necessary to have my opinion known.

Because you are also a public servant who, by definition, serves and gives of yourself, I know you already understand about what I am speaking. Because of this, I’d like to address my remarks to luke easterday.

luke easterday, we are both men and can make any choices we want – at any time. We have each made our own choices. I chose law enforcement. To serve and protect is the American law enforcement motto. All my brothers and sisters in this room live by that, every day, all day.

To serve is to give of yourself for someone else. To protect is to shield others from harm. As a police officer since 1994, I have proudly served and protected my community. I have given of myself, given my talents, given my intellect, given my time, given my family’s time, given my safety, all for the hope of a safe and happy community. The two assignments I’m most proud of are serving the schools and serving on the tactical team. I served in the Fairborn City Schools for more than a decade, protecting and serving the students and staff.

I served on the tactical team for more than 16 years, giving my time, often in the middle of the night or being pulled away from a family event, to protect others and save lives. Nearly my entire adult life has been spent giving of myself for others and protecting those in need. Serving and protecting were MY choice. luke easterday, by contrast, you have chosen to define your life by continuously TAKING, with 3 repetitive actions:
1. Those of a predator,
2. A coward,
3. And a criminal.

A Predator is defined as a person who exploits or preys on others. For years, even before you came to Ohio, you have preyed upon innocent people. Your juvenile court record (and now adult) is full of these actions.

The night you tried to kill me you preyed again; first on your fellow drug dealers and users, then upon me.

When you plead guilty to trying to kill me, you told the deputy I didn’t look “that messed up for being shot.” What did you expect to see? Me cowering and frail?

Speaking of cowardice, your actions have defined you as a coward, luke easterday. You threaten people, hurt people and steal from people, then you run, you run and hide. The night you tried to kill me was not my first encounter with you. Months earlier you had threatened a store clerk. You threatened his life because he banned you from his store. Why? because he was afraid of you and your actions. luke easterday, that night, after you threatened him you ran, as a coward, to your aunts’ home.

As soon as you did, you again hid, as a coward. You didn’t stay, you hid – you cowered, afraid to face someone who wasn’t afraid of you or who you couldn’t take in a fair fight. Once in custody, you told several officers you blacked out due to drugs and “didn’t remember” what happened. Again, the statements of a coward. A coward who takes no responsibility for his own actions and a predator who shows no remorse.

The actions of your whole life thus far have also defined you as a criminal, luke easterday. I’ve already said it, but it is worth repeating, just like you have repeated your actions time and again; you steal from people, threaten people, and hurt people to get what you want. After you plead guilty, you told the deputy you were not a criminal, but your lifelong choices say otherwise, luke easterday.

The night you tried to kill me, you didn’t steal my money and you surely didn’t scare me. What you did was far more important to me. You took from me full use of my elbow and hand. You took my position on my team, the one I had dreamt of being a part of for my full career, the one I worked so hard to get on, stay on, and improve. You shattered my family’s feeling of security, nearly taking me from them with your predatory, cowardly, and criminal act.

luke easterday, you will pay for what you have done to me, to my family and to this community. When you do get out, my brothers and sisters in law enforcement, yes, the same ones who protect and serve, will be waiting on you to try to prey on innocent people again.

luke easterday, I forgive you, yet I can assure you that if we meet again, but this time in a fair fight, the outcome for you will be vastly different. 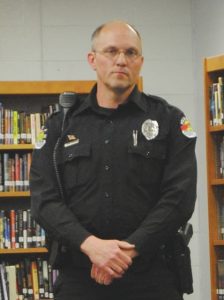 Bill has served with the Fairborn Police Department for the last 22 years. He holds a Master of Science in Education from the University of Akron and is an adjunct professor at the University of Findlay. Bill is also an OPOTA certified police instructor, including firearms and special tactics. Additionally, he is a co-author of the State of Ohio’s Solo Officer Response to Active Threat (SORAT) program.

He served as a member of Fairborn Police Department’s regional SWAT team for the last 16 years. With SWAT, Bill served in a variety of roles including sniper and team leader.

In addition to Bill’s law enforcement experience and teaching, he owns a private company that conducts threat assessments and active aggressor training for school and church administrators.

SGT Titley can be reached at [email protected]