War on Terror veterans to be honored at Air Force Museum 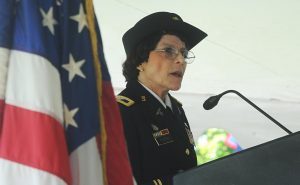 Dayton Area Ford Dealers intend to honor area veterans of the Global War on Terror with the Ford Oval of Honor next month at the National Museum of the U.S. Air Force.

Among those to be honored is a Dayton-area psychologist, Dr. Kathy Platoni. The four will be honored at the National Museum of the U.S. Air Force on Nov. 4, at the 4th Annual Ford Oval of Honor recognition to be conducted there, according to an announcement.

The keynote speaker at the event will be World War II Congressional Medal of Honor Recipient, Hershel “Woody” Williams, a 2015 Ford Oval recipient.

Williams fought in the Battle of Guadalcanal before landing on Iwo Jima where he destroyed several Japanese enemy machine-gun pillboxes with flamethrower and grenades, allowing his fellow Marines to successfully move ahead to eventually raise the American Flag on Mount Suribachi.

Williams has worked to erect a Gold Star Family monument in all 50 states to support those Gold Star families who have lost a loved one in the service of our country. Currently, 45 states now have such monuments, including Ohio, on the grounds of the Air Force Museum.

Ford dealers created the honor, and it’s described this way in a press release: “These are common individuals who walk and live among us who have demonstrated an uncommon commitment thru their sacrifice to defend the cause of freedom in service to our country. It is very important that recipients of the Ford Oval of Honor be recognized publicly, and this recognition be shared with family members — sons, daughters, and grandchildren so that they know of their loved one’s service to our country.”

The ceremony will begin at 6:30 p.m. Nov. 4 in the Center Stage area of the Air Force Museum where each recipient will receive a Ford Oval of Honor cherry shadowbox as part of their recognition.

Attendance will be limited at the event to meet the state of Ohio COVID-19 guidelines where honorees, family members, invitees, previous Ford Oval of Honor recipients and members of the media will attend.

This will be the 38th Ford Oval of Honor recognition event conducted since the first one held on the 10th anniversary of 9/11 in 2011 in Cincinnati.

Platoni well known in the Dayton area. She is a clinical psychologist and a retired U.S. Army colonel who continues to serve with the Military Reserves/State Defense Forces, as well as with Dayton SWAT and as editor of Combat Stress magazine.

“It came as quite a shock to me,” she said of her reaction to hearing of the award.

“It means the world to be acknowledged,” Platoni added. “I just feel that my accomplishments pale in comparison to some of those being honored.”

She served as commander of the 1972nd Medical Detachment (Combat Stress Control) at Guantanamo Bay, Cuba. Additionally, she served during times of conflict in Operation Iraqi Freedom and Operation Enduring Freedom in Afghanistan, within the Global War on Terror.

She is a survivor of the November 2009 Fort Hood massacre. She has become an activist for reconsideration of this shooting incident as “an act of terrorism so that the wounded and the families of the deceased are awarded long overdue benefits,” a press release said.

She has been honored many times for her work in psychology and for humanitarian efforts. These include the lifetime achievement award from her alma mater, Hobart and William Smith Colleges, the Legion of Merit by the Army as well as induction into the Ohio Veterans Hall of Fame.

Also to be honored at the museum ceremony are Sean C. Sink, who served in Southwest Asia, Operation Desert Storm and Operation Iraqi Freedom as part of the Global War on Terror; and Michael Logue, a U.S. Marine corporal whose Marine Corps Reserve infantry unit, Lima Co., was deployed to Western Iraq in Anwar Province, where some of the deadliest attacks in Iraq on American forces occurred, claiming the lives of 23 of his fellow Marines.

Also to be honored is James E. Groves III, chief warrant officer 3, U.S. Army. Groves served four tours of duty (two in Iraq and two in Afghanistan) and served almost 20 years in the U.S. Army during the War on Terror.

Groves was six months short of coming home and 18 months away from retirement when he was killed while piloting his helicopter in March 2013 in Afghanistan.

He is being honored posthumously with his parents James and Leslie Groves accepting the Ford Oval of Honor on his behalf. The Groves have been instrumental in support of the Dayton Gold Star Family Monument program.