I have a small confession; I have an alter ego. By day, I am your mild-mannered AIS Executive Director, but on occasion, I am also a biker. While I know that for some people a certain image initially comes to mind when I say this, my hope is to change some of the negative connotations associated with bikers. I have the honor of being a member of a motorcycle club named MFC. MFC stands for Military, Firefighter, and Cops Motorcycle Club, although we have some civilian patriots as members also.

The MFC is not an outlaw motorcycle club, so please forget the images of TV shows like Sons of Anarchy. We are intensely proud Americans who believe in the principles that this country was founded upon and the rule of law. MFC participates in hosting fundraising events for charity year-round, as well as charity rides that benefit or support all branches of the Armed Forces, parades, funeral escorts, and more.

Last December we had the privilege of volunteering at a very special event called Wreaths Across America. Wreaths Across America is a national movement for the remembrance of fallen U.S. troops. Wreath-laying ceremonies are coordinated at Arlington National Cemetery and at more than 3,100 other participating locations around the country. Wreaths Across America strives to remember our fallen heroes and honor their memories. It teaches our children about the sacrifices made by Veterans and their families to preserve our freedoms.

Wreaths Across America began in 1992 by Morrill Worcester and his business, Worcester Wreath Company of Harrington, Maine, when they discovered they had a surplus of wreaths toward the end of the holiday season. Years before, as a young boy, Worcester visited Arlington National Cemetery in our nation’s capital. The experience reminded him throughout his life of the sacrifices made by so many others for the good of this nation, including himself, to succeed and to flourish. Worcester made plans to lay the wreaths in honor of our Veterans at an older, less-visited section of Arlington National Cemetery. Volunteers stepped forward to help deliver and place these wreaths.

In 2007, the Wreaths Across America non-profit group was founded. Since then, the event has expanded to all 50 states to lay wreaths at Veterans’ cemeteries every December. 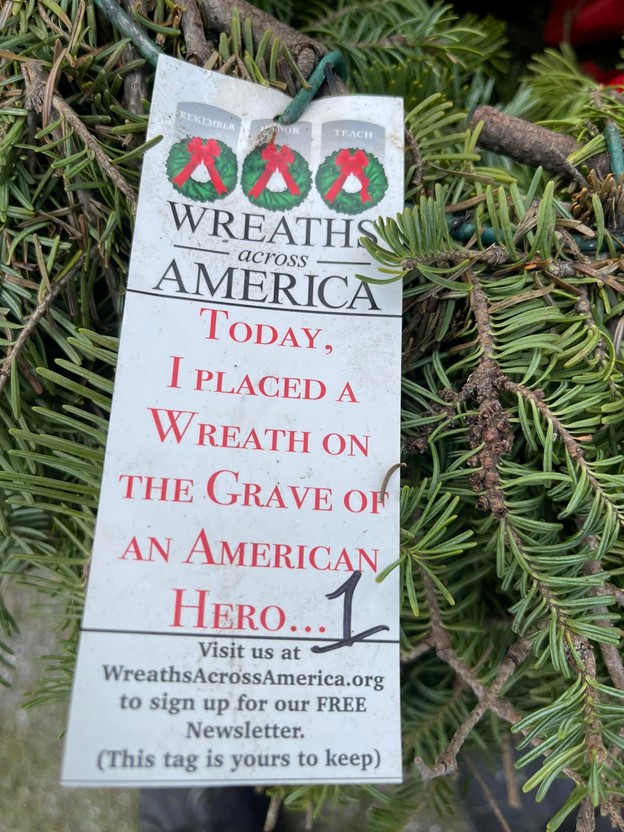 Each year a new theme is chosen to help volunteers and supporters focus their messaging and outreach in their own communities. The theme for 2021 Wreaths Across America was “Live Up to Their Legacy. “

Our event this year took place in Palm Beach, Florida. We had two groups from the MFC participate in our area. Both the Palm Beach and Miami chapters were there to help.

All the volunteers arrived early that morning before the cemetery opened. As we gathered for instructions and assignments, the reason that we were all there never left my mind. It is a humbling experience to stand there in view of thousands of gravesites and to know that all the people laid to rest there helped to make this country safe.

Fellow MFC member Marc (Simbo) Simmons and I were assigned the task of handing out more than 1,000 wreaths to other motorcycle clubs and groups participating on this day by our President Brady (Drift) Meyers. With the help of some younger Palm Beach County Deputies, we readied hundreds of boxes of wreaths for delivery. 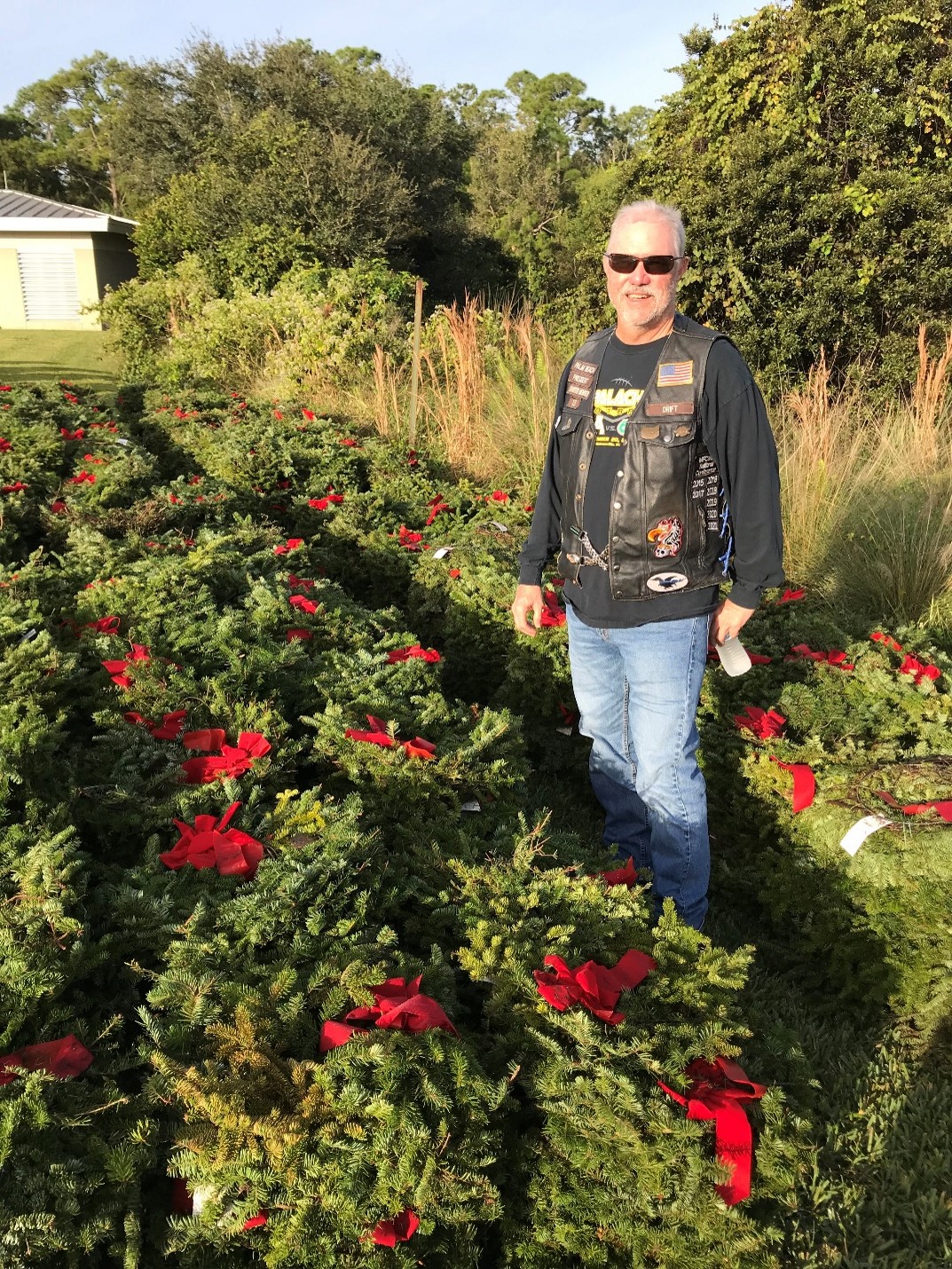 National President Brady (Drift) Myers Standing with some of the wreaths.

As we apprehensively waited for the groups to start to arrive, I thought of all the families that would also be there that day. My thoughts were also of my father-in-law, Leo, who served in the Army and was recently laid to rest at a national cemetery and would have a wreath laid by his headstone on that very day as well. 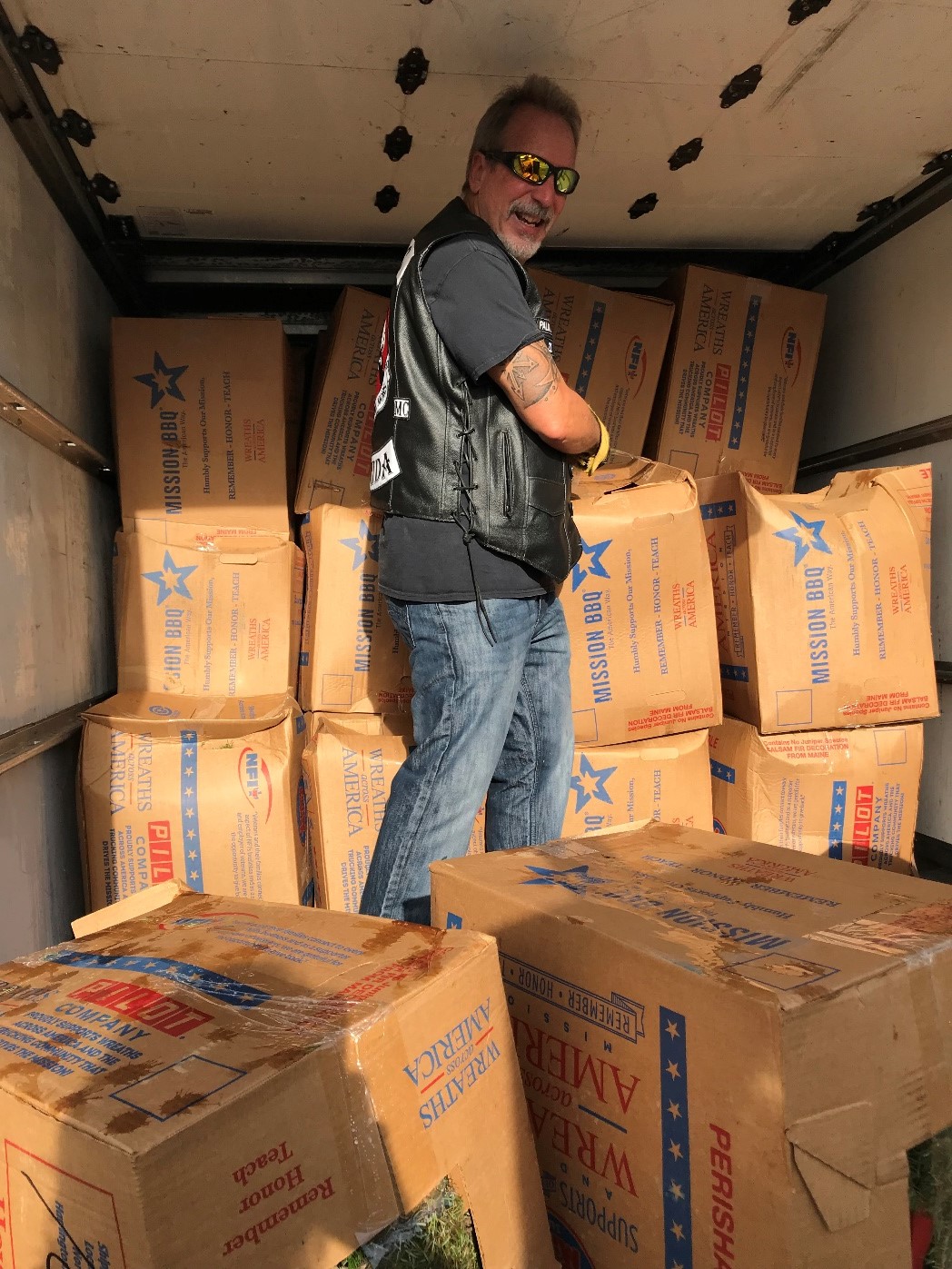 While Simbo and I carried out our assigned task, the rest of MFC worked at the main station, where hundreds of people came to get wreaths to lay at their family sites. With their help, everything went smoothly. 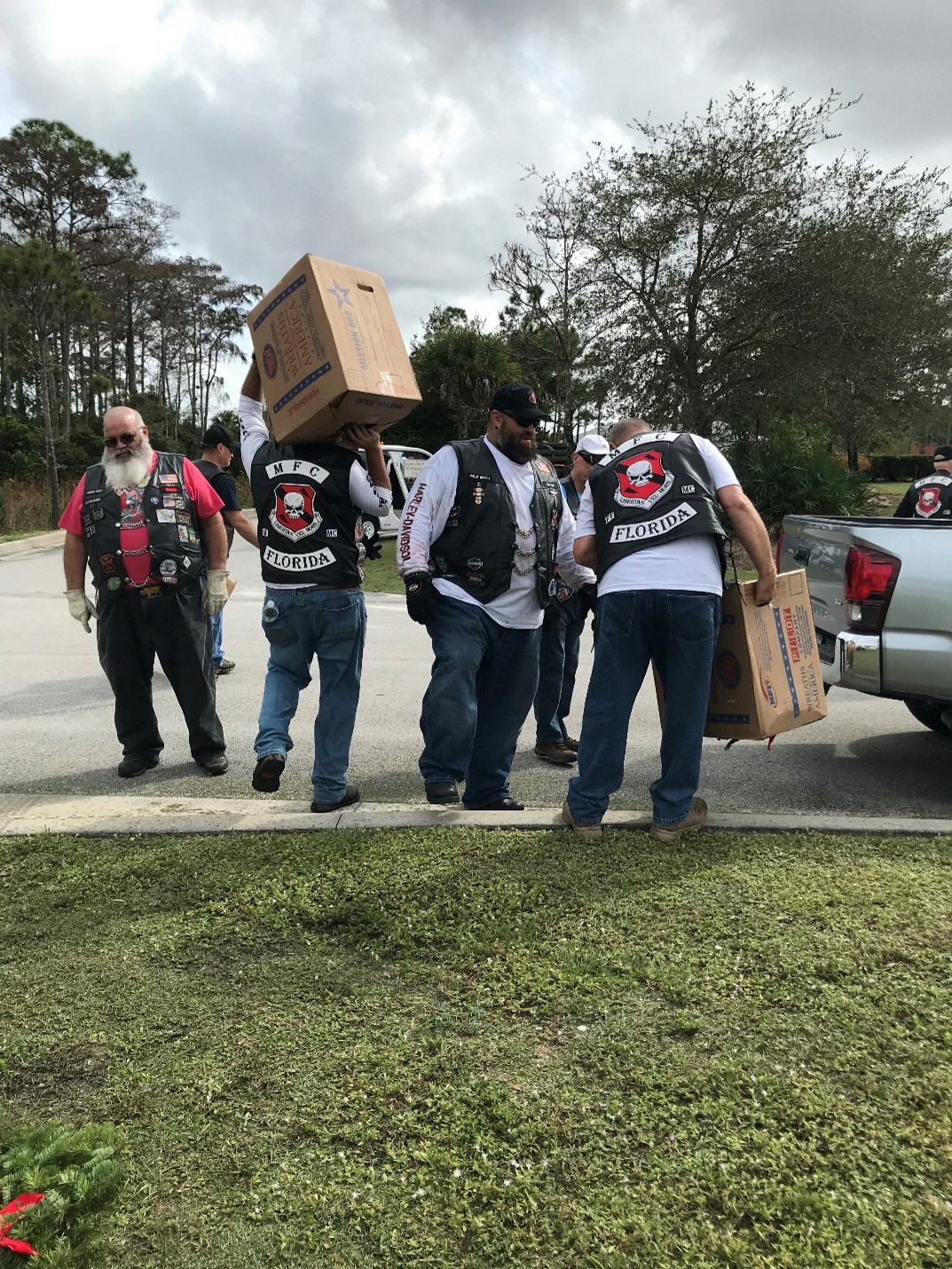 Members unloading boxes of wreaths at the cemetery

Once that was accomplished, it was now our turn. MFC then went about laying over 300 wreaths on gravesites. By the end of the day, we were exhausted, but satisfied that we had done a service to our community, hoping that we did “Live Up to Their Legacy.” 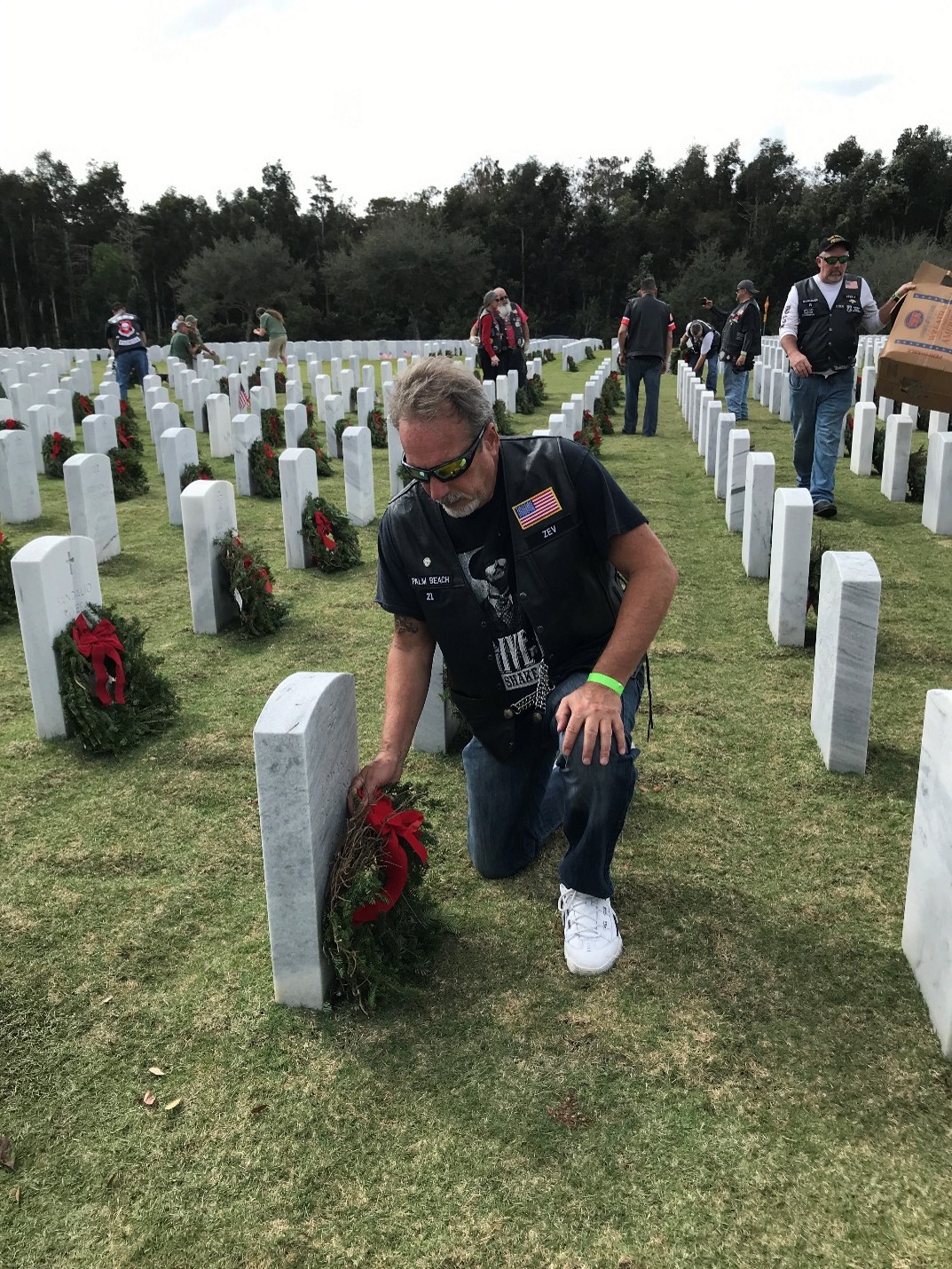 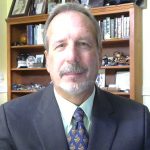 Will Heckman is the Executive Director of The American Institute of Stress and a nationally board-certified educator, with three decades of experience teaching. A former New York City police officer Mr. Heckman is a member of MENSA, and former President and founder of a national motorcycle organization. As a teacher, Mr. Heckman is an expert in bibliotherapy to help children and young men and women to overcome stress-related problems. In his role as host and creator of the American Institute of Stress podcast, he has interviewed many leaders in the stress and mental health fields. Will is also a member of the credentialing committee of The American Institute of Stress to approve new members. In addition, he hosts the AIS webinars and oversees its social media accounts. Will has published articles on the use of graphic novels and been featured on CBS News, in several newspapers, and on a national radio talk show. He has also been a presenter at technology conferences, a book reviewer for a national publication, and an award-winning photographer.