The spring issue of Combat Stress was published in late April and their esteemed readers were cautioned against the media’s campaign to sow panic and hysteria in response to the Coronavirus epidemic. It seemed an update was warranted. Since that publication, it now being late June, this writer and his wife have narrowly managed to squeeze into the 99 percent of Americans who will never never contract the Coronavirus illness. We wear masks in public. We wash our hands. We lift the afflicted in our prayers.

Troubling news emerged when some friends came for a weekend visit, however. My friend is a firefighter with more than 20 years’ experience in a rural Texas county, north-west of Abilene; population fewer than 5,000. He told me that a patient who was injured in a motor vehicle collision last month was taken to the regional medical center. The patient tragically succumbed to injuries sustained. The medical center listed his cause of death as Coronavirus. It was difficult to believe, but only at first. My friend let me know that emergency dispatch (police, fire, ambulance) and medical services are getting more and more difficult to fund for rural counties, leading many such agencies to close their doors. Reporting deaths as attributable to Coronavirus nets hospitals $15,000 (twice that if the patient is put on a ventilator). This is a result of the CARES Act, signed March 27, 2020, as a financial relief, in part, for public health organizations.1 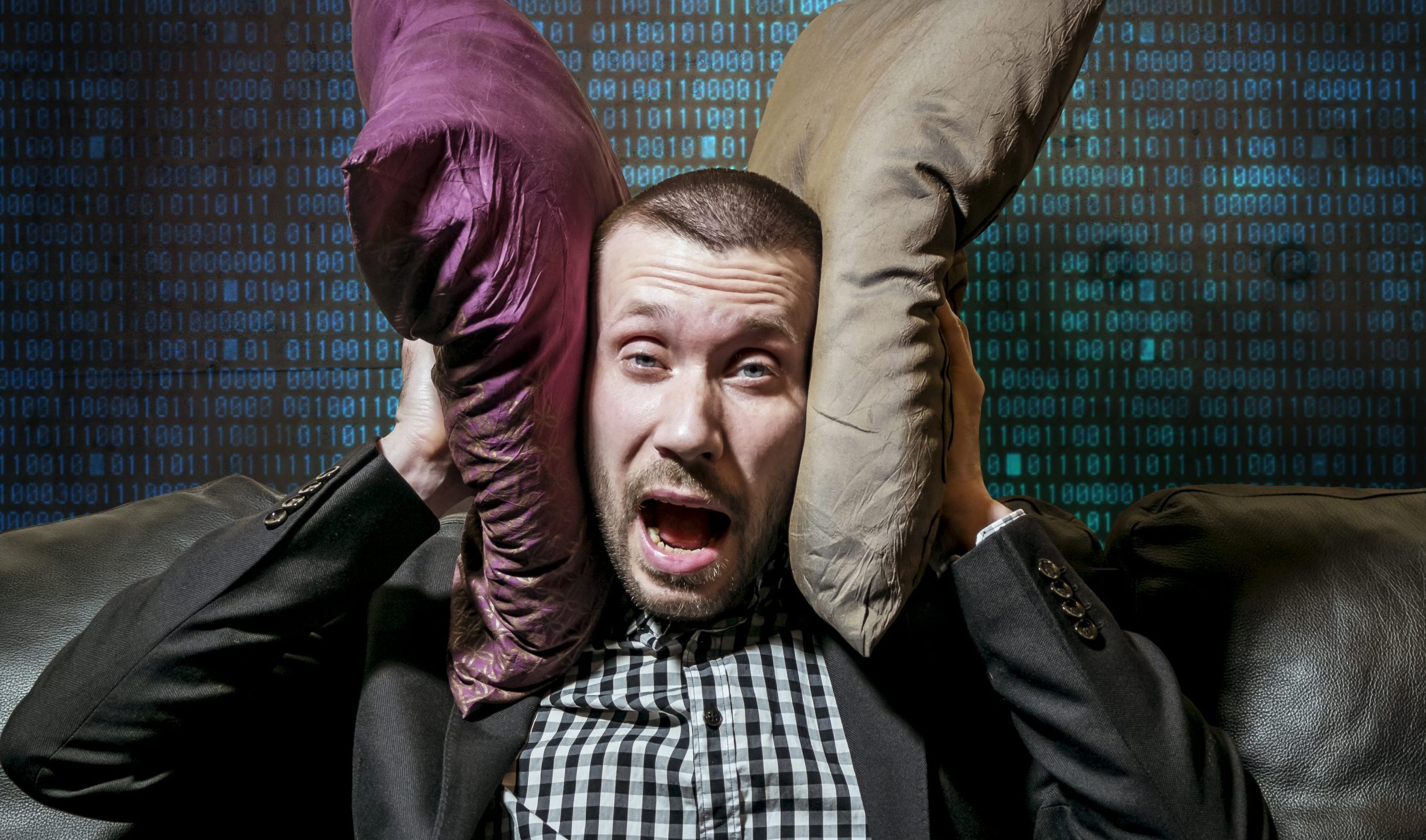 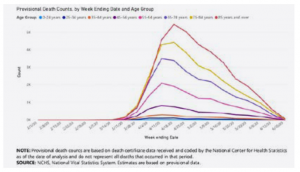 For a small medical center struggling to stay open to serve its catchment area, it seems plausible that a little pencil-whipping would become a matter of course, as the other option would only lead to the facility’s closure. However, how much of such number-fudging is occurring nation-wide? The truth may never be known, but the suspicion has led to a number of public jokes and this fraudulent practice has been reported elsewhere as well.2

The numbers from June’s end show an increase in the spread of the virus. The U.S. Centers for Disease Control show more than 2.5million cases of Coronavirus infection3, still under the one percent rate of infection for the 330 million American people who inhabit the United States.4 Predictably, that number rose in the past few weeks as more testing became possible; one who casts a bigger net will catch more fish. Of those who are infected, slightly more than 126,000 souls have met their unfortunate end. 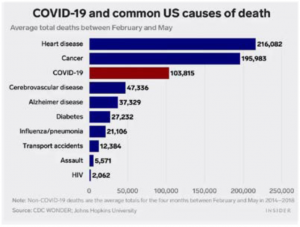 This yields a lethality rate of five percent. When charted by age, it is apparent that every ten years of age leads to an increased likelihood of a fatality from COVID-19, with favor going to those under 50 years in age. Even in the more mature population, however, a patient with COVID-19 infection still enjoys a 95 percent chance of reaching a full recovery.5

However, one must note the decreasing trend following the spike in mid-April. Coronavirus deaths in the U.S. are reaching an all-time low. Also, deaths resulting from heart disease and cancer still quadruple the numbers resulting from COVID-19.6

President Trump has stated that one death is too many7 and this writer fully supports that stance. The American public is beating this thing and will continue to see falling numbers, as long as complacency is expelled and excluded from our ranks. The numbers offer a way to look at this epidemic in a positive, reassuring light; however, no one in America will hear that from our mainstream media.

Left for speculation is when the media will go for a 24-hour period without mentioning Coronavirus. This writer has dour reason to believe that date will come on Wednesday, November 4, 2020, or soon thereafter, especially when considering that the top seven states generating the greatest numbers of viral cases (California, New York, New Jersey, Texas, Illinois, Florida, and Massachusetts) contain the top five states for electoral votes.

The murky glass of yellow journalism has shifted in recent weeks following theunjustified death of George Floyd in Minneapolis on May 25th. Considering the story took front-page headlines in the New York Times two days later,8 it leads one to wonder whether the riots spontaneously arose or were the result of more sinister forces at work. Black Lives Matter has taken a prominent place in global headlines. Perusing their Website (https://blacklivesmatter.com/) and attempting to donate financial support to what seems to be a noble cause, leads directly to a slush fund for Democratic party re-election, ActBlue.9 This is rather than providing direct support to those things that Matter to Black Lives. ActBlue, incidentally, was founded in 2004 by Harvard and M.I.T. alumni Benjamin Rahn and Matt DeBergalis; scientists who, at face value, seem several degrees of separation away from the nation’s inner-city, poor, African American communities that serve as the target demographic for Black Lives Matter.10, 11

Considering that ActBlue raised $41 million in a 24-hour period on Blackout Tuesday (June 2nd),13 doubling its previous one-day record for fundraising, would it be going too far to say that the rioting is good for business? One can only wonder as to the uptick in the business of news media as a result of such national discord.

The combination of left-leaning news, left-leaning academicians, and left-leaning politicians has spurred a disappointing trend. The Ferguson Effect is a term coined by Heather MacDonald, a conservative political commentator.14 It describes police officers who are increasingly reluctant to confront violent crime, as the fear of private videos – taken out of context – will lead to the end of an officer’s peacekeeping career. As a result, violent crime rises. Former Milwaukee County Sheriff David Clarke alludes to this in a video released by Prager University,15 also noting the effect of left-leaning personalities in politics, higher education, and the media joining forces to demonize police officers. The individual beat cop is then left without support. The video also shifts hot criticism to the Black Lives Matter movement for projecting police officers as evil and racist. A point of note is that the video was released in April of 2018, fairly predicting the surge of violence that would happen 24 months later.

Again, the statistics bear out Sheriff Clarke’s testimony. In comparing 2014 numbers, police use-of-force resulted in 990 deaths. In that same year, Johns Hopkins University released a study showing over 250,000 deaths resulting from medical error.16 However, no one in this country is rioting to call for de-funding of the medical industry. It is no far stretch of the imagination that rates of combat stress, its associated misbehaviors (e.g., anxiety, irritability, depression, substance abuse, attempted suicide, disruptive behavior, and mistrust of others), and post-traumatic stress for law enforcement officers will rise as they increasingly feel an erosion of institutional and financial support in the performance of their duties.

Look at the numbers, not the editorializing that the media moguls make public to support their stories and that politicians use to get re-elected. No, coronavirus is not the most lethal disease known to human history. No, police officers are not evil racists. In the aftermath of the 9/11 terrorist attacks in 2001, the nation was focused and unified, leading to a single goal of advancing U.S. interests that met with overwhelming success. Now the world has seen what our nation looks like when focused and divided, leading to complete economic stagnation as merchants watch their stores looted and burned, wondering if they will ever re-open while they are denied police protection.

With no small amount of skepticism, the American public has been subjected to dire predictions from the news media and their panels of experts about the direction in which the world is heading. It calls to mind a sign that came to my attention a few weeks ago and it will be printed in its entirety, thus:

The TRUTH is FEAR is killing us.
Pray. Trust God.

These words of wisdom were contained on a hand-written sign thumb-tacked to the wall of a barn standing on an Amish farm near Corpus Christi. It served as a reminder that the Ark was built and sailed by an amateur. Experts built and sailed the Titanic. 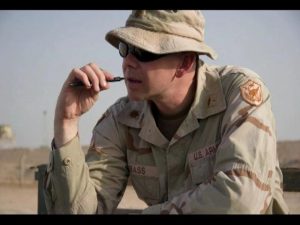 Charlie Bass, MS, PhD, MD (Lt. Col., U.S. Army, Retired), assisted and served in the aftermath of hurricanes, a tornado, a terrorist bombing, and the wars in Iraq and Afghanistan during 28 years with the U.S. Army. In 2014, he retired with his wife to Corpus Christi, Texas. He and his wife wish to remind readers that those who plan to vote in the November election must be registered by October 5 (or August 1 for military and those overseas voting absentee) – fvap.gov.