Across America, perhaps no one single group of people sacrifice more for their country than the armed service members – both active duty and retired veterans who at some point in their lives were willing to give up everything to protect and defend their nation.

At the same time, the suicide rate among American veterans has increased by 25 percent in the last decade, making them more in danger of mental health disorders than the population at large. With over 23 million veterans across the country, studies suggest that only half of returning service members who need treatment for their mental health actually seek care, and substance abuse continues to mark a growing concern among both enlisted and retired members of the armed forces.

To learn more about the immediate nature of this growing tragedy, we’re analyzing 2017 Behavioral Risk Factor Surveillance System (BRFSS) data from the Centers for Disease Control and Prevention (CDC). Our study takes a close look at the dangers of binge drinking among veterans, drunk driving incidents, and the emotional and physical trauma that could be leading to this substance misuse among some of America’s most dedicated heroes. Read on to learn more. 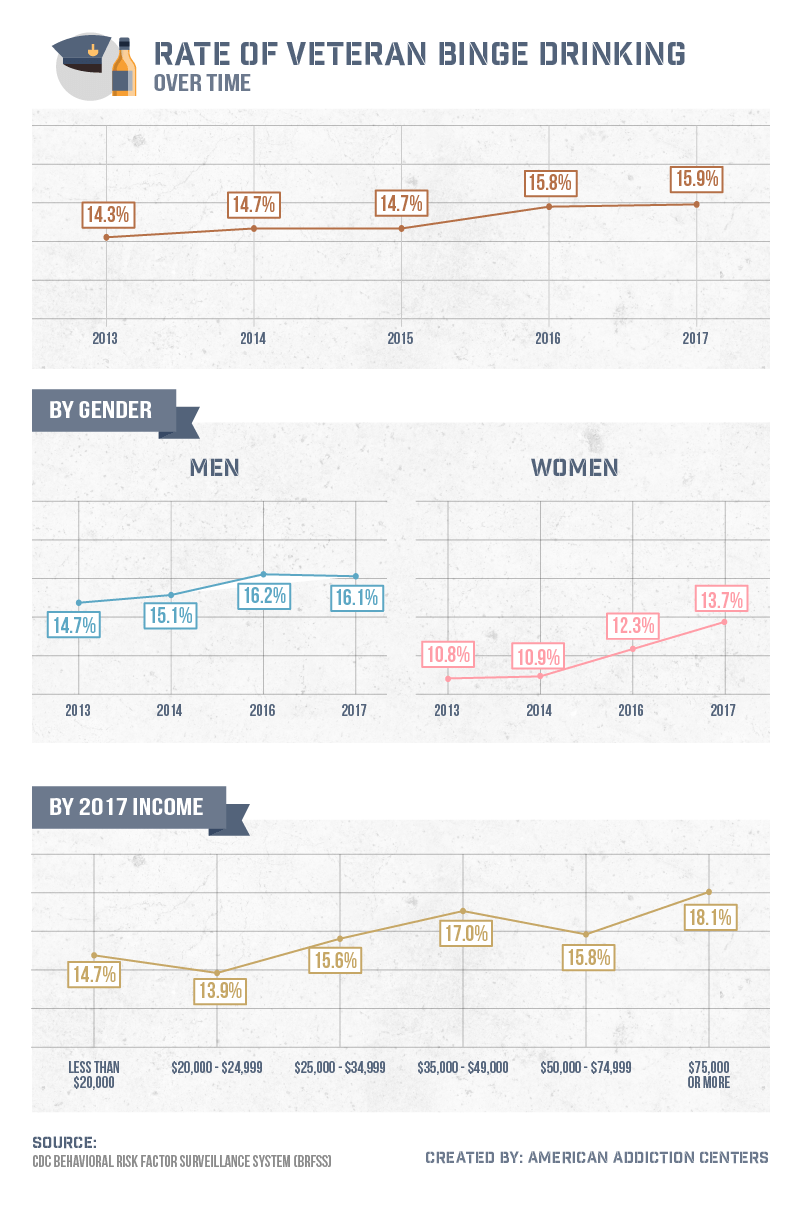 Since 2013, the number of veterans who’ve been diagnosed with episodes of binge drinking has increased from roughly 14 percent to nearly 16 percent. But as our analysis shows, binge drinking among veterans may affect certain subsets of service members far more than others.

Typically defined as consuming more than four drinks within a two-hour period for women and five drinks for men, binge drinking can lead to severe mental and physical health concerns. Roughly half of all alcohol-related deaths in America are related to extreme consumption, and in addition to alcohol poisoning and rapid cognitive decline, even just a single night of heavy drinking may cause lasting damaging effects on parts of the body, including the heart, liver, lungs, and brain. 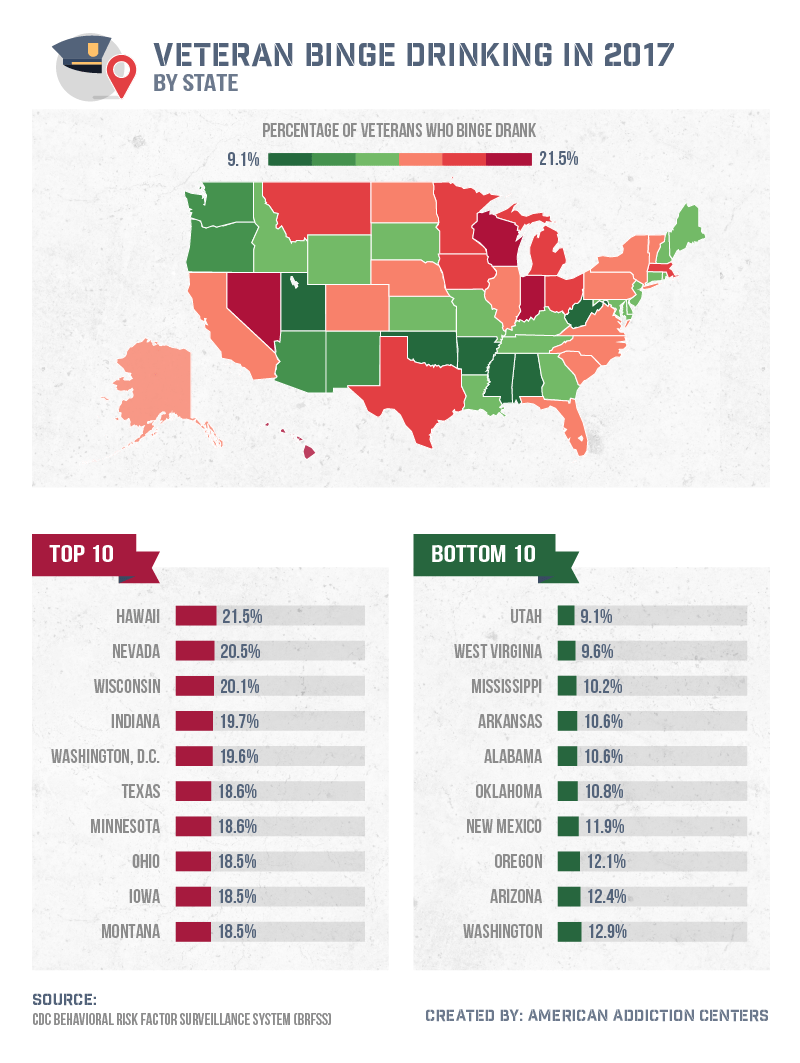 Overwhelmingly, research suggests the biggest factor leading to substance abuse and dangerous drinking habits among veterans is a post-traumatic stress disorder. Service members who exhibit PTSD symptoms are more likely to be linked with drinking problems overall, including between 60 and 80 percent of Vietnam War veterans specifically who’ve been diagnosed with alcohol abuse disorders and have a higher occurrence of binge drinking. Sadly, the same studies suggest alcohol consumption is more likely to exacerbate the conditions of PTSD rather than help abate them.

Across the country, binge drinking among American veterans was highest in states including Hawaii (21.5 percent), Nevada (20.5 percent), and Wisconsin (20.1 percent). In 2017, Hawaii received a $3 million federal grant to help combat substance abuse and mental health disorders across the various islands that make up the state with a combination of both Western treatment plans and their own cultural influence to help humanize the recovery process.

In contrast, it was states like Utah (9.1 percent), West Virginia (9.6 percent), and Mississippi (10.2 percent) that had the lowest reported occurrences of binge drinking among veterans. While veterans may be at lower risk in Utah, the statewide approach to drinking and addiction still has work to do. At least one study predicts Utah will experience a sharp rise in deaths related to alcohol, drug use, and suicide in the coming decades.

Buzzed Behind the Wheel 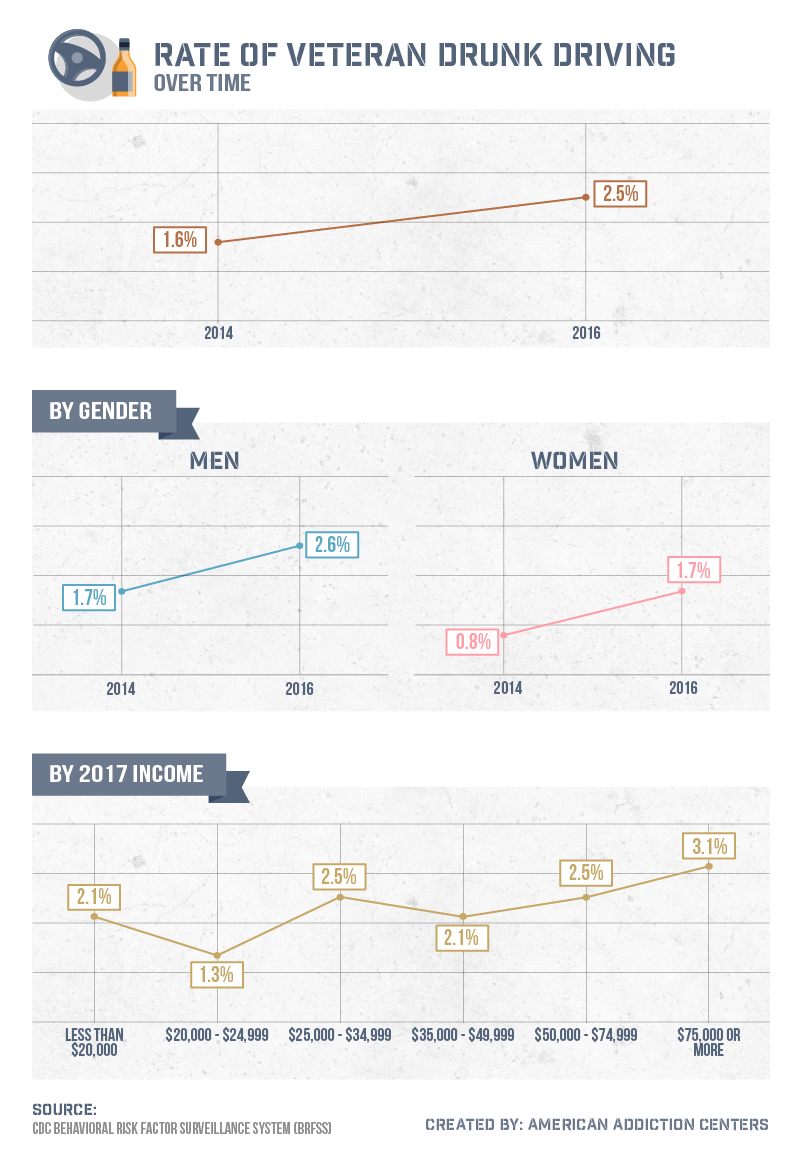 In 2016, more than 10,400 people died across the country as a result of alcohol-related crashes, and roughly 1 million drove under the influence. When combined, these findings suggest 29 people die every day in car accidents that involve a driver under the influence of alcohol – or one person every 50 minutes.

And even though some officials are trying to pass legislation that would allow veterans to avoid conviction in charges associated with driving under the influence, there’s no denying that American veterans contribute to the nationwide epidemic of drunk driving. Since 2014, the percentage of U.S. vets identified as driving while drunk increased from 1.6 percent to 2.5 percent. Those rates were concurrently higher among men than women but were highest among veterans of both genders earning $75,000 or more in 2017 (3.1%).

Written by: Editorial Staff is comprised of addiction content experts from American Addiction Centers. Our editors and medical reviewers have over a decade of cumulative experience in medical content editing and have reviewed thousands of pages for accuracy and relevance. Our reviewers consistently monitor the latest research from SAMHSA, NIDA, and other reputable sources to provide our readers the most accurate content on the web.

The following links are not exhaustive of the resources available to service members and veterans.

This is a listing and description of 500+ resources for Service Members, veterans and their families.  The list is compiled and maintained by Dr. Ray Monsour Scurfield, Professor Emeritus of Social Work, University of Southern Mississippi.  Dr. Scurfield is also in private practice with Advanced Psychotherapy located in Gulfport, MS. Updated October 2012

How to Talk to Kids About a Parent’s Brain Injury

(Comorbid conditions, or comorbidities, are two or more conditions that happen to occur in the same patient, at the same time)

PTSD In Patients With TBI

Living With PTSD and TBI

PTSD and Traumatic Brain Injury: Trauma Inside Out

Grants for Home Modification: 16 Resources for Homeowners with Disabilities

Signs of Suicide: How to Help

How & When to Hang the American Flag

A Guide to Cremation and Burial for Veterans: Everything You Need to Know for Making Proper Final Arrangements

Interested in Using a VA Home Loan? Here’s What You Need to Know