Skip to content
A doubleblind comparative study of microstimulation and placebo effect in short term treatment of the chronic back pain patientKellie Marksberry2018-06-13T12:34:51-05:00

This was the first published report introducing bioconductive therapy using the Alpha-Stim when it was still a prototype. 40 subjects were selected from the first author’s practice, from 19 to 63 years old (mean of 38.3 years), 58% females, with chronic (more than 12 months), persistent back pain with few, if any, remissions. 25 (63%) had low back pain, 15 (37%) had pain above T7, 31 (78%) had headaches, and 26 (65%) had extremity pain. After providing informed consent, they were divided into 2 matched groups based on a 2 week pre-study analyses of hourly 0 – 5 pain evaluation charts: one group received Alpha-Stim stimulation, and the other placebo. The same hourly pain charts were used during the actual 2 week treatment period, 2 weeks after treatment, and again, for an additional 2 weeks following a washout period of 2 months. Treatment was done at 16 measured low conductive sites following dermatomes derived from positive orthopedic and neurologic test findings (bioconductive therapy). The subjects in the Alpha-Stim group experienced an average pain reduction 37.26% greater than the placebo group. The 2 month followup showed a significant difference: 75.22% pain reduction in the real, compared to only 6.30% pain reduction in the placebo group. The placebo subjects may have experienced some therapeutic effect from the measurement current. No side effects were reported.

Notes: This study won a scientific research award from the American Chiropractic Association (ACA). This study has been plagiarized as marketing materials for the Electro-Acuscope two years after it was published. In the plagiarized version, only the authors names and the device used was changed. 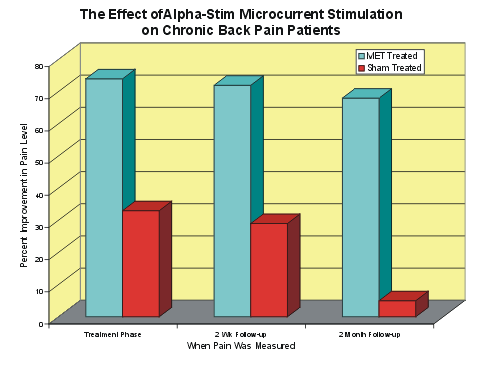