Funding Source, Location of Study or Author’s Affiliation
This study was conducted at The Warrior Combat Stress Reset Program at the Carl R. Darnall Army Medical Center at Fort Hood, TX. The data examination and the article were carried out by The Samueli Institute.

Objective
The purpose of this IRB approved study was to examine the efficacy of the US Department of the Army integrative PTSD program, the Warrior Combat Stress Reset Program (WCSRP) at Fort Hood, Texas, USA.

Design
The WCSRP had an evaluation design built into the program from the beginning. Service Members were screened for admission then pre-evaluations were done on day 1 of the 3-week program with post-evaluations done on the final day of three weeks. Evaluation results were coded and saved for analysis once resources were available. In 2012, the retrospective formal analysis began, and the data files were entered into a database for analysis.

Protocol Summary
The WCSRP is an intensive 3-week program broken down into three stages with several different Complementary And Alternative Medicine (CAM) modalities used throughout the duration of the program. Stage 1 was designed to reduce hyperarousal, improve sleep, emotional reactivity, and avoidance. In this stage, Alpha-Stim CES was used in the clinic and often assigned as homework for participants. Stage 2 targeted further sleep disturbances, pain, headaches, avoidance, and residual post-concussion symptoms. Several CAM modalities including Alpha-Stim CES were typically useful in this stage. Stage 3 focused on trauma and specific triggers.

Device Application Protocol
The Alpha-Stim CES treatments were initially carried out by the staff until patients were comfortable applying the treatment themselves.

Subjects
The mean age of patients was 33, with an age range of 22 to 62. Those married or in a relationship numbered 77%; with 37% educated at the GED/high school level, 55% having some college, and 8% possessing a degree. The cohorts were divided into junior enlisted rank (E-1 to E-5; 44%), and senior enlisted and officer groups (E-6 to LTC; 56%). All participants had deployed: 19% had deployed once, 61% had deployed two or three times, and 20% had deployed four or more times.

Data Analysis
The evaluation team included several tables in their report which illustrate the efficacy of the program. The table below shows the reduction in symptoms from 2008 to 2013. Patient satisfaction with the available CAM modalities was also surveyed during that time. These results are shown in the table below. 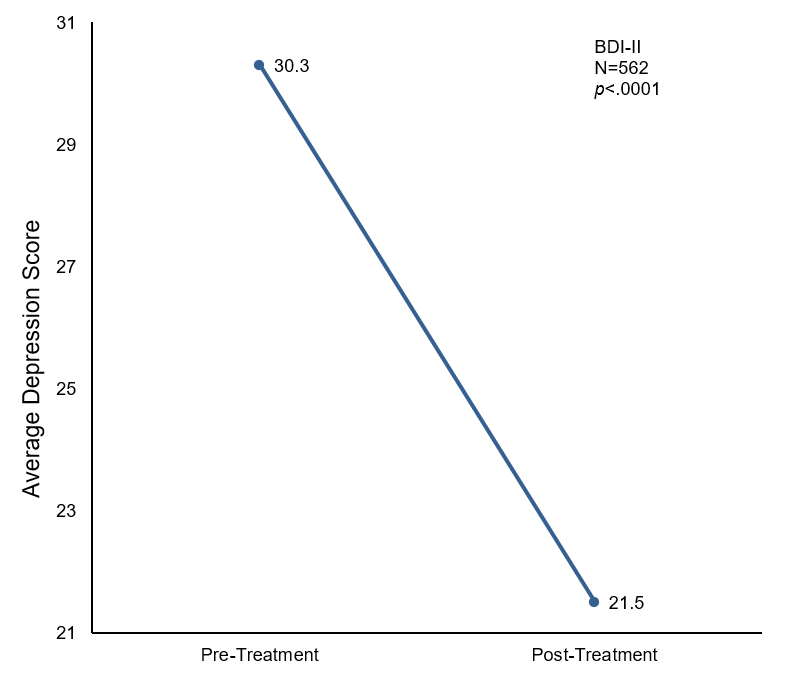 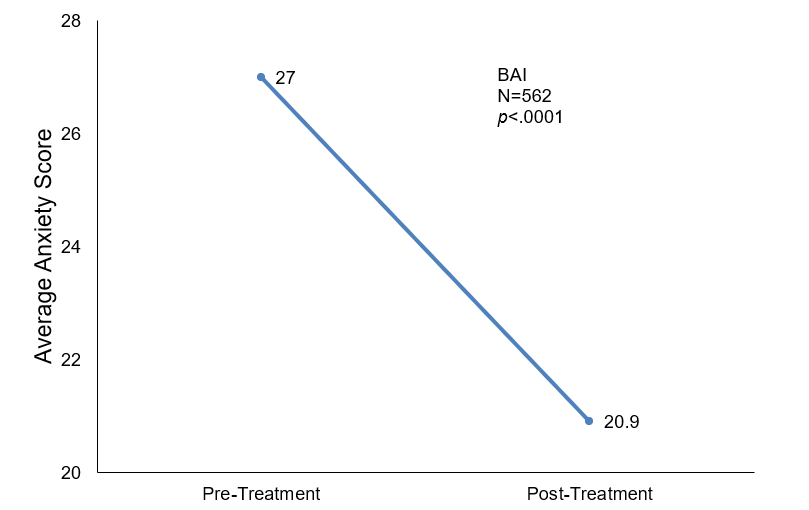 In order to test the hypothesis that the soldiers treated in the reset program had fewer combat stress/PTSD symptoms compared to before participating in the program, the change in instrument scores of each patient was computed. Sample paired t-test was applied to compare pre- and post-intervention outcomes. Longitudinal models were used to estimate the effects of the CAM therapies. Since satisfaction and symptom relief ratings for CAM therapies were measured repeatedly, the evaluation team was able to use generalized estimating equations (GEE) to account for correlations. A 95% confidence interval was used to assess the results. Average scores from 2008 to 2013 decreased:

CAM Outcomes
On average, 1.7 to 2-point improvement in the Numerical Rating Scale (NRS) score for pain, anxiety, and mood was shown from pre to post CAM treatment. The results are statistically significant, and no adverse events were noted in the CAM treatments.

Patient Satisfaction
Soldiers rated satisfaction with treatment modalities and the overall program on a 5-point Likert-type scale ranging from “extremely helpful” to “not helpful.” A large majority of soldiers found Reset helpful or very helpful in addressing hyperarousal and their individual issues. Dropouts numbered less than 10 soldiers out of 1,400 over the life of the program.

Conclusion
All health-related outcomes showed statistically significant improvements from pre to posttreatment. The trend toward increasing effectiveness over the years is interpreted as reflecting the addition of more CAM services. The WCSRP appears to be very successful in meeting its stated goals and objectives. The improvements in health were both statistically and clinically significant. The improvements in PTSD, anxiety, depression, and pain from pre to post treatment suggest the CAM sessions that include Alpha-Stim CES may have a positive impact on conventional behavior health treatment effectiveness.

Limitations
The observational design of the study precludes drawing conclusions about the comparative effectiveness of the WCSRP in relation to other treatment options. Other limitations include the lack of a follow-up time point to gauge if positive gains were sustained over time, lack of a comparison group, and lack of randomization.