Objective
The purpose of this study was to investigate if cranial electrotherapy stimulation (CES) can normalize the functional activity and intrinsic neural circuits of adolescents with Tourette’s Syndrome (TS) adolescents.

Key Inclusion Criteria
Male or female right-handed patients (less than 12 years old) with a diagnosis of TS (according to DSM-IV) were included in the study. All the patients were physical healthy and had an IQ of no less than 100. The patients were drug free for at least one month before enrollment in the study.
Key Exclusion Criteria
Individuals with the following conditions were excluded from the study; co-occurring anxiety and attention deficit hyperactivity disorder, current depression, and, current or previous history of psychosis.

Device Application Protocol
The CES treatment procedures used in this study were consistent with current established standards for clinical practice. Each patient was instructed to set the Alpha-Stim SCS current between 10 and 500 µA using ear clip electrodes. The frequency was 0.5 Hz with a pulse duration of 2 milliseconds. Patients titrated the duration and current strength of CES to their perceived optimal level. They did one or two daily CES sessions, ranging from 20 to 60 minutes each.

Yale Global Tic Severity Scale (YGTSS).
The YGTSS is a clinician administered scale that is used to evaluate the severity of motor and phonic tics. The clinician describes a list of possible tics, first motor and then vocal tics, that may have occurred during the previous week. Once the tics that occurred over the previous week are identified, the clinician asks about the frequency, intensity, complexity, and the effect that the tics had in the person’s daily life. These dimensions are rated and the combined total can be used as a measure for overall tic severity. The YGTSS also includes a section that evaluates the overall impairment caused by the tics that is rated from 0 to 50. A score of 0 indicates that TS has no negative impact on a person’s life, while a score of 50 indicates a marked negative impact on the person’s life.

Data Analysis
Descriptive statistics were used for YGSST scores. Differences were examined using paired t-tests. For fMRI analysis, Independent component analysis (ICA) with hierarchical partner matching method was used to examine the functional connectivity between regions within cortico-striato-thalamo-cortical (CSTC) circuit. Granger causality was used to investigate effective connectivity among these regions detected by ICA. The authors then performed pattern classification on independent components with significant group differences that served as endophenotype markers to distinguish the adolescents between TS and the normalized ones after CES.

The decrease in YGTSS scores indicating a decrease in motor and vocal tics from baseline to the end of 24 weeks of CES treatment was highly significant, p = < 0.01 (Figure 1). 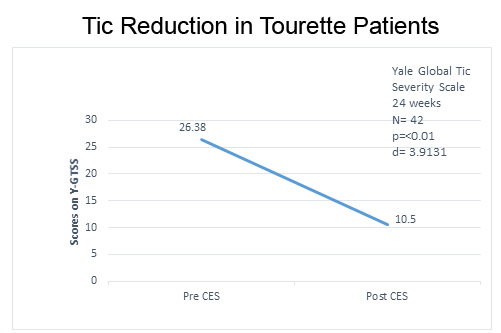 Functional magnetic resonance imaging (fMRI).
After CES, subjects exhibited altered spontaneous functional connectivity in brain areas within the CSTC circuit involved in motor generation or control, including SMA, caudate, PFC, ACC, and default mode network (DMN), primary in PCC. The functional activity and connectivity in motor pathways were suppressed, while activations in the control portions of CSTC loop were increased in subjects after CES compared with before CES.

Authors’ conclusions
The normalization of the balance between motor and control portions of the CSTC circuit may result in the recovery of TS adolescents.

Quality of the research
This was a non-experimental, naturalistic study that was done to determine if CES may be beneficial for individuals with TS. A strength of the study is the investigators used baseline and post-treatment fMRI scans in a subset of the subjects to identify changes in brain function. The design was appropriate for this study as a critical review of the literature revealed no previous research could be found on using CES to treat TS. This initial, exploratory study provides a solid foundation for a larger, randomized controlled trial that examines the efficacy of decreasing the motor and vocal tics of TS.

Comments on the findings of the study
The distinction between functional and effective connectivity is essential to understand when interpreting the results of studies like the present one. Functional connectivity describes the statistical dependencies between two or more variables (e.g., regions of neural activation within the brain). These dependencies can be undirected (as in correlation analysis) or directed (as in Granger Causality and “transfer entropy”; Granger 1969). Importantly, functional connectivity analyses make minimal assumptions about the physical underlying mechanisms of action. In contrast, effective connectivity aims at finding the simplest possible circuit diagram explaining observed responses (Friston, 2013). For example, models of effective connectivity allow researchers to compare how well distinct mechanistic models perform given an observed set of data. The effective connectivity approach is exemplified in Dynamic Causal Modeling (DCM) within a Bayesian statistical modeling framework. However, DCM is suited for (a) models where only a few regions of activation have been identified (or will be) and (b) models to be theoretically posited aprior (i.e., it is a theoretically driven, model testing approach to understand neural mechanisms of action propagating upward to the network level). When little is known apriori about the mechanistic nature of the neural system as in the present study, an attempt is made to bridge functional and effective connectivity approaches to provide a foundation for understanding the mechanism(s) of action that can then lead to models of effective and functional network connectivity. To this end, the authors use a state-of-the-art approach, independent components analysis (ICA) to identify regions of activation (from BOLD signal data acquired using fMRI) that are involved in resting state fMRI data with TS patients. This step is followed by hierarchical partner matching (HPM) to identify functional brain networks. Next, Granger Causality was used to test for significant causal relations between identified regions of interest (e.g., see Table II, p. 1277). Granger Causality captures temporal properties of fMRI data while also controlling for the simultaneous regression of all variables in the model (these models are also known as multivariate autoregressive time series models (Price, 2012). Finally, the authors also used pattern recognition methods based on resting state fMRI data to verify the normalization in intrinsic brain functional activity and activation connectivity between TS patients before and after CES treatment.

One challenge when studying a condition such as TS is that the disease involves the motor and control systems from a biophysical and neural perspective. Importantly, the authors found that the “motor” and “control” parts of the CTSC system lack normalization in TS patients. Specifically, the authors here found that an increase in functional activity and connectivity in PCC suggesting normalization (i.e., return to a state similar to that of non-TS) of functional deficits associated with impaired motor inhibition.

Statistical analysis
In this study the researchers examined blood oxygenation level dependent (BOLD) fluctuations and intrinsic brain functional connectivity based on resting-state functional MRI data. The researchers used an independent cluster analysis (ICA) at the individual level followed by hierarchical partner matching (HPM) to identify functional brain networks in resting state condition. The use of the ICA algorithm with HPM provided a solid analytic strategy for identifying ICs that were reproducible across individuals. The number of ICs to generate for each subject was determined by using minimum description length (MDL) for the lower bound and Akaike’s Information Criterion (AIC) for the upper bound. The interval for their study was between 20 to 130 clusters (with an interval or increment of 10). To the authors’ credit, they employ cross-validation approaches to investigate the tenability of their regional activation identification strategy based on the before and after CES subject data. Cross-validation is an important step when exploratory search strategies are used in high density data structures. Granger causality was also used to measure causal interactions among components of the cortico-straito-thalamo-cortical (CTSC) circuit that generates or controls motor behavior.

The present study provides many strengths methodologically and analytically. Overall, the methodology and analyses used are well-suited and represent the current state-of-the-art considering the goals of the investigation. Certainly, replication with a more rigorous design is recommended given the sample size and the fact that no sham group was employed. A recommended future study is to include randomized controlled trial (RCT) using a control (sham condition) and treatment (CES) condition. Additionally, given the findings of the present study, it is possible to posit a theoretically mechanistic model that can be formally evaluated using DCM analysis. Finally, as the authors correctly note, fMRI scanner noise may affect subjects in different ways (i.e., may affect subject-specific fMRI BOLD signals). Therefore, silent techniques such as EEG should be used to compare the results with those obtained using fMRI data.

Shenhong Weng is an Associate Chief Physician and an Associate Professor at Renmin Hospital of Wuhan University, Wuhan, China.

Pengwei Wang is a Lecturer at the School of Information Science and Engineering, Shandong University, Jinan, China.

Jun Long is a Professor and Vice Dean at the School of Information Science and Engineering,
Central South University, Changsha, China.