America is no longer the international leader in medical research. Ninety percent of new therapies approved in 2017 had testing outside the U.S. and Canada.1 In the case of the subject matter of this article, the research and researchers came as a surprise, even to the author of this review who is the inventor of Alpha-Stim brain technology and to its manufacturer. But what a surprise this was! An FDA-cleared medical technology invented in the USA and on the Federal Supply Schedule (FSS) for the DOD and VA currently in use by more than 100 Veteran Affairs Medical Centers as well as the U.S. Army, Marines, SEALS and U.S. Navy at selected facilities,2 is also being used and studied by the People’s Liberation Army of China. We did not know that until we found the study that this article reviews.

The study was titled, “Effects of Cranial Electrotherapy Stimulation on Suicidal Ideation and Event Related Potentials in Patients with Treatment Resistant Depression,” published in the China Journal of Health Psychology in 2021.3 It was conducted at the Jiading District Mental Health Center, Shanghai, China, and the Mental Disease Prevention and Treatment Institute of the Chinese People’s Liberation Army. The purpose of the study was to investigate the effects of Alpha-Stim CES (Electromedical Products International, Inc., Mineral Wells, Texas, www.alpha-stim.com) upon suicidal ideation (thoughts) and its electrophysiological mechanism in patients with severe major depressive disorder (MDD).

This level of depression is characterized by high morbidity and high disability rates, and 40-70 percent of these patients report suicidal ideation. About one-third of these patients are treatment resistant; meaning they failed 2 or more anti-depressant drug treatment trials at full-dosage and duration.

“45,390 American adults died from suicide in 2017, including 6,139 U.S. Veterans. Our nation is understandably grieving with each suicide, prompting our collective and tireless pursuit of evidence-based clinical interventions and expansion of community prevention strategies to reach each Veteran. VA offers through this report a renewed and determined call to unrelentingly address suicide in our Veteran population and our society, as suicide has no single cause and the tragedy of suicide affects all Americans.”4

Regardless of the government’s reported efforts, the suicide rate is increasing, as shown in the chart below.4 Something more must be done.

Prior Research of Alpha-Stim CES for Depression

This article is about one research study, but it is far from the only study on Alpha-Stim CES for the treatment of depression. Alpha-Stim has been on the market since 1981 and cleared by the Food and Drug Administration (FDA) to treat depression with a doctor’s prescription (e.g., physician or clinical psychologist) since 1992. On December 20, 2019, the FDA published an Order in the Federal Register requiring CES manufacturers to submit a Premarket Approval (PMA) application, the device equivalent of a new drug application, to maintain the depression indication for use.5 In response, Electromedical Products International, Inc. submitted a premarket application for its 40 year old technology on March 12, 2021, just two weeks after locating this study by the PLA. 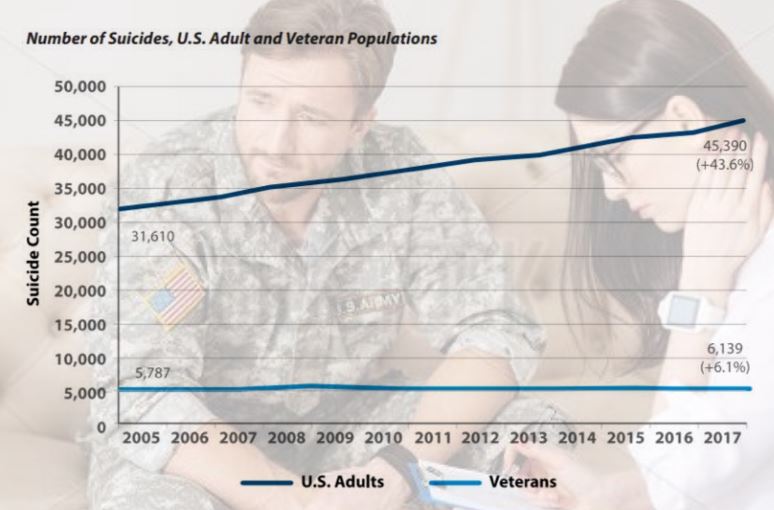 The science section of the PMA contains extensive discussions of the history of CES and Alpha-Stim technology in particular, the putative and researched mechanisms by which it works, including EEG (showing more soothing alpha brain waves) and fMRI studies (showing cortical deactivation), a comprehensive discussion of depression spectral disorders, and 30 studies using Alpha-Stim CES for depression, half of which were randomized comparator-controlled clinical trials (RCTs or double blind studies), with the balance being non-randomized studies of interventions (NRSI). This consisted of open label, retrospective and case series studies. All of the studies met the FDA’s definition of valid scientific evidence (VSE), and all were conducted at universities or government institutions around the world, including the VA, U.S. Army, and now, the Chinese Army. All had significant results in reducing depression, meeting the gold standard of science – replication. The PMA even included a meta-analysis of the studies that show a medium effect (which is better than reported in drug studies of depression) in favor of the active treatment group for the RCTs. There can be no doubt that Alpha-Stim CES is effective in treating depression. However, this is the first study showing Alpha-Stim CES can also significantly impact suicidal thoughts. 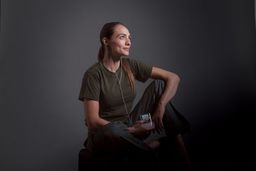 In the PLA study a total of 67 participants, aged 18 to 60 years of age, all diagnosed with treatment resistant depression (TRD), were randomly divided into two groups. The Alpha-Stim CES group received active CES treatment for 20 minutes, 3 times a week for 8 weeks. The placebo (sham-treated) condition used an identical, but non-powered device in the same manner as a control. Both before and subsequent to treatment, suicidal ideation, depression, and physiological measures of patients in both groups were assessed using standard measures. The Beck Scale for Suicide (BSS) was used to assess suicidal ideation, the Hamilton Depression Rating Scale (HAM-D) to assess depression, and event-related potentials were measured using the Contingent Negative Variation (CNV) measures before and after treatment.

Prior to treatment, the baseline suicidal ideation, suicidal risk, and depression scores between the two groups were not statistically different. However, after CES treatment, the scores of HAM-D (t=-2.0865, -2.1518; p<.05), and the scores of suicide ideation on the BSS (t= 2.0315, p<.05) in the CES group were significantly lower than that of the control group. 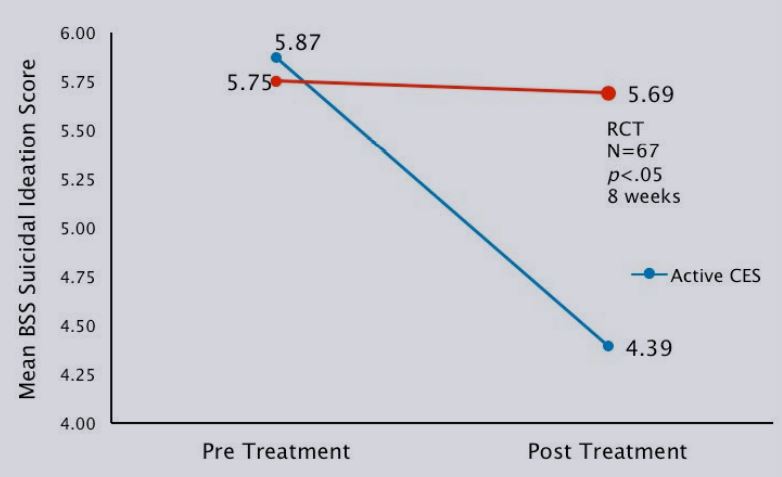 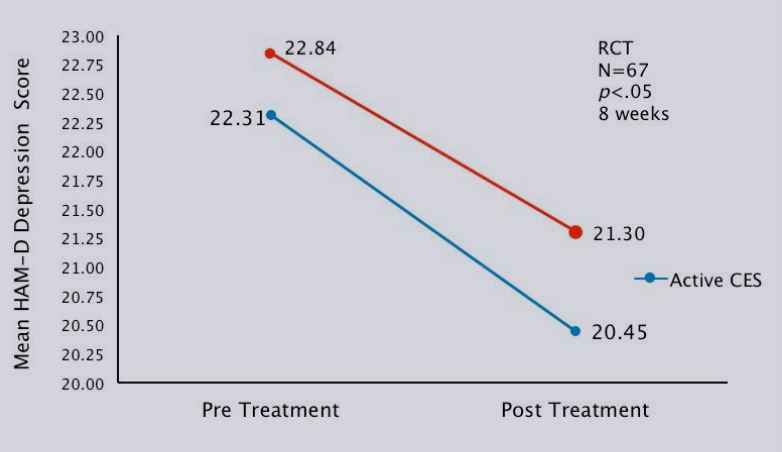 Change of depression symptoms before and after treatment

Baseline CNV incubation period and amplitude, PINV occurrence rate, and other indexes between the two groups were not significantly different prior to treatment, but after treatment, M2 amplitude increased and the incidence of PINV decreased in the CES group (t= 2.3513, p<.05; χ2= 5.0708, p<.05). This represented a statistically significant difference compared to the control group (t =-2.0252. p<.05; χ2=4.7308, p<.05).

Change of key indexes of CNV before and after treatment

The authors concluded that Alpha-Stim CES treatment effectively reduced suicidal ideation in patients with treatment-resistant Major Depressive Disorder. They proposed that the observable electrophysiological changes induced by CES results in improvement in cognitive processing speed that mediates suicidal ideation and that CES treatment stimulates the production of certain neurotransmitters, such as 5-hydroxytryptamine, which also affects the chemical activity of a neuron’s peripheral region, further regulating activation. These electrophysiological changes may represent the mechanisms of action of CES at relieving suicidal ideation.

The observable change in Event-Related Protocols (ERP) before and after CES treatment suggests that ERP may have clinical application as a potential warning or indicator of suicidal ideation that may encourage early diagnosis and appropriate treatment, such as CES. Since there is no other proven safe and effective treatment for suicidal ideation in treatment-resistant Major Depressive Disorder patients and the data published by the VA demonstrates that the incidence of suicide is increasing, presumably because the interventions being used now are ineffective. The evidence-based Alpha-Stim CES technology should be prescribed immediately to anyone having suicidal thoughts as a preventive treatment in these patients to potentially save their lives.

Daniel L. Kirsch, PhD, DAAPM, FAIS is a neurobiologist who invented Alpha-Stim technology in 1981 when he founded Electromedical Products International, Inc. He retired from EPI in 2020 after 40 years as Chairman of the Board. He also retired as a U.S. Navy contractor, pain and stress specialist in 2019. He currently serves as President of The American Institute of Stress and Editor-in-Chief of this publication, Combat Stress, and Contentment magazine.

Dr. Kirsch has designed medical devices and their applications and developed clinical systems for implementing pain and stress normalization technologies; primarily Alpha-Stim, biofeedback and neurofeedback. He practiced and taught his original techniques throughout the world, from the USA through North and South America, Europe, The Middle East, China and Japan over four decades.

He is a pain specialist board certified by the American Academy of Pain Management (DAAPM) and was the recipient of their Richard Weiner Pain Educator annual award that is given to an individual who has contributed to the  advancement of the field of interdisciplinary pain management through the training of pain management professionals. He had been working extensively with the United States military (Army, Navy, SEALs, Marines and Veterans) from 2005 through his retirement in 2019. Although he spent a lot of time in China over an 8-year period teaching electromedicine, pain and stress management, he only met with the PLA in China once.

Dr. Kirsch was a co-editor of Psychiatric Clinics of North America: Stress in Health and Disease, (Elsevier 2014), and book chapters including contributing to Healing War Trauma: A Handbook of Creative Approaches (Routledge, 2013), and Cranial Electrotherapy Stimulation for Anxiety, Depression, Insomnia, Cognitive Dysfunction, and Pain in the textbook, Bioelectromagnetic and Subtle Energy Medicine (CRC Press, 2015). He contributed to the book, Complementary and Integrative Treatments in Psychiatric Practice (American Psychiatric Association, 2017), and was featured in Justin Smith’s 2017 documentary movie, Body Electric: Electroceuticals and the Future of Medicine and it’s 2019 sequel, The Brain Electric: Healing Wave of the Future, and co-authored a chapter on CES in the book Using Technology in Mental Health Practice published by the American Psychological Association (2018). Dr. Kirsch was also featured in Justin Smith’s latest documentary series, Mismatched: Your Brain Under Stress, produced by The American Institute of Stress and released in March 2021.