Mother of An American Hero

In July of 1981, I gave birth to my son. He was my only child. Twenty-one years later, he joined the military. It was then that I realized that I had actually given birth to a Soldier.

The day he was sworn into the Army was the day I “officially” became the Mother of an American Hero.  I wore that title with a great deal of pride, but I had no clue about the degree of anguish that title would bring into my life.

In March of 2003, the news stations were reporting that the Iraqi War had begun and that my son’s unit was heading to Baghdad. As I watched my only child cross over into Iraq with the 3rd Infantry Division, I was overwhelmed with emotion. It is so very hard to put into words the stress and agony that I, as a military mother, felt the day I was watching the news and saw history unfold live on TV. I watched as tanks and other military vehicles rolled through the Iraqi desert, knowing that my son was in one of them. The thought of my only child entering a combat zone was more than I could bear. Fear filled my entire soul. I remember crying so hard that I soaked the shirt I was wearing. I remember praying and praying and praying like I had never prayed before. I remember having to concentrate on my breathing, because I knew that if I was unable to get it under control, I would ultimately pass out. I remember coming to the realization that I was in a place where I could no longer keep him safe. As a mother, my heart ached.

I had been glued to the television for several hours, when my husband reminded me that our son was well trained, athletic and was doing what he wanted to do. His words brought me some comfort. Over the next few days, I decided that I had to figure out a way to deal with the strain of my son’s deployment in time of war so that this degree of worry and distress wouldn’t kill me. I had to find ways to keep my mind busy and myself occupied with something else other than watching 24/7 news coverage. Finding a way to ease my stress and to stay connected to my son was the path I was determined to follow.

The following are a few ideas of what worked for me and, hopefully, will work for other military mothers, as well:

In closing, I would like to thank the generations of military mothers that came before me and those that will follow. When we are given the title, “Mother of an American Hero”, we should hold our heads up high and remind ourselves that we, too, have served this country. This title is one that deserves tremendous love, respect and honor. May God bless the Mothers of American Heroes. 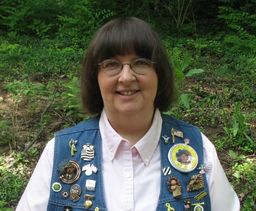 Chaplain “Mom Bev” Peyton, has been supporting our American troops since 1975: sending cards, writing letters and sending care packages for over 46 years! One of the letters I wrote to a Soldier was shared and read to thousands of troops on Palm Sunday at the Embassy in Baghdad.

In 2002, my son enlisted in the Army and I then became the mother of an American Hero.

I am the founder of Operation: Card Angels in Kettering, Ohio. This is a card ministry group that sends words of encouragement to the troops, wounded heroes and Veterans. In addition, we support the USO’s around the world and Honor Flights across the country. We also make cards for the troops to send back home to their loved ones (i.e., happy birthday, miss you and holiday cards). I have volunteers all over America.

I am also one of the founding members and Past President of the Blue Star Mothers of America, Miami Valley Chapter #3, in Kettering, Ohio. Under my leadership, the local BSM chapter became the largest chapter in the Nation. While in this organization, I oversaw and presented Gold Star Banners to the mothers and families of fallen Heroes in my area.

Over the years, I have worked with top officials at the White House, the U.S. Senate and all ranks within the military. When President Bush was in office, he had a top advisor that would always take my phone calls. I have also worked with a Senator and filing four congressional investigations against one military base.

Other nonprofits often contact me to learn how to educate, motivate and delegate people to become involved in growing their businesses. I have hosted hundreds of care packing parties for the troops at corporations, churches, schools, scout groups, the Dayton VA and senior citizen centers. I have spent my life volunteering with Operation: Card Angels, Operation: Show Our Love, Operation Spirit 4 Troops, Operation Gratitude, Operation Write Home, Operation Thank You, Chaplain’s Wings, Pink Camo, Heads at Ease, Soldiers’ Angels, The Yellow Ribbon Support Center, Cards for Soldiers, Honor Flights across the country, Letters to Soldiers Club, Tell Them Thanks, Blue Star Mothers of America, the Thank You Foundation (Ohio) and Marine Comfort Quilts. I have also been an advocate for children with disabilities throughout the State of Ohio.

I was awarded the National Citation of Exceptional Service Award from the AUSA and the Army National Guard Team Total Victory medallion and pin for my volunteerism and service.