As stress levels rise, UAB Hospital calls in the dogs 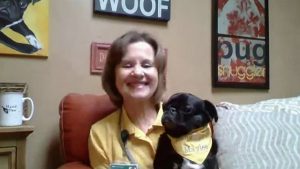 Hand in Paw is partnering with UAB Hospital to bring cheer to nurses, doctors, and other staff who are facing additional stresses caused by the COVID-19 pandemic. Pam Strange and her pug, Maylee, were among the therapy teams bringing a smile to UAB employees. (Bob Shepard/UAB)

Just about everybody likes dogs. Even virtual dogs. At UAB Hospital, dogs from Hand in Paw are used as therapy for patients and health care workers alike. So what happens when the novel coronavirus pandemic shuts down in-person visitation from Hand in Paw’s volunteer humans and dogs? You take the show on the road virtually, via telemedicine.

“Staff were so excited, they just wanted to come up and pet the screen.”

Sometimes you just need a dog. Even a virtual one.

That is the report from Wendy Walters, the hospital’s clinical ethics consultant, who took two of Hand in Paw’s therapy dogs into UAB’s COVID-19 intensive care unit by means of a video feed on a telemedicine cart. Her goal was to ease the stress on health care workers who have been caring for very sick patients under very trying circumstances for about four months.

“I have a tremendous amount of concern for our front-line caregivers,” said Walters, who trained as a social worker, grief counselor and ethicist. “They are so involved with their patients, and they are exhausted and stressed. I am trying to find ways to bring smiles to their faces, even for just a moment. The dogs are one way to do that.”

Walters arranged for two of Hand in Paw’s volunteer teams, Pam Strange and Maylee, along with Susanne Webb and Dinah, to visit with health care workers in five UAB nursing units a few weeks ago. Using a fully equipped telemedicine cart, Walters rang up the dogs and volunteers on a video call and rolled the cart into the nursing units.

“We did this just for the staff,” Walters said. “And there was overwhelming excitement, a little bit of a break in a stressful day. They told me they needed something like this so badly, and it made them feel that someone was taking time to do something for them.”

Even though the dogs were only on a screen, staff reached out. And the dogs did, too. They reacted to their names and the voices on the screen, making it seem as though they were physically there.

“The dogs were so well trained and responded to the screen,” Walters said. “They connected when they heard their names. We could have both dogs on the screen at the same time, and it was wonderful.”

Walters will roll the dogs in again once a week to reach even more of the hospital’s overtaxed medical staff. UAB thanked Hand in Paw for helping to make these stress-reducing visits available.

This story originally appeared on the University of Alabama at Birmingham’s UAB News website.