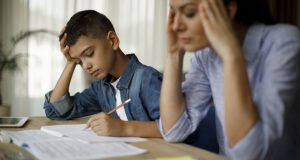 The way parents feel and behave often rubs off on their children. Kids’ own life paths can be influenced by the strength of their parents’ romantic relationship, for example, or how often their parents lie to them.

To examine how stress is passed on from parent to child, Sara Waters from Washington State University Vancouver and colleagues looked at the physiological responses that occur when parents suppressed their anxiety. A total of 107 parents and their children aged between 7 and 11 were first fitted with ECG sensors to measure the heart’s  “pre-ejection period” (PEP), a measure of sympathetic nervous system activation, before spending five minutes listening to soothing music through headphones.

Parents were then separated from their children and completed a stress test, in which they were asked to give a five-minute speech about themselves and then answer five minutes of questions in front of two evaluators. During the test, evaluators provided negative, non-verbal feedback, shaking their heads, crossing their arms and frowning.

The stressed-out parents were then assigned to either a “suppression” or control condition, before being reunited with their children. Those in the suppression condition were asked to mask their emotion, behaving in such a way that their child would not be able to know they were feeling anything at all, while those in the control condition were told to act naturally, as they would at home. Parent and child were then asked to engage in a six-minute conversation about a source of conflict in their relationship, a six-minute cooperation task in which they built with blocks, and six minutes of free play.

Trained observers who rated these interactions found that parents and children were less warm and engaged with each other in the suppression condition. There was also a significant link between a mother’s physiological stress and that of her child: mothers’ PEP reactivity at  one-time point was related to children’s reactivity shortly thereafter. In the control group, however, stress was not transmitted from mother to child.

Interestingly enough, stress wasn’t transmitted from fathers to their children, which the team believes is down to how men deal with stress outside of laboratory conditions. Because men are more likely to say they’re fine when they’re not, while women are more likely to show how they’re feeling, the team argues that children were more used to emotional suppression in their male caretakers and were, therefore, less affected. However, fathers in the suppression condition did become linked to their children’s physiology in the opposite direction: they picked up stress from their children, not the other way around.

As the study focused purely on pairings between a single child and parent, future research could focus on emotional suppression and stress in larger groups or family systems, exploring how a second parent, sibling, or other family member affects this physiological link, for instance. Researchers could also examine the techniques that parents use in the control condition: their warm and engaging interactions may stem from specific, positive emotion regulation strategies rather than simply being the result of not suppressing their emotions.

Hiding stress from your children is entirely understandable — you may wish to protect them from negative feelings and see emotional suppression as the best way to do that. But, as Waters says, it may be more comforting for children “to have their feelings honored” — listening to them honestly, rather than brushing over them altogether.

– Keep It to Yourself? Parent Emotion Suppression Influences Physiological Linkage and Interaction Behavior

By Emily Reynolds  a staff writer at BPS Research Digest