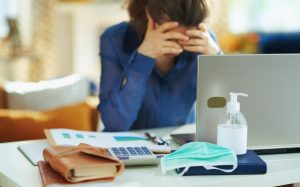 Doctors say they’re seeing an increase in the number of people coming in since March with stress-related symptoms such as headache, fatigue and mild nausea. iStock

FARGO — As Danielle Verhey of Fargo approaches her 30th birthday in July, she’s sick from stress.

“What is stressing me out is largely a lack of trust in the people in charge and the feeling that while we have experts — doctors, etc. — who knows how to help, it doesn’t seem like anybody is interested in listening to them,” said Verhey. “It feels as if the nation has largely given up and is content to let whatever awful thing just run roughshod over it. If, however, you complain about this, there are plenty of people lined up to try and make you feel stupid for caring.”

Danielle Verhey, 29, Fargo says she’s suffering from headaches, fatigue and mild nausea from the stress of what’s happening in the world these days. Submitted photo

Verhey says the stress is causing her to suffer physical symptoms such as headache, fatigue, and nausea. She’s experienced “stress sickness” in the past, but she says it’s gotten much worse since March when the pandemic started and lately with the rising racial tensions. And she’s not alone.

“I’ve seen a huge increase in the number of people coming in specifically for mood concerns,” said Sanford Health Integrative Medicine physician assistant Dani Swanson. “I’m guessing with 80 percent of the patients I’m seeing these days, we’re having a discussion about mood. It’s affecting everyone.”

Swanson says stress sickness is “a very real thing” that people too easily dismiss as “no big deal” and something they should just be able to get over easily. She says while short-term stress — “the flight or fight” response — is a great defense mechanism that can keep you safe and healthy, our bodies are simply not meant to handle the chronic activation of this system. Swanson compares chronic stress to potholes in the road, and you are the car.

“Every now and then we can take it, but if we’re hitting those potholes over and over, it really takes a toll on us,” she said. “Stress does horrible things to the body.”

What are the symptoms of stress sickness?

The most common complaints are headache, sleep issues (fatigue) and digestive problems.

“Our gut, mind and stress reaction are so closely tied together, that’s why you feel butterflies in your stomach,” said Swanson.

Stress can also lead to irritable bowel syndrome, other gastrointestinal issues or a loss of appetite. As stress worsens, people tend to tense up their shoulders, leading to headaches and migraines. And Swanson says the ability stress has to disrupt sleep can exacerbate all of the other symptoms.

Sanford Health Integrative Medicine Physician Assistant Dani Swanson says about 80 percent of her patients these days mention “mood” problems due to the stress of COVID-19.

“Sleep is our body’s way to heal,” Swanson said. “But hitting these ‘potholes’ (stress) causes a disruption in your sleep rhythm. So instead of having that burst of energy in the morning, you’re feeling awful, like you could sleep another five hours, and at night when it’s time to wind down, you’re revved up thinking about everything.”

It’s not just traditional medicine seeing a rise in “stress sickness,” Susie Grimmett, an intuitive/medium and Reiki master who once practiced in Fargo, says she’s also seen a rise in clients complaining of stress issues.

“I am seeing many clients experiencing digestive issues and sleeping issues due to the growing fear and uncertainties. I have never seen the world so divided on so many issues,” Grimmett said.

Stress can disrupt sleep rhythms making you too revved up with thoughts to fall asleep leaving you sleep-deprived by morning. iStock.

What can you do about it?

Swanson says the first thing she does is thank the patient for coming in and addressing the issue and not dismissing it as “just stress.” She also recommends looking at lifestyle changes like eating vegetables every day, eating less sugar, and drinking less coffee.

“Food is medicine,” she said.

Swanson also recommends “getting your mind right” with meditation, yoga, and breathing exercises.

Taking a mental health break from the news and social media can help. Swanson says if those strategies don’t work, medication can be an option.

Verhey says to cope she’s turned to creative outlets, such as painting and writing. She says she also enjoys nature photography and has made it a point to visit all of the parks in and around Fargo she hasn’t seen before. She’s even found an unusual place where she finds some peace.

“Cemeteries, especially, proved to be good places to explore, as they are shady and generally contain very few other people, making it easy to maintain social distance. Examining the different old markers has turned into a fun art history project, and I’ve managed to inadvertently learn more about the history of Fargo as a result,” she said.

Verhey says she’s open to trying new strategies for coping with her stress sickness. She says she knows she should try things like yoga, but she also wants to address the root causes of her stressors.

“What can I do that will actually help slow the spread of COVID-19 or what can I do to further the causes of justice that have overtaken the news with waves of fear and anger?” she said.

Verhey says maybe that means not sharing and commenting on divisive articles on social media, but instead taking the time to write to congressional representatives or donating to someone in need.

Grimmett says she starts each day with deep breathing and sending healing energy to the earth. And she tries to share words of encouragement with her clients.

“I try to remind them that we are stronger than we could ever imagine,” she said. “I have found comfort recently after being shown that there truly is light at the end of this chaotic tunnel. I noticed that everyone intuitively seems to be breathing a little deeper now. Unfortunately, it’s through a mask.”

Verhey also has words of encouragement for fellow sufferers.

“The world has not gotten worse, but the bad bits are easier to see and much, much harder to ignore. Stress sickness, then, is to be expected, and I urge the sufferer not to consider it a weakness or a moral failing on their part,” Verhey said. “Humans evolved by hunting wild goats on the savanna. We aren’t built for this. We’re a fish out of the water, and any symptoms you go through are not your fault.”