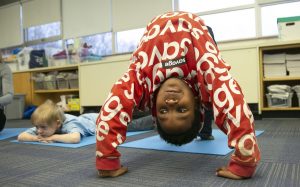 SOUTH BEND — “As I breathe in, as I breathe out, my arms reach out to the sides,” George Gandy read aloud to a dozen of his Darden Elementary School classmates.

“Lift up to the sky,” the third-grade student said as his arms stretched toward the ceiling, “and then relax back down.”

George passed the book, “Good Morning Yoga: A Pose-by-Pose Wake Up Story,” along to another student in the yoga circle. The group continued to practice other exercises pictured, from the bridge to the downward-facing dog.

Once the kids were warmed up early on this recent morning, Kourtney Bradshaw-Clay got out a chime for meditation. As the echo of the instrument filled the room, students sat cross-legged on blue yoga mats and placed one hand on their upper chest and the other on their belly.

“Deep breathe in,” Bradshaw-Clay said, in a calm, relaxing voice, “and out.”

Bradshaw-Clay is a yoga instructor with Mindful U, a traveling program that provides services to parents, teachers, and students in Michiana. The organization was founded in 2018 by Rachael von Eschenbach, a pediatric speech-language pathologist, and yoga teacher who is certified in children’s mindfulness, and Mindi Dugard, a nurse and yoga teacher.

The trio visits the South Bend elementary school twice a week to lead 45-minute sessions to second- through fifth-grade students who have been identified as needing extra help honing emotional and social skills.

The interactive, research-based yoga and mindfulness practices are designed to help the kids improve their emotional resilience, self-regulation, focus, and decision-making and to strengthen their relationships with peers.

This is the second year Darden has participated in the Mindful U program, which has also been taught at Good Shepherd Montessori School in South Bend, Prairie Vista Elementary School in Granger and Covenant Christian School in Mishawaka.

The classes are free for students to participate in.

Monica Leyes, a spokeswoman for the South Bend district, said the elementary school pays Mindful U a flat rate of $75 an hour for their services. The money comes from Title I funds and federal grants that support social and emotional learning programs.

Even though the program is fairly new, Darden Principal Patty Karban said she has already witnessed changes in students’ behaviors and attitudes.

Now, after participating in the mindfulness program, the student is able to “calm his mind” when stressed, Karban said. He still leaves the classroom but stays in the hallway and practices breathing techniques that he’s learned to gain control.

Von Eschenbach said the training has also expanded to teachers, who have now implemented Mindful U practices — like the breathing exercises — into their classrooms.

“It presents other options that aren’t just a threat of punishment if a student is struggling or misbehaving,” Von Eschenbach said. “A teacher now has the tools to say, ‘OK, let’s all breathe together.’”

“The clearest benefit is stress and emotion regulation. That allows kids to cope with challenges that they face and there are and will be many in their lives,” Khalsa told The Tribune. “Yoga can also improve mind-body awareness. When you become more aware of thoughts, sensations, and actions, you are in a better position to move in a positive direction. … You become more aware of the consequences of your behaviors thereby facilitating positive behavior change, and that is powerful for students.”

Yoga and mindfulness practices are growing in popularity in K-12 schools. A 2015 study found three dozen different yoga organizations offering yoga programs in 940 schools across the country, with more than 5,400 instructors trained to offer yoga in educational settings at that time.

The trend has also attracted some criticism from parents nationwide who have claimed that schools are pushing the Hindu religion on students. In Alabama public schools, for example, yoga has been completely banned by the state’s board of education since the early ‘90s.

Karban said she hasn’t heard any complaints along those lines from parents. In fact, many have participated in the free yoga and mindfulness sessions, she said, and say it’s helped their kids succeed in school and at home.

“We have students that have gone through trauma, grief or are experiencing different stressors in their homes,” Karban said. “This is just one way to teach them to know that they’re going to be OK and they have the strength mentally to get through anything. The power of the mind and belief that they have that control is more important than anything else.”