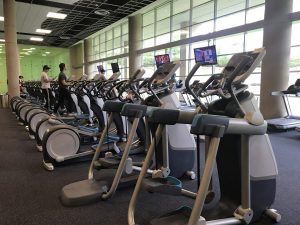 Search stress relief online, and at the top of almost every list, you’ll find exercise.

It’s not just lifestyle bloggers who are making the recommendation. Mayo Clinic lists physical activity as the top stress remedy, and the American Psychiatric Association also recommends exercise as a form of stress relief based on multiple comprehensive studies.

Working out does reduce certain stress hormones — like adrenaline and cortisol — in the body. It also increases the production of endorphins, which are the body’s mood elevators, according to Harvard Health. But aerobic exercise — which is cardio-based — isn’t the only form of stress relief, and, in some cases, it isn’t the most effective form of stress relief either.

While the difficulty of the work itself is stressful for many students, sheer lack of time is just as much of a stress factor. Many college students feel that they don’t have enough hours in the day to get all of their work done, take care of themselves and work a job. Sometimes there are easy solutions — like waking up an hour earlier or doing extra homework over the weekend — but, oftentimes, we just have to power through the busy days. On these busy days, it might not be realistic to carve out over an hour of time to trudge up to the gym, work out and then shower afterward. And that’s OK. On days such as these, it’s better to opt for smaller solutions like deep breathing and turning on some music while working, if possible.

And if you dread the gym so much that you can’t enjoy your workout at all, then there’s little purpose in going. Intense cardiovascular exercise isn’t the only form of exercise that works as stress relief. Studies suggest that a short walk may be just as effective for stress and anxiety relief as a 45 minute cardiovascular workout, according to the Anxiety and Depression Association of America. Walking is easier on the body and often more meditative than a hard workout — but walking still comes with many of the same health benefits as an intense workout at the gym, like running.

Of course, there’s also yoga, which is a mind-body practice and, therefore, an integrative form of stress relief. The poses are accessible for most bodies, and you don’t need to belong to a studio or pay for a class to reap the benefits. YouTube has pages of sequences that range from 10 minutes to an hour, or you can create a routine yourself. Like walking, yoga isn’t as intense of an activity as running, but practitioners can still reap many of the same benefits.

Even if you like cardiovascular exercise and you frequent the gym, it’s still a good idea to practice other forms of stress relief to avoid rigidity. Rigid routines — like going to the gym daily, for example — can begin to work counteractively and cause more stress than they relieve.

The body needs physical rest days in order to avoid injury, repair muscle and just rejuvenate. Rest, according to Healthline, is just as important as exercise itself. Stress, on the other hand, doesn’t take rest days — especially for college students.

On a similar note, we operate within a culture that loves to praise rigid routines and prioritizing exercise. Oftentimes the latter is healthy, but sometimes, it just isn’t.

Studies suggest that college students are among the most at risk for developing compulsive exercise habits — an overwhelming need to work out that becomes physically, socially and mentally debilitating. While this often goes hand in hand with eating disorders — which college students are also disproportionately at risk for developing — sometimes compulsive exercising stands alone. Either way, it can be difficult for people who have a history of compulsive exercise to use it as a form of stress relief. In fact, they probably shouldn’t, explains Courtney Howard, a director at Eating Disorder Hope.

“Many people tout the benefits of engaging in exercise to relieve anxiety. This can be tricky for anyone in recovery from an eating disorder, particularly those who exercised compulsively while they were unwell,” Howard writes. “There are ways to determine whether you are exercising in a mindful and [healthy] way, but when in doubt it is often best to choose an alternative method of stress reduction.”

This isn’t to say don’t exercise to relieve stress. But other methods of stress reduction like writing, social interaction and cooking need to also be part of the daily routine. And exercise shouldn’t be causing more stress than it relieves.