Walking shelter dogs can reduce stress for veterans with PTSD 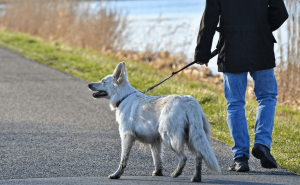 Shelter dogs need to be walked. Veterans with post-traumatic stress disorder need ways to reduce stress. A recent study suggests a way to accomplish both.

The study, published in Anthrozoös in March, showed that some military veterans with PTSD symptoms who walked a dog from an animal shelter for 30 minutes four times a week significantly reduced their stress. The data suggests that dog walking could be developed into a practical and affordable treatment option for veterans with PTSD.

According to the U.S. Department of Health and Human Services, up to 20% of U.S. military veterans who served in the Iraq War experience PTSD in a year, and about 30% of Vietnam War veterans have had PTSD during their lifetime.

To assess study participants, researchers monitored physical indicators of stress, such as heart rate and hormone and enzyme levels. Measurements were taken before, during and after the participants walked dogs. For veterans with lower symptoms of PTSD, dog walking led to decreased cortisol, indicating a decrease in stress. For people with high PTSD symptom severity, however, walking with a dog did not lower stress.

The veterans taking part in the study also took walks with people to provide data that the researchers could compare to the results from the dog-walking trials. Data collected found that veterans with severe PTSD symptoms experienced increased amounts of stress when walking with a person, while veterans with more mild symptoms did not experience any change in stress.

Dog walking likely reduces stress in many other people, not just people who have PTSD, and could help patients with other types of stress and mental illness, Cheryl Krause-Parello, PhD, lead author of the study, told The Nation’s Health.

“This could be helpful for anyone who is looking for mental health services and are maybe not getting the therapy responses that they hoped for,” said Krause-Parello, who is also director of Canines Providing Assistance to Wounded Warriors at Florida Atlantic University’s Christine E. Lynn College of Nursing.

Animal-assisted interventions or animal interactions could be an adjunct to traditional therapeutic treatment, she suggested.

Because the study lasted only eight weeks and had a relatively small sample size of 30 veterans, Krause-Parello emphasized the need for further research.

She and her team also studied the stress levels of shelter dogs to determine if they, too, experienced stress reduction from the walks. Those results have not yet been released.

“Considering the large number and availability of shelter dogs in the United States, it really makes sense to consider the potential for these dogs to be involved in a unique intervention that combines the benefits of human-animal interaction with the benefits of altruistic action like volunteerism,” said study co-author Erika Friedmann, PhD, a professor and associate dean for research at the University of Maryland School of Nursing, in a news release.